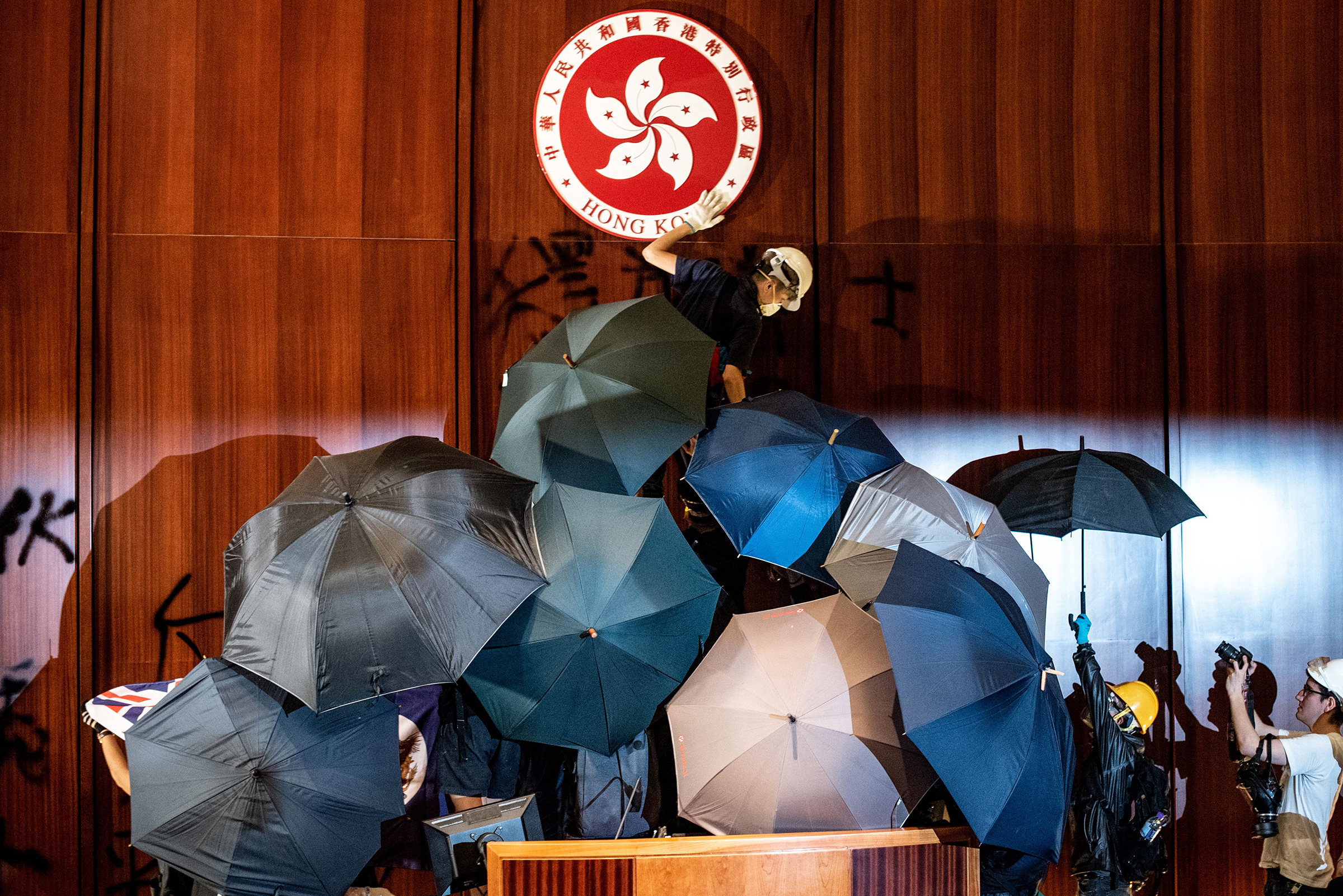 The 22nd anniversary of Hong Kong’s retrocession to China degenerated into anarchy Monday, after protesters smashed their way into the legislature and ransacked the offices. The brief occupation culminated in clashes around midnight as riot police dispersed the holdout protesters with volleys of tear gas.

Street clashes bookended the anniversary, starting in the early morning. Protesters occupied Harcourt Road and Lung Wo Road—major thoroughfares in the political heart of the city—and armed themselves with bricks and metal poles taken from a nearby construction site. Police responded with pepper spray and batons.

Demonstrators began besieging the legislature by midday. In the late afternoon, some used metal poles as battering rams and broke through the glass doors at the building’s entrance. Others tore down part of the building’s fence and dismantled a gate.

At around 9:00 p.m., the heavy police presence cleared out and protesters shattered both of the legislature’s public entrances. As they surged inside, they destroyed surveillance cameras and sprayed the facility with graffiti. “H.K. Gov f–king disgrace” was painted in large black letters overlooking the foyer. Another prominent message read, “Hong Kong Is Not China.”

Large oil portraits of Hong Kong’s deeply unpopular leaders were defaced and destroyed by the enraged mob, which freely rampaged through the corridors.

Shortly before 9:30 p.m., protesters breached the debating chamber and set about vandalizing the seat of Hong Kong’s unrepresentative government. They unfurled the colonial Hong Kong flag over the president’s desk and defaced the emblem of the Special Administrative Region, as China refers to the enclave.

In a highly symbolic act, a protester tore up a copy of Hong Kong’s post-colonial constitution and scattered the pages over the chair. A banner reading “There are no rioters, only a tyrannical government” was placed behind it.

Protesters gathered outside the government headquarters in Hong Kong on July 1, 2019, on the 22nd anniversary of the city's handover from Britain to China.
Dale de la Rey—AFP/Getty Images

Shortly after the building was stormed, protesters could be seen hauling in supplies and reinforcing barriers, as though preparing for a prolonged occupation. But three hours later, columns of police began to move toward the premises. The Hong Kong Police Force said the building had been “violently attacked” and “illegally” entered.

With police outside preparing to sweep the legislature, protesters occupying the chamber held a deliberation over whether or not to stay. One protester removed his face mask and stood up on the chamber desks, shouting, “We really cannot afford to lose anymore.”

“This is something that we should seriously condemn, because nothing is more important than the rule of law in Hong Kong,” she said. “So I hope the community at large will agree with us that with these violent acts that we have seen, it is right for us to condemn it and hope society will return to normal as soon as possible.”

At her pre-dawn press conference Tuesday, the Beijing-backed leader also insisted her government has responded to protester’s complaints over a now-suspended bill that would allow extradition to mainland China. The proposal, she said, will die at the end of the legislative session in July 2020.

The government initially said the law was necessary to prevent Hong Kong from becoming a haven for criminals; detractors say Beijing will use it to order the arrest of dissidents and critics. In any case, the protesters’ original demand—that the extradition bill be withdrawn—has been eclipsed by a broad push for greater democracy and a repudiation of Chinese sovereignty itself.

Asked what message he had for the Chinese government on the anniversary of Hong Kong’s reunification with China, protester Don Lee, 26, said: “I’d tell them that we want universal suffrage.”

Earlier in the day, hundreds of thousands of peaceful protesters, including families and young kids, took part in a march from Victoria Park calling on Lam to step down.

After the morning’s disturbances, police attempted to persuade organizers to call off the procession, but they refused. Police sealed off part of the park, the march’s starting point, and, citing a “serious safety threat,” refused to give permission for marchers to proceed through the Admiralty district, where Hong Kong’s legislature and government offices are located.

“China needs to respect our rights as Hongkongers,” said Juliana, a 34-year old advertising worker, defying police to march with others. She added: “The situation is very tense because our government is not acting in the best interest of Hong Kong.”

As marchers began to arrive in Admiralty in the late afternoon, they reinforced those who had set up barricades across Harcourt Road, swelling the crowd considerably. Protesters passed out face masks and carted trolleys filled with bricks.

A protester in her mid-20s, who would only give her name as Mary H. and stated that she was a civil engineer, said “Today is the flag raising ceremony. We wanted to be here early to show our opposition to that. Everything the Chinese government is doing is suppressing our freedoms.”

The deteriorating security situation also forced a humiliating scaling down of a morning flag raising ceremony meant to be a focus of national pride.

Some 5,000 police, including armed marine police, had been deployed to put the area around the Hong Kong Convention and Exhibition Centre on lockdown. A small, carefully vetted audience gathered there in the morning to watch, on closed-circuit television, the flag raising taking place outside.

The government said the indoor location was to spare guests from having to stand in the light drizzle, but there could only have been relief that dignitaries were shielded from the violent unrest breaking out nearby. At a flagpole less than a kilometer away, a Chinese flag was taken down by protesters overnight and the Black Bauhinia, the emblem of the Hong Kong rebellion, was run up in its place. Black-clad protesters attempted to march on the Convention Centre as the ceremony was taking place but were repelled by police.

“I know that the Government has a lot to improve,” Lam said in her address to the official gathering. “We will continue to listen to the community’s views and make continuous improvement to our work.”

Protesters and members of the media are seen in the chambers after demonstrators broke into the government headquarters in Hong Kong on July 1, 2019.
Anthony Wallace—AFP/Getty Images

Democratic legislator Helena Wong heckled Lam’s speech—an unheard of disruption at what is normally a tightly choreographed event—and was evicted from the hall.

The furore over the bill has laid bare political and social faultlines in the former British colony. Monday’s clashes come in the wake of an unruly rally Sunday that saw pro-government mobs abuse and assault journalists and foreigners. Scuffles and tense standoffs between pro- and anti-government groups also took place in the area around the legislature and central government offices.

Local media meanwhile reported late Sunday that a 29-year-old woman had fallen to her death from the retail podium of the International Finance Centre, after leaving a Facebook post saying that she would not be attending anti-government protests planned for today and encouraging Hongkongers to ga yau. Literally meaning “add oil,” in the sense of injecting fuel into a tank, the Cantonese phrase is a common exhortation among protesters.

Her death follows that of a 35-year-old man who died on June 15 after unfurling a protest banner on the side of a shopping mall, and a 21-year-old student, who fell from a building yesterday after leaving a note calling for Lam’s resignation. Memorials for all three are planned today.

University student Nicole Cheung, 19, said the deaths “make us heartbroken. I respect them but I don’t want anyone to do the same. We want everyone fighting to see the future.”

Kandice, an 18-year-old protester, who had written the deceased student’s last words on her back, added: “The whole government system is the problem. This is not democracy.”