Migrants who were detained by U.S. Border Patrol agents are seen in a jail at the Central Processing Center in McAllen, Texas, USA on June 17, 2018.
Anadolu Agency—Getty Images
By Tara Law

U.S. Customs and Border Protection (CBP) has vowed to make “hands on” changes after a second migrant child died in its custody in less than three weeks. But pediatricians who have toured its facilities say the new guidelines may not be enough to prevent future deaths.

The new guidelines, announced Wednesday, require more thorough medical screening of children after they are taken into custody. They also call for the deployment of additional border patrol agents with emergency management training to remote areas, Secretary of Homeland Security Kirstjen M. Nielsen said in a statement. U.S. Customs and Border Patrol will also provide medical checks for every child in custody.

“Moving forward, all children will receive a more thorough hands on assessment at the earliest possible time post apprehension – whether or not the accompanying adult has asked for one,” Nielsen said.

Nielsen’s comments come shortly after her agency opened talks with the American Academy of Pediatrics (AAP) to coordinate to develop new guidelines for the care of children, according to AAP leaders.

However, some pediatricians who treat migrant children say that the Department of Homeland Security needs to do more to protect children in its custody, and that the facilities as they exist now are inappropriate — or even life-threatening — for the children being housed there.

Dr. Martha Griffin — a co-chair of the AAP’s Special Interest Group on Immigrant Health who works with families released from CBP custody and says that she has toured border patrol stations in Texas four or five times between 2015 to 2017 — says that the new guidelines are not enough to correct the most serious threats to the health of children in CBP custody. And, she tells TIME, conditions in CBP checkpoints are especially bad for children.

Griffin says in the facilities she has toured, she saw holding areas that are freezing cold and are constantly lit. Detainees sleep wrapped in Mylar blankets on mats on cement floors, she says, are given poor food, and they cannot shower or brush their teeth. Griffin also says that CBP is a law enforcement agency, and neither its agents nor its medical care providers are trained to handle children.

“They’re set up for law enforcement to catch drug dealers and people who shouldn’t be in our country — not asylum seekers,” Griffin says. “It’s no place for a well child, let alone a sick child.”

Customs and Border Patrol was not able to comment on the conditions of its facilities because its communications team is on hiatus due to the government shutdown. But CBP head Kevin McAleenan denied to Arizona Central in September that the facilities are particularly cold. According to McAleenan, migrants often feel uncomfortable because they grew accustomed to hot weather during their journeys. “We have written policies on everything from temperature of the facilities, to temperature of the food, when it’s served, to the quality of the food, and then we follow up on that rigorously,” McAleen said in September.

Nevertheless, Griffin’s description is consistent with accounts by migrants and others who have visited CBP facilities.

Dr. Julie Linton, who also co-chairs the AAP’s Special Interest Group on Immigrant Health, has also toured the facilities and says they are unacceptable for housing children.

According to Linton, the processing centers have a toxic combination of factors harmful for children’s health: poor sleeping conditions, controlled access to food and water, and a variety of stressors, including chain-link cages and border guards. Children are also particularly vulnerable to influenza, which can spread rapidly in overcrowded border patrol facilities. Such conditions are particularly bad for children who are already sick, Linton says, because they need “ongoing supportive care” to ensure they can recover.

Once children become sick, their condition can deteriorate within minutes or hours, says Linton. Sick children can become dehydrated quickly, and they may rapidly go into shock. Children are often unable to get fluids for themselves, and are sometimes unable to say how they’re feeling — especially if they’re stressed or scared, Linton says.

A boy carries a picture of Guatemalan seven-year-old Jakelin Caal, who died in a Texas hospital two days after being taken into custody by US border patrol agents in a remote stretch of the New Mexico desert.
JOHAN ORDONEZ—AFP/Getty Images

On Christmas Day, authorities confirmed that an 8-year-old Guatemalan boy had died just before midnight at a New Mexico hospital after being held in a CBP checkpoint for nearly two days. The child, identified by Guatemalan authorities as Felipe Gómez Alonzo, was initially diagnosed with a cold, but when doctors discovered he had a fever while he was being evaluated for release, the boy was prescribed medicine and allowed to stay at the hospital for an additional 90 minutes before being taken back to the holding facility. He returned to the hospital with nausea and vomiting and died shortly thereafter, according to the CBP.

The boy’s death comes just weeks after a 7-year old Guatemalan girl became the first children to die in Customs and Border Patrol Custody in more than a decade. The child, identified by a Guatemalan official as Jackeline Caal, appeared in good health when she and her father were detained on a remote stretch of the U.S. border, but was not breathing by the time she arrived at a Border Patrol station, according to a statement by the Department of Homeland Security. Emergency medical technicians revived her and she was flown to a hospital in El Paso, Texas, where she was found to have swelling in her brain and liver failure, officials said. She later died.

Following the children’s deaths, Nielsen announced plans on Wednesday to address what she described as an “unprecedented surge of children into our custody.”

Nielsen said that the situation at the border has been “pushed to a breaking point” by a recent surge of migrants. Over the last two months, Nielsen said 139,817 migrants have been apprehended, compared to 74,946 over the same period last year — an 86% increase. The border patrol stations, where both of the deceased children were first held, are also not designed for long-term use, Nielsen said, which makes it more challenging to hold migrants.

The CBP also said in a statement that it needs the support of other government agencies to provide medical care. The agency said that it “is considering options for surge medical assistance” from the Coast Guard, and might request assistance from the U.S. Department of Health and Human Services, the Department of Defense and the Federal Emergency Management Agency.

Linton says CBP should ensure that medical personnel have pediatric training, because treating a child is different than caring for an adult. Subtle clues — such as a fast heartbeat or a sunken fontanel (the spaces between the bones of the skull in an infant) — can hint that a mildly ill child is about to take a turn for the worse.

Linton and Griffin both say that there are steps that CBP can take to make the facilities safer, such as permitting an independent oversight committee to review the detention centers at random.

However, Linton argues that the bottom line is that children should not be in detention at all — regardless of whether the facilities are controlled by CBP or by ICE.

“No amount of time in detention is safe for a child,” Linton says. 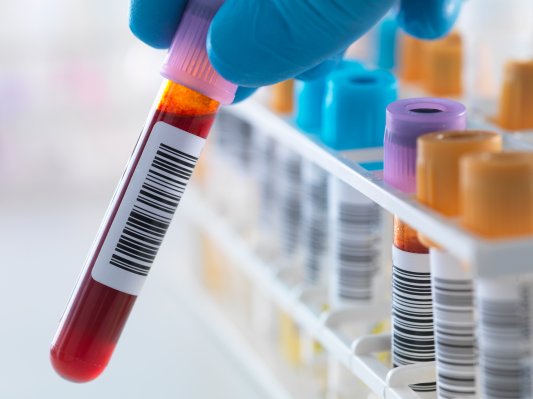 3,000+ Patients Possibly Exposed to HIV in NJ Facility
Next Up: Editor's Pick