Stranger Things Season 2 Is Your Halloween Binge. Here's What to Know Now

Update: Since the publication of this article, a new trailer for Stranger Things season 2 has been released.

The wait for Stranger Things season 2, one of the most anticipated Netflix shows of the year, is almost over.

Gather as much chocolate pudding as you can carry because the new season of Stranger Things hits Netflix on Oct. 27. The Halloween-themed season will continue to evolve the Stranger Things plot from the first season, which left fans with several pressing questions and theories.

Just how many episodes of Stranger Things can fans expect? All together, season 2 will consist of nine new installments. See the titles of the episodes from what co-creators Matt and Ross Duffer have dubbed Stranger Things 2 in a nod to cinematic sequels: “Madmax,” “The Boy Who Came Back to Life,” “The Pumpkin Patch,” “The Palace,” “The Storm” and “The Pollywog.”

But leave it to Stranger Things to make everything a mystery. It seems as though some of the episode titles may have evolved as a new trailer teases unnamed chapters 7-9. (They were previously titled “The Secret Cabin,” “The Brain” and “The Lost Brother.”)

A critical darling, Stranger Things scored 18 Emmy nominations including one for outstanding drama series, as well as acting nods for Harbour and Brown. Unexpectedly, Shannon Purser, who played the beloved Barb, was also nominated.

The Stranger Things season 2 trailer opens on everyone’s favorite squad at a local arcade playing the adventure video game Dragon’s Lair. Will’s back from the Upside Down with a serious case of PTSD. Case in point: Will “sees” a massive arachnid-like monster there to make sure everyone’s lives stay nice and high-stress.

But the biggest revelation? We see Eleven reaching through a wall and into the school, confirming that she’ll be back in the Stranger Things mix.

Overall, the trailer goes for a spooky vibe. The boys even appear in period-appropriate costumes from Ghostbusters. Over on the cool side of smalltown America with Nancy and Steve, there are more references to 1984 cultural touchstones at a Halloween party (see: Risky Business’s and Madonna’s “Material Girl”).

But midway through the trailer Vincent Price’s famous “Thriller” voiceover kicks in, and it’s clear that something even more horrific than the first season is threatening Hawkins: an inky new multi-limbed monster seemingly out to lay waste to the town. More good news: Will says he can feel it “everywhere.”

While the Stranger Things trailer doesn’t reveal any of the show’s new faces, Netflix announced that there’s a new family in town. Billy (Dacre Montgomery) is the brother of tough skater girl Max (Sadie Sink), who befriends Dustin and Lucas. As for Billy, he “doesn’t exactly make friends.” Meet Max in the video below.

Stranger Things Characters: Then and Now

The show begins right before Halloween in 1984, nearly one year after the first installment.

And in the final moments, we saw Will cough up a slug in front of the bathroom mirror, suggesting the Upside Down was still in his system, and potentially, the Hawkins sewer system, which should bode well for everyone!

In the aftermath of season one, Will’s getting routine brain tests, which people are closely monitoring. He also seems to be in touch with the bigger, badder monster more than the others, proclaiming it isn’t after him, but it does want “everyone else.”

Let’s check in on the others: Joyce is dating her old high school classmate Bob (played by Sean Astin, who starred in 1985’s The Goonies, which inspired the show). Officially, Hopper is trying to cover up all the disaster from season 1. But he’s still on the hunt for the truth. “Whatever’s happening is spreading from this place,” he declares in the trailer. We also hear Mike say to Eleven: “If you’re out there, just please give me a sign.” It looks like he’s about to get one.

Nancy misses Barb. Poor Barb and everyone whose life she touched.

One popular Stranger Things theory is that The Upside Down is just a friendly dimension that’s a portal to another, much worse dimension.

Also of note: Eleven seems pretty casual when she’s reaching through the wall, meaning perhaps she’s in a sort of limbo that isn’t as perilous as what’s coming for everyone now.

There might be three more Stranger Things seasons coming after the conclusion of season 2.

“We’re thinking it will be a four-season thing and then out,” co-creator Ross Duffer told New York magazine in August.

At that point, it seemed fans would have to find another way to experience joy in life. But in September, producer Shawn Levy told Entertainment Weekly they might feed the frenzy with five seasons.

“The truth is we’re definitely going four seasons and there’s very much the possibility of a fifth. Beyond that, it becomes I think very unlikely.” 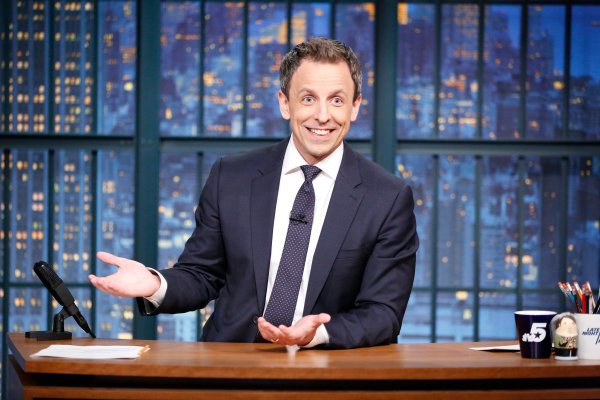 'If You Like Trump Then Go Away.' Seth Meyers Takes Inspiration From Eminem's Anti-Trump Rap
Next Up: Editor's Pick