That sound you heard in Miami on Wednesday evening? El partido demócrata dando un fuerte giro a la izquierda. The screech of a Democratic Party swerving hard to the left.

As the first 2020 Democratic debate wrapped here, there was a palpable sense that the 10 contenders on stage were reflecting the sentiments of the most liberal corners of the party. Corporate consolidation, the end of private health insurance and the rights for transgender individuals sparked tremendous imagination in the debate hall. The notion that pharmaceutical companies should be punished for the opioid crisis caught many business-minded voters’ attentions. Candidates tried to out-do one another by answering questions in Spanish.

The evening included just half of the 20 top contenders seeking the nomination. The balance, including frontrunner Joe Biden and progressive bulwark Bernie Sanders, will debate Thursday. But already, at halftime of the first major face-to-face meeting of the Democratic presidential candidates, it’s clear that the liberal voices that dominate Twitter and cable news are at least shaping many of the contenders’ theories of how to win.

“On many issues, the floor of the debate is higher than the ceiling was just a few years ago,” said Adam Green, executive director of the Progressive Change Campaign Committee, who was wearing a “#WarrenWing” lapel pin. “The progressive issues that were advanced here might be on the outside in Washington, but are clearly in the center of where the American people are.”

But some of the positions put forth in Miami may stymie moderates’ willingness to vote President Donald Trump from power. Of the 10 candidates on stage, two — Massachusetts Sen. Elizabeth Warren and New York City mayor Bill de Blasio — raised their hands when asked if they would abolish the private health insurance system, a position that would have been considered campaign-ending not long ago.

Warren said she agreed with Sanders, who describes himself as a democratic socialist, on the issue: “I’m with Bernie on Medicare for All.”

The Trump campaign seized on this after the debate, releasing a statement slamming Democrats for wanting to “throw 200 million people off their current private healthcare plans, put them into a government-run system that would eliminate choice and crush innocent Americans with an enormous tax burden to pay for it.”

The Trump campaign has tried to seize opportunities to paint all Democratic candidates as socialists, an effort they especially hope will work with Latino voters in Miami. A large banner outside the debate hall reading “No socialismo, no comunismo, somos capitalista” became a gathering point for protesters in the hours before the debate, some of them waving “Trump 2020″ flags.

Wednesday’s debate also highlighted how some previously controversial immigration proposals have gone mainstream. Pushed by former Secretary of Housing and Urban Development Julian Castro of Texas, the only Latino candidate in the race, most other candidates ended up indicating they would be open to decriminalizing illegal border crossings.

Castro was the first candidate to release a detailed immigration policy in April, forcing several other candidates to answer whether they support different measures of immigration reform. In it he called for the repeal of Section 1325—a law which makes unauthorized entry a federal misdemeanor—in a move long advocated by immigration activists. When pressed a few days before the debate, Warren also came out in support of his proposal, which would treat unauthorized border crossings as a civil offense.

When O’Rourke, a fellow Texan, did not agree on stage in Miami, Castro saw an opening to pounce.

“I think it’s a mistake, Beto, and I think if you truly want to change the system, then we got to repeal that section” [of the law], he said. “If not, it might as well be the same policy.”

Just the mere mention of other topics marked a shift from even four years ago.

The Democrats intentionally and repeatedly brought up the rights of transgender individuals. Asked about abortion rights, Castro said the health care system mustn’t “forget someone in the trans community, a trans female, [who] is poor. Doesn’t mean they shouldn’t have the right to exercise that right to choose.” Tulsi Gabbard was asked to explain past comments seen as anti-LGBT rights. And Booker, who is African-American, likened the current spike in violence against transgender individuals to “lynching.”

The chords the Democrats struck on corporations were different from past debates as well. O’Rourke noted that no drug executives have spent time in jail for their role in the opioid epidemic; under an O’Rourke administration, the former Texas congressman said, “we will hold them to account.” Booker said drug companies “should absolutely be held criminally liable.” Talk like this stands to put Wall Street and business on high alert—along with plenty of voters as well.

Stylistically, some candidates’ attempts to speak Spanish were among the most memorable moments of the night in Miami, a city where 70% of the population is Hispanic. O’Rourke switched to Spanish seconds into his first response to a question about whether he would support a 70% marginal tax rate for individuals, as some Democrats are. (O’Rourke did not answer the question in either language.)

Not to be outdone, Booker soon followed suit, denouncing Trump’s “attacks and demonization” of immigrants in a forcefully delivered español. Castro, who as the only Latino in the race has been criticized for not being fluent in Spanish, sounded the most at ease as he spoke a few simple sentences in his closing statement.

“I don’t think necessarily it’s as effective as they thought it was,” said Luis Miranda, a former Democratic National Committee communications director and White House director of Hispanic media. “It’s not necessarily a winner, but it definitely helps in a debate being broadcast on Telemundo.”

Not all candidates tacked left: Minnesota Sen. Amy Klobuchar notably painted herself as a pragmatist capable of winning over Trump voters. And top Biden aides, speaking after the debate, said the former Vice President would not follow down his rivals’ hyper-liberal path. Biden sought to distance himself from the Medicare for All push, with aides saying the former Vice President prefers to build on Obamacare, not scrap the existing system.

While the candidates Wednesday sought to rip power away from Senate Majority Leader Mitch McConnell to control the Senate floor, Biden has preached compromise. “No shortage of bold and progressive plans from him, but he has a unique vision for what actually transformational change is,” said Kate Beddingfield, Biden’s deputy campaign manager.

Biden may be a lonely figure at center stage Thursday if he continues to hug the center.

Write to Vera Bergengruen at vera.bergengruen@time.com and Philip Elliott at philip.elliott@time.com. 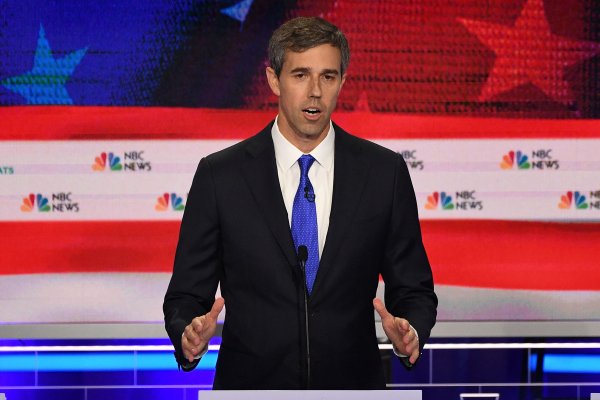