Some Democratic presidential candidates leaned on their Spanish language skills during the first Democratic primary debate on Wednesday.

The debate, which aired on NBC and MSNBC, was also broadcast on Telemundo platforms, making it the first Spanish-language channel to host a Democratic presidential debate. About 41 million U.S. residents speak Spanish at home, according to the U.S. Census Bureau.

O’Rourke, who represented a border district and speaks fluent Spanish, kicked things off early in the debate, breaking out in Spanish in answer to the first question addressed to him about the top individual tax rates.

Later, when the debate topic moved on to immigration, O’Rourke answered in Spanish again. Asked what he would do on his first day as president to deal with the immigration crisis at the U.S.-Mexico border, O’Rourke said:

“Vamos a tratar cada persona con el respeto y dignidad que merecen como humanos … We would not build walls, we would not put kids in cages.” His answer loosely translates to: “We will treat each person with the respect and dignity they deserve as humans.”

O’Rourke’s first response in Spanish earned him some serious side-eye from Sen. Cory Booker, who took his chance to speak Spanish when the subject turned to immigration. Asked what his first day as president would look like, Booker said, “La situación ahora es inaceptable. Este presidente a atacado a demonizado los inmigrantes es inaceptable. Voy a cambiar este.”

As the first debate wrapped up, candidate Julián Castro, who while not fluent, spoke Spanish with ease on stage, said: “Me llamo Julián Castro y estoy postulando por presidente de los estados unidos,” which loosely means, “My name is Julián Castro and I am running for president of the United States.”

Castro ended his final statement with just another touch of Spanish: “On January 20, 2021, we’ll say adios to Donald Trump.”

Democratic candidates slated to speak during the second debate on Thursday expressed some nervousness about their Spanish abilities. 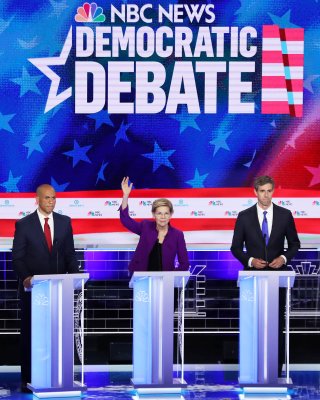 Democrats Are Divided on the Future of American Healthcare
Next Up: Editor's Pick