A British Politician Grabbed a Climate Protester by the Neck and It's Dividing the U.K.

A video showing a U.K. Member of Parliament aggressively grabbing a female climate protester by the neck and marching her out of a banquet dinner is dividing the country.

The footage, filmed by TV news cameras on Thursday night and widely shared on social media, shows Mark Field, who is also a minister in the Foreign Office, pushing the woman against a pillar, grabbing her by the back of the neck and forcing her out of the room.

The activist, Janet Barker, was one of dozens Greenpeace activists who interrupted a black-tie dinner for London’s banking elite to draw attention to the climate crisis. They were dressed in suits, red dresses and sashes with “climate emergency” on them.

Following the release of the video, Field was suspended as a minister in the Conservative party and apologized to the activist. In a statement released on Friday, before he was suspended, he said he reacted “instinctively” and said he was worried the woman may have been armed.

Barker told the BBC that Field’s actions were “over the top” and that he “should go to anger management classes.” However, she said she will not press charges with the police.

A spokesperson for Prime Minister Theresa May said she had seen the footage and “found it very concerning.” Greenpeace has accused Field of assault and May’s spokesperson said, “The police have said they are looking into reports over this matter.”

Field was widely criticized, with thousands signing a petition demanding he be fired from the government, but others have defended him.

Peter Bottomley, a Conservative MP, congratulated Field. “Not intervening often has a cost and if it becomes a fashion there will be casualties,” he told the BBC.

Many others chimed in on social media to say that Field should be given a medal.

The incident took place at Mansion House, the official residence of the mayor of London, where U.K. Chancellor Philip Hammond made his annual speech about the state of the U.K. economy to an audience of bankers and politicians.

London Mayor Sadiq Khan tweeted on Friday morning: “It is truly shocking to see this kind of behavior from an MP. Violence against women is endemic in our society and this behavior is unacceptable. He should consider his position.” 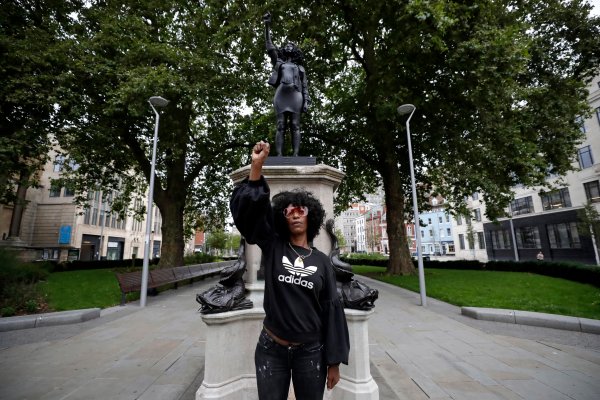