Sadiq Khan, the mayor of London, rebuked the United Kingdom’s efforts to welcome President Donald Trump for his three-day state visit to the European nation that begins Monday.

In an 841-word opinion piece published by The Guardian on Saturday, Khan condemns Trump for starting an immigration policy that separated children from parents, using racism and xenophobia as election tactics and introducing a travel ban on predominantly-Muslim countries.

“No, these are not the actions of European dictators of the 1930s and 40s. Nor the military juntas of the 1970s and 80s. I’m not talking about Vladimir Putin or Kim Jong-un. These are the actions of the leader of our closest ally, the President of the United States of America,” Khan writes.

Khan, the first Muslim to be elected London’s mayor, and a member of Britain’s Labour Party, warns readers of an expanding allegiance to far-right politics, and classifies Trump as “one of the most egregious examples of a growing global threat.”

Khan and the President have a contentious history. When terrorists killed eight people and badly injured 48 more during an attack on the London Bridge in 2017, Trump criticized the mayor in a tweet.

“At least 7 dead and 48 wounded in terror attack and Mayor of London says there is ‘no reason to be alarmed!'” Trump wrote. Though Khan’s fuller remarks were that Londoners should not be alarmed by an increased police presence in the days after the attack.

A spokesperson for the mayor called Trump’s tweet “ill-informed” at the time.

In his op-ed, the 48-year-old mayor writes that politicians on the far-right are “constructing lies to stoke up fear and to attack the fundamental pillars of a healthy democracy — equality under the law, the freedom of the press and an independent justice system.

“That’s why it’s so un-British to be rolling out the red carpet this week for a formal state visit for a President whose divisive behaviour flies in the face of the ideals America was founded upon.”

In light of these things, Khan argues, the Prime Minister should publicly decry Trump.

“Theresa May should issue a powerful rejection – not of the U.S. as a country or the office of the presidency, but of Trump and the far-right agenda he embodies. She should say that the citizens of the U.K. and the U.S. agree on many things, but that Trump’s views are incompatible with British values,” he says. 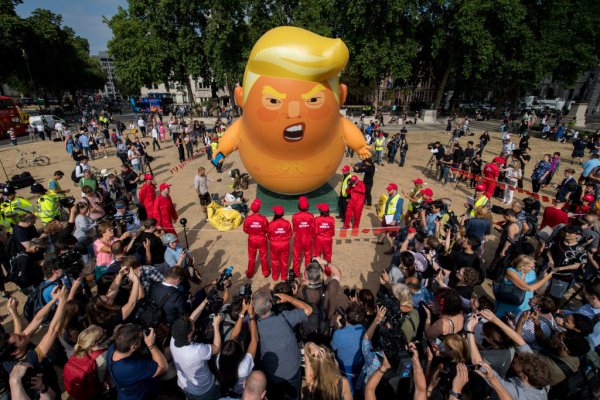 The U.K. Jeers and Cheers President Donald Trump As State Visit Begins
Next Up: Editor's Pick