A deer and a fawn are lost far from home, with no idea where they are or how they can get back to the woods. With the help of glowing antlers, curiosity and sheer will, the animals travel through wheat fields, abandoned subway systems and surreal sewers to make it back where they belong. This is Way to the Woods, a video game for PC and Xbox One due out in 2020 from an independent, 20-year-old developer named Anthony Tan.

Following in the footsteps of similar so-called “pacifist” games like Journey, Firewatch and Night in the Woods, Way to the Woods is aimed at gamers looking for adult experiences that don’t rely on violence to tell a compelling story. While President Donald Trump and others continue to suggest a connection between violent video games and mass shootings despite a lack of evidence, there has been a notable spike in games like Tan’s that are more about exploration, story and design than racking up a body count. And the largest businesses in the nearly $44 billion industry are bringing their considerable resources to bear.

“Personally, I like content that engages with the player by being fun, or charming, or compelling,” says Tan. “I’m inspired by creators whose work carries this fire of positivity, optimism, and hope.”

Non-violent games have existed since the medium’s earliest days — there’s no bloodshed to speak of in Pong or Tetris. What makes this modern crop of pacifist games different is that they often deal with mature concepts like loss, grief and interpersonal relationships. In 2013’s Gone Home, for instance, players explore a character’s empty home, searching for signs of a missing family. It sold nearly 1 million copies and won gaming site Polygon’s Game of the Year award in 2013.

“I love games that tell a different kind of story,” says Meghan Camarena, a gamer and YouTube streamer with over 1 million subscribers on her channel, Strawburry17. “What Remains of Edith Finch, Donut County, and Florence are just a few that change the way you look at playing a game. They’re story driven and incredibly captivating. Those are the games I want to play.”

Kells Tate, owner of CatBean Games and co-lead developer of the upcoming Calico, a cat café simulator with a magical bent, adds that pacifist games offer an escape from what often seems like an increasingly hectic, violent reality. “People are generally really stressed out right now,” she says. “I think a lot of people, like myself, started getting tired with the detached and unemotional way cynicism deals with real-world issues, and now we just want to genuinely and emphatically respond to what’s going on in the world.”

For developers, pacifist games offer the chance to think differently about their work. “I had to take a break from those murder simulators,” says Laurent Bernier, who worked on titles like Assassin’s Creed and Far Cry before co-founding indie gaming studio Breaking Walls. “Eventually you realize those images get printed on your brain. It gets under your skin at some point.” Now, he’s helping to create AWAY: The Survival Series, in which players explore Madagascar while taking the form of different animals.

Chris Charla, senior director of Microsoft’s ID@Xbox program, says two changes in the gaming industry over the past decade opened the door for the rise of pacifist games — or “cozy games,” as he calls them: digital distribution and access to game creation tools. In the late 2000s, it became increasingly easy for console gamers to buy and download titles directly over the internet. Removing the need to print discs and ship them to stores greatly reduced the cost of producing games, leading publishers to experiment with new approaches. Around the same time, it became simpler to make games in the first place. Video game engines — the underlying software powering games — like Unity and Epic’s Unreal Engine were made free for many developers, dramatically reducing the cost of entry.

Together, these developments resulted in more games being created, by a larger, more diverse group of designers, while it’s easier than ever for players to access those games. “We’re starting to see more and more stories coming from underrepresented voices,” says Charla.

The major game console makers are acknowledging the rising interest in less traditional games. Nintendo has leaned into it with series like Animal Crossing. Sony has played host to an increasing number of pacifist games, like Flower and Journey. And Microsoft brought at least three “cozy games” to E3 this year, including Spiritfarer and Hyperdot.

“These games have always sold well and had huge communities,” says Tate. “The only thing that has changed is the industry, and more specifically the decision makers, are only just starting to accept them as successful and worthwhile.”

Shooters and fighting games continue to dominate each year’s best-seller lists, and they’re unlikely to go away any time soon. But, thanks to independent games developers experimenting with new ideas, we’re witnessing a rapid expansion of what’s possible in the medium.

“I think I heard the American rapper Vince Staples say in an interview that if he can’t ‘win a championship or kill nobody’ in a game, then it’s not for him. And I get that,” says Tan. “But I reckon the industry is shifting to also understand that there are loads of people who are on the complete opposite side of the spectrum, and would rather play non-violent games.” 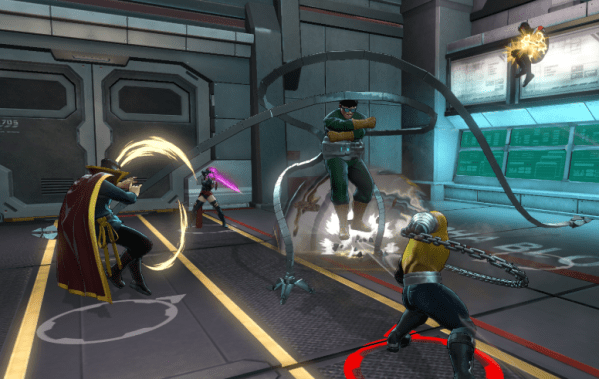 Marvel Ultimate Alliance 3 Is Only As Much Fun As the Friends You Play it With
Next Up: Editor's Pick