One of the many ironies of Donald Trump’s presidency is that for all his vitriol toward journalists — language that has been dangerously echoed by autocrats around the world — he is intensely interested in the inner workings of the media. Trump is fluent in the language of TV ratings, thanks in part to his Apprentice days. He remembers and cites stories from years back. He tracks and characterizes magazine covers like they’re votes.

All of which was on display as TIME’s Washington bureau chief Massimo Calabresi, White House correspondents Brian Bennett and Tessa Berenson, and I interviewed the President in the Oval Office on June 17, a day ahead of the formal launch of his 2020 campaign. An allotted 30 minutes for the interview and photo shoot stretched to more than an hour, as he brushed off press secretary Sarah Huckabee Sanders’ repeated calls for “last question.” At the outset of our session, Trump told me that he had heard TIME was doing well, cheering that as good news and citing a particular story he liked — even as he went on to blast his coverage in TIME as “a disgrace” later in the conversation.

The TIME team with President Trump and senior adviser Jared Kushner, who left at the start of the interview.
Paul Moakley for TIME

Also on display was the degree to which, 2½ years into his presidency, Trump has morphed the White House and its protocols to his unique personality. Noting that our dependence on oil from the Middle East has dropped sharply, he described Iran’s alleged attacks on oil tankers in the Persian Gulf region as “very minor,” even as his then Acting Defense Secretary dispatched 1,000 more troops to the Middle East in apparent response. As we sat around the Resolute desk, he beckoned aides to bring various documents for him to show us: a map marking the demise of ISIS; a birthday greeting from the North Korean dictator Kim Jong Un (“a very nice letter,” Trump called it); a typed list of his accomplishments as President that he distributed, one copy for each of us. The three-page document cites everything from decreased unemployment to pulling out of the Paris climate deal to calling for a defense force for outer space.

Photographer Pari Dukovic sets up for the cover shoot.
Paul Moakley for TIME

From our interview with Trump and weeks of reporting within his re-election campaign and the Republican National Committee, Brian’s cover story describes in remarkable detail how campaign manager Brad Parscale and his team — rather than trying to keep Trump from fulminating on Twitter or push him toward the political center in search of swing voters — are building and monetizing their operation around his style. As the President told us, with rare understatement, “I generally do my own thing.”

About those Trump covers: the President has said that he’s been on the cover of TIME more than anyone else. While that isn’t true — the record holder is Richard Nixon, who appeared there 55 times — Trump is accumulating covers at a rapid pace. This issue marks the 29th appearance by Trump, who’s been memorably captured inside the red border by a variety of photographers and illustrators.

The latest cover portrait was taken by Pari Dukovic, who photographed six covers for the 2019 TIME 100, and photo-directed by TIME’s Katherine Pomerantz and Paul Moakley. “President Trump surprised us by showing up early,” says Katherine. “Pari calmly engaged the President and got right to work — and within 12 minutes made this week’s cover.” 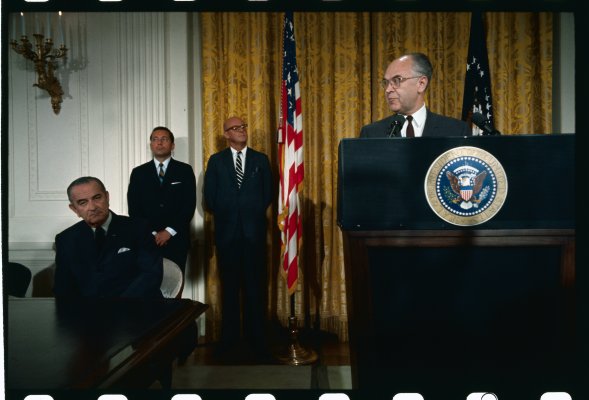 President Trump Said He Would Take Foreign Campaign Help. Here's What Past Candidates Did in That Situation
Next Up: Editor's Pick