Angelina Jolie: What We Owe Refugees

Who comes to mind when you picture a refugee? You probably don’t imagine a European. But if you were a child of World War II and asked your parents what a refugee was, they would probably have described someone from Europe.

More than 40 million Europeans were displaced by the war. The U.N. Refugee Agency was created for them. We forget this. Some of the leaders uttering the harshest rhetoric against refugees today trace their routes back to countries that went through tragic refugee experiences and were helped by the international community.

At the first sign of armed conflict or persecution, the natural human response is to try to take your children out of harm’s way. Threatened by bombs, mass rape or murder squads, people gather the little they can carry and seek safety. Refugees are people who’ve chosen to leave a conflict. They pull themselves and their families through war, and often help rebuild their countries. These are qualities to be admired.

Why then has the word refugee acquired such negative connotations in our times? Why are politicians being elected on promises to shut borders and turn back refugees?

Today the distinction between refugees and migrants has been blurred and politicized. Refugees have been forced to flee their country because of persecution, war or violence. Migrants have chosen to move, mainly to improve their lives. Some leaders deliberately use the terms refugee and migrant interchangeably, using hostile rhetoric that whips up fear against all outsiders.

Everyone deserves dignity and fair treatment, but we need to be clear about the distinction. Under international law it is not an option to assist refugees, it is an obligation. It is perfectly possible to ensure strong border control and fair, humane immigration policies while meeting our responsibility to help refugees. More than half of all refugees worldwide are children, and 4 of 5 of them live in a country that borders the conflict or crisis they have fled. Fewer than 1% of refugees are ever permanently resettled, including in Western nations.

American generosity means that our country is the world’s largest donor of aid. But consider Lebanon, where every sixth person is a refugee. Or Uganda, where a third of the population lives in extreme poverty, sharing its scarce resources with over a million refugees. Across the world, many countries that have the least are doing the most.

When I started working with the U.N. Refugee Agency, or U.N. High Commissioner for Refugees (UNHCR), 18 years ago, there were about 40 million forcibly displaced people and hope that the number might be falling. According to the UNHCR’s latest global-trends report, the number of forcibly displaced people today stands at over 70 million and is rapidly rising. From Myanmar to South Sudan, we are failing to help resolve conflicts in a way that enables people to return home. And we expect the U.N. to somehow deal with the resulting human chaos.

At the first session of the U.N. General Assembly, in 1946, President Truman laid upon member states the prime responsibility for creating peace and security. He said the U.N. “cannot … fulfill adequately its own responsibilities until … peace settlements have been made and unless these settlements form a solid foundation upon which to build a permanent peace.”

But the sad truth is, member states apply the tools and standards of the U.N. selectively. States often put business and trade interests ahead of the lives of innocent people affected by conflict. We grow tired or disillusioned and turn our diplomatic effort away from countries before they’ve stabilized. We seek peace agreements, as in Afghanistan, that don’t have human rights at their core. We barely acknowledge the impact of climate change as a major factor in conflict and displacement.

Rohingya Muslim refugees cross a canal as they flee over the border from Myanmar into Bangladesh at the Naf River on Nov. 1, 2017 near Anjuman Para in Cox's Bazar, Bangladesh.
Kevin Frayer—Getty Images

We use aid as a substitute for diplomacy. But you cannot solve a war with humanitarian assistance. Particularly when few humanitarian appeals anywhere in the world are even 50% funded. The U.N. has received only 21% of the 2019 funds needed for Syria relief efforts. In Libya the figure is 15%.

The rate of displacement last year was equivalent to 37,000 people being forced from their homes every single day. Imagine trying to organize a response to that level of desperation without the funds necessary to help even half of those people.

As we mark World Refugee Day on June 20, it is an illusion to think that any country can retreat behind its borders and simply hope the problem will go away. We need leadership and effective diplomacy. We need to focus on long-term peace based on justice, rights and accountability to enable refugees to return home.

This is not a soft approach. It is the harder course of action, but it is the only one that will make a difference. The distance between us and the refugees of the past is shorter than we think. 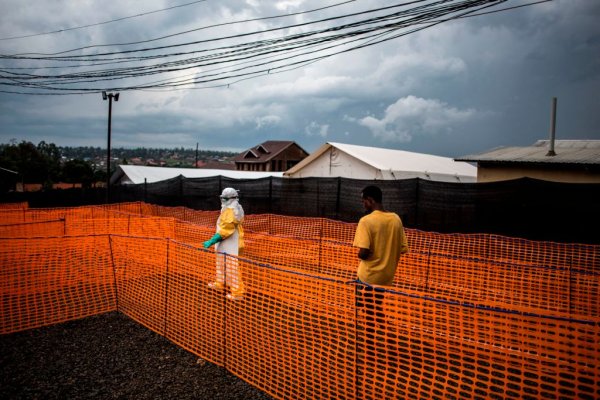 Ebola continues to spread in the DRC. Here's what you need to know
Next Up: Editor's Pick