Angelina Jolie: Why Women Are the Key to Lasting Peace in Afghanistan

Women in the old section of Herat, Afghanistan, on Jan. 9, 2018
Hoshang Hashimi—AFP/Getty Images
Ideas
By Angelina Jolie
Jolie, a TIME contributing editor, is an Academy Award–winning actor and Special Envoy of the U.N. High Commissioner for Refugees

When the Taliban seized power in 1996, it waged a war against Afghan women. Girls’ education was banned. Women were confined to the home and denied the right to work. They were flogged, beaten, mutilated and stoned to death for supposed immorality. This is not ancient history. These are living memories for millions of Afghans. And they have become present concerns, as U.S. government representatives negotiate with the Taliban about a settlement that could see it return to a position of power and influence in Afghanistan.

After the U.S. and its allies invaded Afghanistan in 2001, ending Taliban oppression of women was frequently described as a goal second only to the eradication of terrorist safe havens. Today, nearly a third of the Afghan parliament and civil service are women. Afghan women are professors, artists, journalists, lawyers and judges; they serve in the national police force and military. The nation’s ambassador to the U.S. is a woman. This progress is inspiring yet fragile: women and girls there still routinely face discrimination and violence.

While no one doubts the need for peace, Afghan women want to know that they won’t be betrayed, and their rights won’t be undermined, by these negotiations. There won’t be stability if a peace agreement ushers in a new era of injustice and oppression of women. It would be a tragic outcome after nearly 40 years of conflict in the country.

Women, who have the most to lose if the Taliban returns to power, currently have the least say in the process by which it may do so. As negotiations continue, and an Afghan government delegation meets with Taliban members, certain steps are urgently needed.

First, Afghan women must be able to speak for themselves. This means including female negotiators in significant numbers as part of any Afghan government delegation and ensuring formal participation for women’s groups representing civil society. Qatar, as host of the intra-Afghan dialogue, should invite such groups to take part as full delegates. Everyone knows the difference between tokenism and inclusion.

Second, women’s rights and concerns must be on the formal agenda, not relegated to side events or made the lone responsibility of female delegates. Women should have leadership roles during the development and implementation of any agreement and be consulted on all aspects of the future of the country—not just “women’s issues.”

Third, as the U.S. possesses a position of power in the peace process, Afghan women look to us to bring our diplomatic leverage to bear to uphold their rights, alongside their own government. If we don’t, it is almost a foregone conclusion that they will be marginalized. The U.S.—and the other nations that fought beside it in Afghanistan—should be adamant that they will not back any peace deal that erodes rights for women, and will hold all parties to the commitments they make. Afghan women should not be left alone to defend their rights before an organization that has traditionally treated them as inferior beings.

Those who oppose equal rights for women in Afghanistan may claim this agenda is a Western imposition. But women gained the right to vote in Afghanistan in 1919, a year before women in America, and the Afghan constitution of the 1960s guaranteed equality. I have also met many Afghan refugee fathers who braved intimidation and violence to support their daughters’ right to an education.

These peace negotiations are based on the hope that the Taliban has changed and will compromise. Its position on women’s rights and their participation in these talks is a fundamental test of its intentions. Accepting as irreversible the progress made by Afghan women is the standard they should be held to. The war in Afghanistan has been the defining foreign policy issue of our generation. After all the sacrifices made, we must seek to end the conflict on the right terms. We need a peace that is built on human rights in order for it to last. 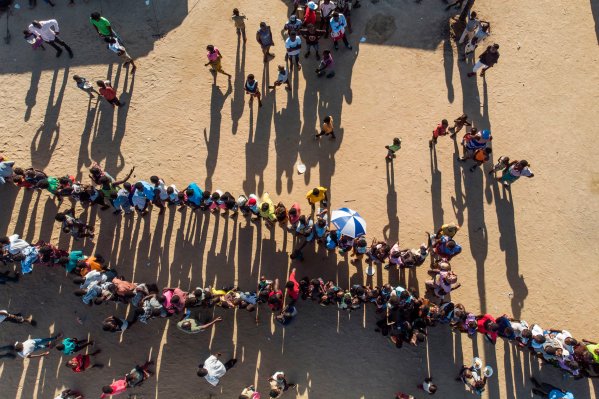 The Story of Migration Is More Positive Than We've Been Led to Believe
Next Up: Editor's Pick