Women in more than 100 countries can buy birth control pills without a prescription. Now, some members of Congress from both parties are arguing that the United States should allow it as well.

Earlier this month, Texas Sen. Ted Cruz became the latest Republican to voice support for making birth control available over the counter, joining a group of Democratic women who have long been working on legislation.

If it moves ahead, the odd-couple coalition could help break a political logjam that doctors’ groups say has made it harder for women to properly use contraception, leading to more unplanned pregnancies and poorer health outcomes.

Dr. Maria Isabel Rodriguez, an assistant professor of obstetrics and gynecology at Oregon Health and Science University who studies contraceptive policy, said over-the-counter birth control is an easy call from a public health perspective. The pill, used by more than nine million women each year, according to the most recent statistics, is considered safer than Tylenol and ibuprofen, not to mention getting pregnant.

“All of the health risks of pregnancy vastly outweigh those of contraceptive use,” she said.

Public opinion polls have found that the large majority of women support making birth control pills available over-the-counter, and the major medical organizations — the American College of Obstetricians and Gynecologists, the American Medical Association and the American Academy of Family Physicians — support making it available.

Democratic Sen. Patty Murray recently put forward a bill, similar to one she introduced in 2015, that would require insurance companies to cover oral contraception without a prescription and say that retailers cannot interfere with consumers’ access to Food and Drug Administration-approved contraception. On the House side, a similar effort is underway from Reps. Ayanna Pressley, Alexandria Ocasio-Cortez, Ami Bera and Katie Hill.

Some Republicans have been warming up to the idea as well. Then-Louisiana Gov. Bobby Jindal endorsed the idea in an op-ed in the Wall Street Journal in 2012, Colorado Sen. Cory Gardner called for it in a campaign ad in 2014 and Donald Trump told Dr. Oz that birth control “should not be a prescription” in 2016.

But obstacles remain on both sides. Republicans generally favor limiting birth control prescriptions to women over the age of 18, while Democrats want to ensure that the change doesn’t lead to higher out-of-pocket costs. Even if those issues can be resolved, it could be years before the FDA approves a specific product for sale.

Rachel VanSickle-Ward, a professor of political studies at Pitzer College who with Kevin Wallsten is working on a book about the politics of the pill, said that a turning point in the debate came with the passage of the Affordable Care Act, which required insurers to cover birth control. That led to a successful Supreme Court fight to allow family-owned businesses to deny birth control coverage to their employees if they objected for religious reasons.

“We saw suddenly conservatives taking the rallying cry of over-the-counter, because they saw it as a clear alternative to expanding coverage through Obamacare,” she said.

“Pharmacy access is amazing because it’s a point of service that’s everywhere,” says Cynthia Harper, a professor of obstetrics, gynecology & reproductive sciences at the University of California San Francisco.

Pharmacists go through a short training that varies by state, according to Sally Rafie, a pharmacist at the University of California, San Diego Health who founded an initiative to educate women and pharmacists about the push to expand birth control access in pharmacies. And while insurance covers the birth control prescribed by pharmacists, it doesn’t always cover the pharmacists’ time.

Some states are working on this, too, but if insurers do not reimburse pharmacists, pharmacies might charge as much as $50 per consultation, Rafie says, which can be another obstacle for women.

This is the kind of barrier that Congressional Democrats want to address with their Affordability Is Access Act. “Women seeking contraceptive care shouldn’t find they have to pay extra, ask permission, or hurdle barriers put up by politicians who think their ideology is more important than a woman’s personal health care decisions,” Murray said when announcing the bill.

Research has shown that many women are not willing to pay more than $10 to $15 per month for over-the-counter birth control pills, so if the cost increases much above that, experts and policymakers say, it would be hard to consider the pill accessible.

Another dispute is over age restrictions. Earlier this year, Gardner and fellow Republican Sen. Joni Ernst introduced a bill that would offer incentives to companies seeking FDA approval but would limit over-the-counter contraception to people ages 18 and older, which medical experts warn could harm teens at high risk for unintended pregnancy.

“Progressives had been somewhat wary of this because they had seen over-the-counter as a Republican way of stalling progress,” says VanSickle-Ward said. But amid a broader debate about reproductive rights spurred by new abortion restrictions, she said over-the-counter birth control could surface as an area of agreement. “Even if Patty Murray’s bill doesn’t go anywhere right now, it can be a talking point, a rallying cry, potentially galvanizing and a new way of framing this issue.” 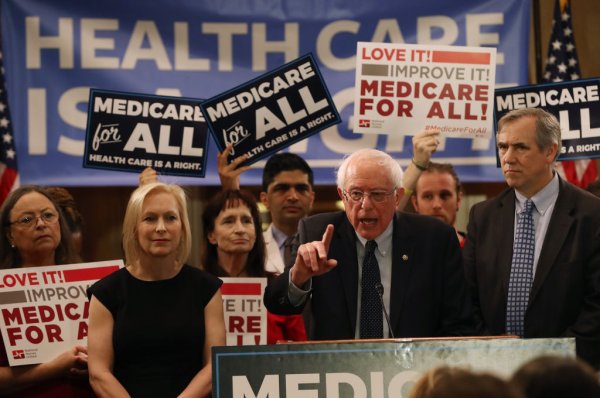 The Surprising Origins of 'Medicare for All'
Next Up: Editor's Pick