On a footbridge leading to the Hong Kong’s Legislative Council building, about three dozen people are intoning “Sing Hallelujah to the Lord,” giving barely a pause after the short, four-line verse ends before starting it again.

Around the corner in Tamar Park, by the Central Government Offices, a group is singing the same hymn — and so is another down the road outside the Chief Executive’s Office.

The song is performed as a round. Its minor-key melody is heard everywhere at the mass demonstrations against Hong Kong’s controversial extradition bill and has become the movement’s anthem.

The reason? Religious gatherings are exempt from the definition of a “gathering” or “assembly” under Hong Kong’s Public Order Ordinance and are thus more difficult to police.

The Christian hymn was written by the Indiana-born Linda Stassen in 1974. According to the Complete Book of Hymns, Stassen was a follower of the Jesus People movement and wrote the song as an assignment for a music composition class, with the words inspired by the early Church. The song has since been included in many Christian hymnals, its popularity stemming from its austere, beautiful simplicity.

Protestors young and old have joined in the singing of the song since taking to the streets on June 9 to oppose the contentious bill.

The proposed legislation would allow China to extradite fugitives from the semi-autonomous enclave for the first time. The bill’s detractors say Beijing will use it to apprehend dissidents and critics of the communist regime, threatening the city’s cherished freedoms.

The demonstrations have brought the busiest parts of the city to a standstill amid scenes reminiscent of the Umbrella Movement of 2014. Hundreds of thousands, if not millions, of people have marched on two consecutive Sundays in a massive repudiation of Beijing. Organizers say that two million people participated in the last march, out of a population of seven million.

The demonstrations have prompted a suspension of the controversial bill and an apology from the city’s top official, Chief Executive Carrie Lam, in the days after. Police have also retracted their earlier characterization of the demonstrations as a riot.

However, until the bill is completely withdrawn, protesters vow to continue their actions—and their intonations of “Sing Hallelujah to the Lord.” Non-Christians have also enthusiastically taken up the hymn.

Sherman Cheng, a 22-year-old protester who works in marketing, says she is not religious. “To me, the song represents Hong Kong people coming together to express the same desires—for our political demands to be met.”

“[The song is] a very good way to express not just an emotion, but our desires in a peaceful, spiritual, religious way,” Catholic priest Cyril Cheung told TIME Monday after leading a round of hymns and bible verses in Tamar Park. He added that the tune spoke to everyone, regardless of their beliefs.

Christians have been at the forefront of the anti-extradition demonstrations. The city’s Catholic diocese has issued a statement urging the government not to rush the bill. Several Christian groups have also voiced concerns about the controversial proposal.

Cardinal Joseph Zen, the Bishop Emeritus of Hong Kong, earlier called for people to come out and join the protests.

“I truly in my heart want all people to fight for our fights in a peaceful way,” Father Cheung said. “It’s our responsibility to stand up and fight for the whole society.” 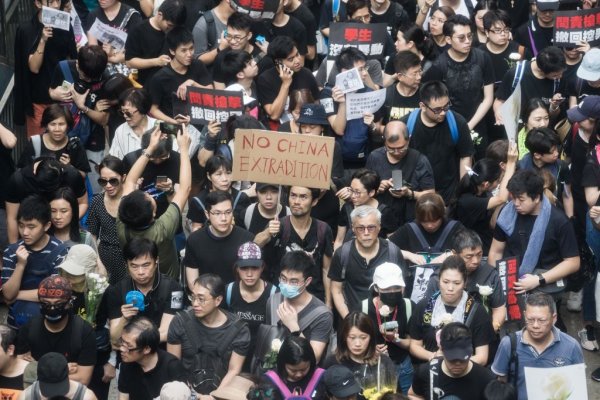 Hong Kong Leader Apologizes Amid Pressure to Resign
Next Up: Editor's Pick