Florida Man or Not Florida Man? Guess Which of These Stories Happened in Florida

The origins of Florida Men date back some 12,000 years, when modern humans first reached the Americas. Agriculture was soon to follow, then the Bronze Age, then written language, then Twitter, and finally, in early 2013, the Twitter account @_FloridaMan.

All the account did, until recently, was tweet the headlines of absurd news stories beginning with the phrase “Florida Man.” The earliest surviving post, in February 2013, is “Florida Man Arrested After Pocket-Dialing 911.” The elegant stunt took off like Burmese pythons in the Everglades. A @_Flor1daWoman emerged from the laboratory a month later. By 2015, Florida Man was one of the most Googled memes of the year, and even made the front page of The New York Times.

The Florida Man meme, which, like all memes, survives its progenitor’s retirement, was quick to turn up a metaphysical quandary: is Florida actually weirder than the rest of America?

To find out, I put together a modest experiment. After searching LexisNexis for every headline that began “[State] Man” or “[State] Woman,” for every state and D.C., I culled the following 20 headlines, 10 of which are from Florida. There are equal numbers of men and women in both groups. Can you tell the difference?

(Note: The blurbs provided after you guess each story are lightly edited so as not to repeat the headline and to withhold the name of the accused.)

Theories abound as to why the Florida Man occupies a benighted place in modern America mythology. Robin R. Vallacher, a longtime Florida resident and social psychologist at Florida Atlantic University, offered several possible explanations, beginning with why we find absurd headlines so alluring in the first place.

“In today’s world, there’s a lack of moral clarity, and this ambiguity regarding good and bad, right and wrong draws people to individuals and events they can easily evaluate,” he said. “So people are drawn to shows like Jerry Springer that feature characters whose behavior is easy to evaluate as undeniably bad, stupid, or bizarre. But that’s a backdrop that applies everywhere. The question is, why is Florida the Jerry Springer of the U.S.?”

One possibility, said Vallacher — who generously studied many “Florida Man” headlines for TIME — is that Florida’s expansive rural population may be more inclined to resolve disputes without the intervention of authorities, a term many psychologists refer to as a “culture of honor.”

“The idea is that, in rural areas especially, people are inclined to take the law into their own hands and deal with grievances not by going to authorities, who may not come to their rescue, but rather by dealing directly with it, often through aggression,” Vallacher said, citing the @FloridaMan tweet about a man who attacked his neighbor with a chainsaw over a dispute over shrubbery.

But the “culture of honor” is not specific to the regions of Florida that still resemble the Old South. What’s unique about Florida, he suggested, was that the proximity of urban and rural areas makes such behavior considerably more noticeable.

“If you leave Fort Lauderdale by airplane, within two or three minutes you’re over the swamps. That contrast between the rural areas and the Gold Coast corridor brings things into focus that might go unnoticed in a state like Alabama,” Vallacher said. “Maybe the frequency of bizarre behavior is not necessarily greater than anywhere, but it’s more readily noticed. It’s the proximity of the ‘old’ and the ‘new.’ The rural regions are only a few miles away from the Ft. Lauderdales and the Miamis.”

Finally, he suggested that we may be witnessing what historians refer to as a “frozen accident,” a term applied to many disciplines in which a random confluence of events has a strong influence on the future. In this case, the frozen accident would be the 2000 presidential election and all the ensuing chaos — at time just when the Internet was turbo-charging the spread of information.

“The 2000 election called attention to just how bizarre Florida was. And this occurred at about the same time that the Internet was beginning to take off,” he said. “So maybe it’s like a ‘frozen accident.’ We happened to be in the right place at the right time, so we established the reference point for craziness.”

Still, the question remains whether Florida is empirically weirder than anywhere else. Two prominent Florida Men insisted so in the 2015 Times story. “There is always an extra twist of weirdness at the end of the Florida story,” said novelist Carl Hiaasen. “It’s the Broadway for idiots,” said humor columnist Dave Barry.

Is it, though? Certainly, in researching this project, I found that strange and confounding behavior is not remotely limited to Florida. A first pass in LexisNexis turned up about 1,500 articles from around the country, which your intrepid correspondent scanned for the most absurd but least gory headlines. The majority were from wire services, which stands to reason: a newspaper in, say, Topeka does not need to specify that a “Kansas man” did something. Locally, that individual is known as a “man.”

Still, the things these eyes have seen. For every eccentric story of palatable innocuity, there were many more reporting grisly homicides, heinous sex crimes and every flavor of fraud. I came away from the experience with a few key takeaways about Americans:

Of course, wire services should not be confused with the Census. They do not represent anything resembling a random sample of humanity, nor should we expect they would. The volume of headlines from any given state is not a useful clue.

As for “Whither Florida Man?,” I’ll report back with the results of this experiment in a few days. I’m curious to see whether Floridians perform any better than they rest of us. Either way, the trope succeeds, I suspect, because it rests at the junction of familiarity and otherness — what social psychologists call “us versus them” or “in-group vs. out-group.” There is no Hungarian Man or Jordanian Woman. The Florida Man could be the “Area Man” so consecrated by The Onion, or live in your city. The question is, is it only funny because he doesn’t? 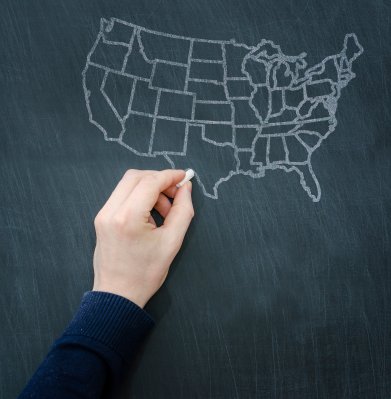 Quiz: Do You Know All 50 U.S. State Capitals?
Next Up: Editor's Pick