Alec Benjamin Is a Pop Storyteller for the Next Generation

Alec Benjamin has worn the same outfit multiple days in a row, he admits when we sit down to chat at New York’s buzzing Soho House one afternoon this spring. The 25-year-old singer-songwriter isn’t overly concerned with fashion; he just likes what he likes, and when he figures out something that works, he sticks with it. “I’m a very OCD person,” he says. “I’ll do one thing to complete exhaustion.”

That’s been true for his music, too. Pop trends come and go, but Benjamin, who’s best known for his viral hit “Let Me Down Slowly”, committed early on to absolute sincerity. In the tradition of pop storytellers like Taylor Swift and thoughtful songwriters like John Mayer, he’s built a brand of contemporary earnestness, layered over bulletproof pop balladry. Here, in this slick environment, a wide-eyed Benjamin seems a little out of place in his low-key sweatshirt, jeans, sneakers and tousled hair; you wouldn’t know he was a platinum-selling artist. But as the DJ in the corner ups the volume of his jazzy set, Benjamin settles in for the conversation, and any self-consciousness fades away. He’s not the type of guy who worries about keeping up appearances.

Benjamin, who grew up mostly in Phoenix, Arizona across the street from his grandparents, wasn’t an overnight success. He started out as a musician almost as a fluke: at a summer camp talent show as a kid, he volunteered to sing. The feedback? “That’s not bad,” he remembers. From there, he taught himself to play guitar, not wanting to waste time learning more formally before playing the music he liked — and partially to impress a girl in high school, he admits. “I ended up really liking music in the process,” he says. (This is an understatement.)

After getting signed in his teens to a record label, his nascent career sputtered out before it had a chance to take off. So he put on a series of what he calls the “parking lot shows,” playing mini-sets outside the concerts of headliners like Shawn Mendes and Troye Sivan. Not a lot of teens would be unselfconscious enough to do something like that, but Benjamin wasn’t embarrassed. He’s sincere, which comes across in his clear-eyed storytelling and lack of artifice; he isn’t larger than life, just a kid from down the block who’s handy with a guitar and a pen.

Like with Swift’s revelatory early work, Benjamin has the uncanny ability to turn complex, highly personal turning points into verses that are at turns sweet and cutting. He’s done it so far without contrivance; there are no “eras” or personas to his career. In person, Benjamin scatters his sentences with “likes” and thoughtful pauses, chasing a thought in one direction and then reversing course, checking to see if you followed him. Onstage and on social media, he’s similarly open, which has naturally endeared him to fans. “Authenticity” is valuable, and Benjamin has it in spades.

His first original song, he says, was titled “Beautiful Pain,” a tribute to his grandpa after his death. That kind of emotional specificity—an intense moment transformed into a song—has become a hallmark of Benjamin’s work ever since. He calls himself a “narrator,” and that’s apt; every song is a story, in the tradition of Paul Simon and Leonard Cohen, or more recently, Brandi Carlile or even Ed Sheeran. “It’s better to show than to tell,” he says, making all English teachers proud. “You can say I have a broken heart,” or you can do as he does in the song “Water Fountain,” a delicate but visceral piece of songwriting about an early crush and the youthful mistakes that led them their separate ways. Not everyone has had a water fountain crush in exactly the same way as Benjamin, but pretty much everyone can relate to the longing he evokes, particularly in his voice—an androgynous, keening tenor that sounds both clear and innocent, like it’s always just on the edge of breaking.

Other songs, like “Death of a Hero,” interrogate how our idealism gets stripped away from us as we grow up. “Let Me Down Slowly,” his platinum hit, is a raw and honest ballad with pop edges, asking for simple kindness towards a tender heart. And the new release, “Must Have Been the Wind,” is one of his sweetest yet. “I heard the voice of a girl / And it sounded like she’d been cryin’ / Now I’m too worried to be sleepin’,” he sings, telling a story of checking in on a stranger. “You’re always welcome to come in,” he continues: “You could stay here for an hour or two, if you ever need a friend.” It sounds like he means it.

In a culture filled with celebrities known for confident posturing, this sensitivity can come as a shock to the system. His contemporaries—like too-cool-for-school teen wunderkind Billie Eilish, next-gen rockstar Mendes, conscientious icon Sivan or rising queer star King Princess—telegraph as polished and comfortable in the spotlight. But Benjamin, ever-unassuming, stands out on the basis of his detailed stories and the desire for connection he writes about. “That’s why I make music—that’s why I sing songs,” he says. “I’m like the next generation of John Mayers,” he says. Then he clarifies, conscious of coming across as too bold: “That’s not me saying that. He told me I could say that!”

He can back it up: After releasing his Narrated For You EP in late 2018 and headlining his own US tour, he’s reaping the rewards. “Let Me Down Slowly” went platinum, he’s played on late-night shows like The Late Late Show With James Corden, and he’s in a regular text chat with Mayer, one of his early idols, after Mayer discovered him through a radio DJ. “Must Have Been the Wind,” meanwhile, debuted on Spotify’s New Music Friday playlist just short of the top spot—best only by Taylor Swift. He’s coming face-to-face with real fame, and soon.

But his signature sentimentality—that underdog, looking-from-the-outside-in character that makes him relatable to so many—isn’t about to change. “Everybody tells you, when you get to high school, people won’t make fun of you,” he says. “Come on! High school is the same as middle school, and it sucks. Then you get to college—everyone’s like, ‘There’s no popular kids in college.’ But that’s not true.” Real life, he has discovered, is similar. “The lunch table just gets bigger, everywhere you go. Life hasn’t changed,” he says. “Where do I sit?” 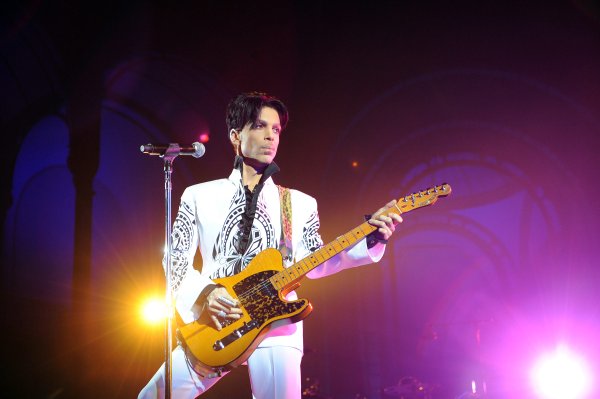 Prince Wrote These Songs for Other Stars. Now Listen to Him Sing Them
Next Up: Editor's Pick