5 Songs You Need to Listen to This Weekend

This week, the music gods are blessing us with an overload of new, fresh pop from a range of genre favorites. From the return of Katy Perry and Miley Cyrus to new offerings from the likes of Camila Cabello, Rosalía, King Princess, Kim Petras, MIKA and Tove Lo, there’s more than enough to satisfy pop fans. In particular, it’s worth paying attention Perry’s latest, “Never Really Over,” marking the vivacious pop star’s next step. Then there’s Swedish singer Tove Lo, whose new song shows a new, softer side from the party-anthem queen. King Princess doubles down on her simmering vibe on “Cheap Queen,” and European star MIKA makes a splash with the summer bop “Ice Cream.” And there’s another, non-pop new release to get excited about, too: Carrie Brownstein’s band Sleater-Kinney, coming in strong with “Hurry on Home,” their first new music since 2015.

Swedish pop artist Tove Lo made a name for herself with hard-partying anthems like 2014’s “Habits (Stay High)” and “Talking Body;” her last hit, off 2017 album Blue Lips, was unabashedly called “Disco T-ts.” So “Glad He’s Gone,” the first release from her upcoming album, may come as a surprise to longtime listeners. It’s a tender love song to a dear friend, a supportive shoulder in music form. Over a delicate guitar-plucked beat, Tove Lo outlines a friend’s problematic relationship. “Did you give in to his ego, just to give a little confidence?” she probes. “I think you know it’s time to let go.” Her trademark has always been raw honesty about the harder edges of young adulthood, from wild nights to sexual liberation. Now, she’s using that honesty in a sweeter, more compassionate direction. It’s a treat.

The verdict’s in: it’s a bop. Katy Perry has been mostly MIA from pop’s biggest stages over the past year, taking a beat to recalibrate following the underwhelming reception to her 2017 album Witness. In the interim, she’s gotten engaged to Orlando Bloom and appeared as a judge on the American Idol revival. “Never Really Over” is a delightfully bright, unapologetic return to her pure pop form. Perry has always been at her best when she leans into the stadium-worthy melodrama of her live act; this one swings between earnest, sweeping chorus and a stuttering, disco-inspired transition that gives it a dance edge. Perry’s other strength is her lyrical relatability: nothing is really ever over, a truth she happily spells out for us all.

England-based singer-songwriter-producer MIKA made his debut splash back in 2007 with frothy, bubblegum pop hits like “Grace Kelly” and “Lollipop,” paired on his albums with other tracks that showed off his orchestral arrangements; he’s always been an artist with range. Now, ahead of his upcoming fifth album, the multi-talented artist is back with “Ice Cream,” a sugar-sweet, carefree and upbeat summer bop that’s about, well, the joys of the warmer months. His hyper-specific lyrics complete the picture: “The smell of colored plastic baking in the sun… I want your ice cream, I want it melting on my tongue.” It’s hard not to want to find a pool (and a nice cold treat) after listening to the funk-infused track.

The way King Princess sings sounds deeply intimate, like she’s delivering her lyrics up close in your ear. The Brooklyn-bred indie pop singer-producer first made waves last year with her debut single “1950,” a simmering and lovely track with retro vibes. “Cheap Queen,” off her upcoming debut album, doubles down on that aesthetic. She mixes lo-fi production and a staticky backbeat with that distinctive voice, which mixes yearning and a kind of drowsy self-assuredness. “I can be what you like,” she insists; “Cheap Queen” confirms it.

“Disconnect me from my bones so I can float, so I can roam,” Carrie Brownstein insists on “Hurry On Home,” the new single from the beloved indie rock band and their first new release since 2015. She draws a stark and fed-up picture of a frustrated self, beholden to physical needs — and dependent on the love of a certain someone else. “You got me used to loving you,” she complains. There’s bitterness and desire all wrapped up in the song, which meshes intense guitar riffs with Brownstein’s equally intense lyrics; the track was also produced by St. Vincent’s Annie Clark. It’s a song to get listeners riled up — with desperation and a little bit of self-loathing, but also with a catharsis in its universal pain. 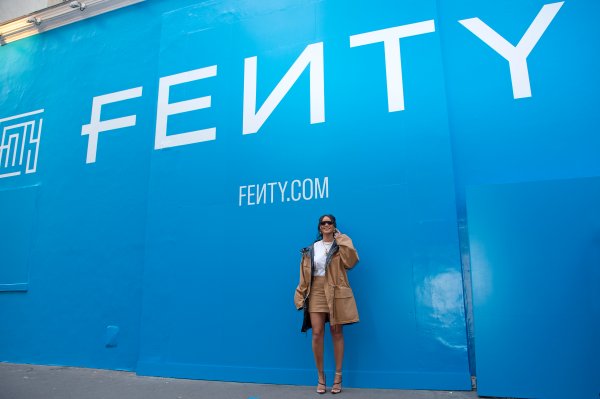 'Ooh na na, What's Her Name?' Has the Public Been Mispronouncing Rihanna's Name This Whole Time?
Next Up: Editor's Pick