Toni Morrison Was Described as a ‘Seer’ and ‘Truth-Teller.’ Here Are Some of Her Wisest Words From the Pages of TIME

Toni Morrison, the author of books including Beloved and Song of Solomon and the first African-American woman to win the Nobel Prize, died on Monday night at the age of 88.

Morrison was best known for chronicling the black American experience, while also making history as an editor and teacher: She won the Pulitzer Prize in Fiction in 1988; she was the first female African-American editor in Random House’s history; she taught creative writing and literature at colleges and universities nationwide. And beyond those accolades, those who loved her and her work saw something harder to describe, a wisdom that made people across the world look to her for help understanding the world.

As Oprah Winfrey put it at the Center for Fiction’s 2018 gala, “She is our conscience, she is our seer, she is our truth-teller.”

Morrison was interviewed by TIME on multiple occasions over the years, including for a 1998 cover story at the time of the publication of her novel Paradise. As the world remembers the groundbreaking author, here are some of her most inspiring words of wisdom that appeared in the pages of TIME:

On the importance of humor

Before her fame arrived, Morrison had been through a lot. She came from a family of sharecroppers, and her parents moved north to the steel mill town of Lorain, Ohio. She was told that once, when they were short on their $4 monthly rent, the landlord tried to torch the house with the family inside. She raised two sons as a single mom. And she dealt with the racism and social pressures facing a black woman in America. Looking back over her years, after winning the Nobel Prize, Morrison noted that humor was key:

“Being able to laugh got me through… I was the one with the anonymous birth order. There was my older sister, firstborn; me, void; my younger brother, first son; and another son, the family baby. Feeling left out, and trying to attract attention, I became the noisiest of them all.”

Morrison’s novel Paradise is about a white woman who is fatally shot in a predominantly black town, but the subject of race is barely mentioned directly and the race of the characters is not clear. Morrison explained that there was a larger reason why she wrote about it that way:

“I wanted the readers to wonder about the race of those girls until those readers understood that their race didn’t matter. I want to dissuade people from reading literature in that way. Race is the least reliable information you can have about someone. It’s real information, but it tells you next to nothing.”

About a year after her 1987 novel Beloved won the Pulitzer Prize in Fiction, she gave a wide-ranging interview about the racial disparities in society, and responded to a question about the growing number of black teen moms and single-parent households:

“I don’t think a female running a house is a problem, a broken family. It’s perceived as one because of the notion that a head is a man. Two parents can’t raise a child any more than one. You need a whole community — everybody — to raise a child. The notion that the head is the one who brings in the most money is a patriarchal notion, that a woman — and I have raised two children, alone — is somehow lesser than a male head. Or that I am incomplete without the male. This is not true. And the little nuclear family is a paradigm that just doesn’t work. It doesn’t work for white people or for black people. Why we are hanging onto it, I don’t know. It isolates people into little units — people need a larger unit.”

In 2004, she talked about how the greatest gift we can give our mothers is leading the kind of life they wished they could live. Her mother, who had wanted to be a singer, had encouraged her to go to college; Morrison majored in English at Howard University and got a graduate degree in it at Cornell University in 1955:

“Of all the gifts my mother gave me, the best one was letting me have the life she had wanted for herself. That life, I learned as a teenager, could involve marriage, but something else was to come first. It was college, followed by a ‘good job.’ …In the way we can — sometimes unexpectedly — return favors to those we care about, I gave back to my mother some of what she had so lovingly and freely given me. Through her, my world opened up with a vividness I couldn’t have imagined as a 15-year-old in Lorain. And through me, I’m gratified to say, my mother finally had the public life she’d always wanted.”

On winning the Nobel Prize

Paradise, the book that earned her that spot on the cover of TIME, was the first book she’d published since she became the first African American woman to win the Nobel Prize in Literature in 1993. It was the third novel in a trilogy, after Jazz and Beloved. At the time, she talked about shrugging off the critics who claimed she won because of what she represented, as opposed to the quality of her writing:

“When I heard I’d won, you heard no ‘Aw, shucks’ from me. The prize didn’t change my inner assessment of what I’m capable of doing, but I welcomed it as a public, representational affirmation of my work. I was surprised at how patriotic I felt, being the first native-born American winner since Steinbeck in 1962… I felt pride that a black and a woman had been recognized in such an international forum.”

And, on the subject of prep for the ceremony, her wisdom extended to the practical: 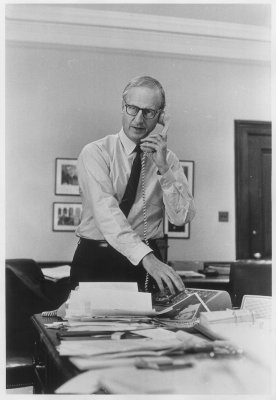 When 'the Boss' Was My Boss: What I Learned Working for Legendary Prosecutor Robert M. Morgenthau
Next Up: Editor's Pick