President Trump Said He Would Take Foreign Campaign Help. Here's What Past Candidates Did in That Situation

Soviet Ambassador Anatoly Dobrynin, speaking during the signing of the nuclear nonproliferation treaty in the White House, in 1968.
Bettmann/Getty Images
By Lily Rothman

This week, President Donald Trump once again found himself defending his stance on accepting campaign help from a foreign government. The latest round of debate on the issue began Wednesday, when Trump said in an interview with George Stephanopoulos that he thinks there’s “nothing wrong with listening” if someone from a foreign country offers a campaign information about an opponent, and that he thought he would take the information if he found himself in such a situation.

Facing a backlash from opponents and fellow Republicans alike, Trump later sought to clarify those remarks, saying on Twitter on Thursday that he talks to representatives of foreign governments all the time and can’t be expected to report everything they say to the FBI, adding on Friday morning saying in an interview that he would “absolutely” tell law enforcement about such an offer.

But this is not the first time the topic has come up: In 2017, after it came out that his son Donald Trump Jr. had taken a meeting with a Russian lawyer offering information about Hillary Clinton during the 2016 campaign, the president said that he believed “many people would have held that meeting”; last year, he tweeted that such a meeting would be “totally legal and done all the time.”

The President is right that he’s not the first American politician to find himself in a situation where a foreign government is offering campaign help. One thing that sets this situation apart, argues presidential scholar Ken Hughes, who spoke to TIME as part of a presidential history partnership with the Miller Center at the University of Virginia, is the openness with which Trump discusses the subject.

One particularly informative example of this history, Hughes says, is what happened in the lead-up to the 1968 presidential election.

That year’s was a particularly fraught race, as incumbent President Lyndon Johnson announced relatively late in the game that he would not seek another term and popular challenger Robert F. Kennedy was shot and killed during the primaries. Meanwhile, between the Vietnam War, the Cold War and domestic upheaval in America’s cities, the stakes were higher than ever.

“When I look at 1968 the biggest theme that emerges is that people were losing their bearings,” Hughes, author of Chasing Shadows: The Nixon Tapes, the Chennault Affair, and the Origins of Watergate, says. “Things that they had assumed were constant were threatened.”

One way in which that new world was expressed was in foreign involvement in the results of the presidential election.

On the Democratic side, eventual nominee and sitting Vice President Hubert Humphrey was offered help from the Soviets and refused it.

This fact was revealed decades later in Soviet ambassador Anatoly Dobrynin’s memoir, In Confidence, in which he spilled the beans on a long-secret meeting he’d had with Hubert Humphrey in the late summer of 1968. Humphrey had earlier in the year asked Dobrynin to let Moscow know that he was considering a run, Dobrynin wrote, and the Soviet leadership responded with well wishes. At the time, “Moscow believed that as far as its relations with Washington were concerned, Humphrey would make the best president at that time,” Dobrynin recalled.

After Johnson’s decision not to seek reelection and Robert F. Kennedy’s death at an assassin’s bullet, Humphrey secured the nomination, but little support from Johnson, who had promised to stay neutral as part of his decision to leave the ring. In addition, the situation in Vietnam meant that Johnson and Humphrey were often at odds. Meanwhile, on the Republican side, the convention season left Richard Nixon with his party’s mantle. The prospect of a President Nixon left Moscow worried that the consummate conservative would make the Cold War situation even worse. So, Dobrynin recalled, his bosses ordered him — despite Dobrynin’s protestations that it was a bad idea — to offer Humphrey any help he wanted from Moscow, including funds.

“The Russians were very worried about Richard Nixon in 1968 based on his reputation as a hard-line anti-communist,” Hughes says. “They didn’t know he’d become the President of détente.”

Shortly, the chance appeared, during a breakfast between the Soviet ambassador and the Vice President, during which Dobrynin sprang the idea on Humphrey. “Naturally, we talked about the election campaign, so I tried to take advantage of that to carry out my instructions as tactfully as possible,” Dobrynin wrote. “I asked him how his campaign was going, and then I moved the conversation diplomatically to the state of his campaign finances. Humphrey, I must say, was not only a very intelligent but also a very clever man. He knew at once what was going on. He told me it was more than enough for him to have Moscow’s good wishes which he highly appreciated. The matter was thus settled to our mutual relief never to be discussed again.”

Nothing came of the abortive offer, which would have been what Hughes calls a “colossal scandal,” and it stayed a secret for decades.

“I know Humphrey is not the only person in public life who would refuse foreign help in an American election on the principle that American elections should be decided by Americans,” Hughes says. “To me, it’s very suspicious when people say, well, anyone would do it. It’s clear from history that not everyone would.”

On the Nixon side of things, the situation was a bit different.

“After Johnson had announced that he would not seek re-election in 1968, he learned from an intelligence report that Anna Chennault, widow of famed World War II Flying Tiger General Claire Chennault and a money raiser for the 1968 Nixon campaign, had got in touch with the Saigon government,” TIME later explained. “It was suspected, at the least, that she was urging them not to cooperate with Johnson in his last days, but wait for Nixon to be elected.” It turned out that Richard Nixon’s campaign was involved, working behind the scenes to undermine then-ongoing Vietnam peace talks.

“Several times in public [Nixon] said that he was in favor of the start of peace talks and would do nothing to interfere with their start,” Hughes says. “He was putting his political interests over the interests of peace and the lives of American soldiers.”

While it’s impossible to say exactly what determined the election results, the failure of those peace talks is thought to have quite possibly contributed in a significant way to the Democrats’ loss at the polls that November. (The campaign’s actions also, Hughes notes, would have likely been a violation of the Logan Act.)

It’s important to remember, Hughes says, that while Humphrey had no idea he was about to get an offer of Russian help (and rejected it immediately) and Nixon actively sought foreign help, both kept it secret. This fact, to Hughes, reveals an important distinction between 1968 and today: back then, the actions of both men indicated that they believed the American people would be scandalized to learn about even the possibility of Russian or South Vietnamese interference in an election campaign. Trump’s candor on his approach to the matter (coupled with the fact that in 2016 he appeared to publicly entreat Russia to look into Hillary Clinton’s emails) indicates the President does not think American voters would respond negatively to such interference. Not only does he now say he would he tell the FBI if he received such an offer, but he’s also telling the public in advance that he would at least be open to listening.

Foreign interference in elections is something that the country has worried about from the beginning, but perhaps by now it no longer shocks the way it would have in 1968. 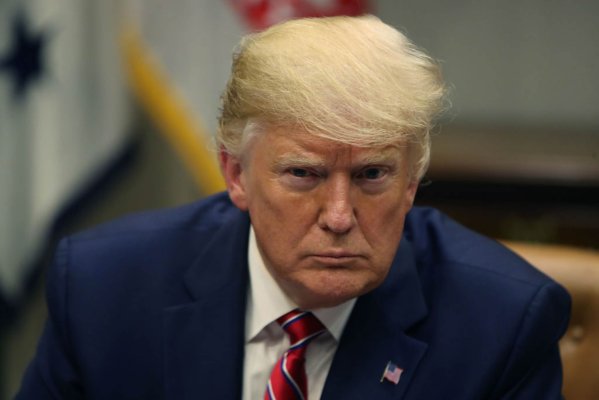 President Trump Invoked Executive Privilege. Here's the History of That Presidential Power
Next Up: Editor's Pick