With GoFundMe Money, They Built a Border Wall in New Mexico. U.S. Officials Say It's Causing Them Problems

Construction crews work on a border wall being put in place by We Build The Wall Inc. on June 1, 2019 in Sunland Park, New Mexico.
Joe Raedle/Getty Images
By Katie Reilly

Construction of a wall on the southern border that was privately funded by a viral $23 million GoFundMe campaign hit another roadblock this week, when a U.S. agency ordered that a gate in the steel fencing be kept open during the day because it blocks access to a U.S.-owned levee road, dam and a historic monument.

The gate was built by We Build the Wall in Sunland Park, N.M., near El Paso, Texas “without authority,” the United States Section of the International Boundary and Water Commission (USIBWC) said Tuesday.

Most of the crowdfunded wall is situated on private property owned by a brick company. But when a sliding gate attached to the wall is closed, it crosses into federal land and blocks off a federally owned road, Lori Kuczmanski, a USIBWC spokesperson, tells TIME. “We have operational needs that we need to maintain, and with it being closed, and them not giving us access, we’re locked out of our own property,” Kuczmanski says. “That’s the whole situation here.”

We Build the Wall locked the private gate on June 6. After USIBWC made “repeated requests” to unlock and open the gate, law enforcement officers removed the lock and opened the gate to allow for dam maintenance. The agency is now requiring that the gate be kept open during business hours and locked at night “due to security concerns.” Meanwhile, We Build the Wall has accused the agency of “overreach.”

“The USIBWC is concerned about the safety and security of our employees and the infrastructure at the American Dam, which is next to the privately-constructed gate,” the agency said in a press release Tuesday, explaining why the gate would be kept open. “Despite USIBWC requests to locate the gate further from American Dam, the private gate was constructed in a way that may channel undocumented immigrants into the American Dam area.”

When the We Build the Wall GoFundMe page launched in December, it raised $20 million in less than a month with the goal of paying for a wall on the U.S.-Mexico border that was a central promise of President Donald Trump’s presidential campaign. While Trump declared a national emergency this year to authorize about $8 billion in spending on the border wall, there is an ongoing legal battle over the use of defense funding for the wall.

Construction on the private wall in Sunland Park began on Memorial Day this year, but it was temporarily halted by a cease-and-desist order from city officials, who said We Build the Wall lacked the necessary permits and was in violation of city ordinances. City and state leaders criticized the wall as unnecessary and ineffective, but the mayor later allowed construction to continue.

Kuczmanski says USIBWC is still waiting for We Build the Wall to fully file a permit request related to its use of federal land — a different permit than those required by the city.

We Build the Wall has estimated that the Sunland Park portion of the wall — which, at about a half-mile long, is a small fraction of the roughly 1,950-mile-long southern border — will cost $6 to $8 million. The organization said it is planning to continue building walls in other locations on the border, but has yet to announce where those walls are located.

Brian Kolfage, who founded We Build the Wall and started the GoFundMe campaign, has faced criticism throughout the crowdfunding process — for initially lacking a plan to build the wall, and later for prompting concern from donors about how their money would be spent. He has touted the construction in Sunland Park as evidence that the fundraiser has worked.

“Our border wall & gate are secure again and we still have not had a single breach,” Kolfage tweeted on Tuesday. “I want to thank the IBWC for acting swiftly and we look forward to working with you on our future projects!” 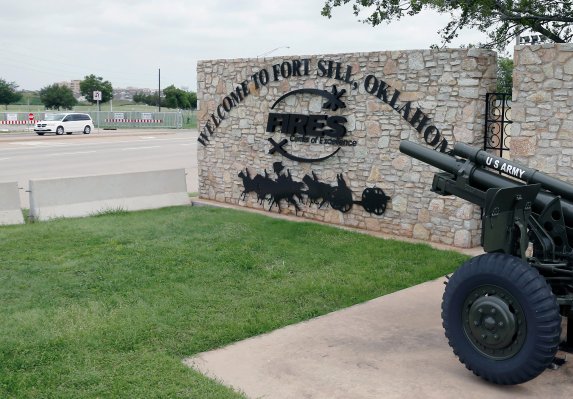 Trump Administration to Hold Migrant Children at Fort Sill
Next Up: Editor's Pick