GoFundMe will refund over $20 million in donations raised to build a U.S.-Mexico border wall.

While the original goal was to give all money raised to the government, on Friday, Kolfage updated donors that the campaign would instead move to a newly-founded nonprofit. This shift meant all GoFundMe donations to the campaign would have to be refunded.

In a message on the campaign’s page, Kolfage explained his motivation for the fundraiser and laid out the new direction.

“Eight days before Christmas I started this GoFundMe campaign because I was tired of watching the U.S. government’s inability to secure our southern border,” he posted. “Like most Americans, I see the porous southern border as a national security threat and I refuse to allow our broken political system to leave my family and my country vulnerable to attack.”

He said that he spoke to leading political and security specialists who came to the conclusion that the federal government would not be able to accept their donations “anytime soon.” Because of this, Kolfage created a nonprofit called “We Build the Wall, Inc.” and said he believes his team is better equipped than the government to use donated funds to build an actual wall on the southern border. He asked donors to redirect their GoFundMe contributions to the new nonprofit.

“Our highly experienced team is highly confident that we can complete significant segments of the wall in less time, and for far less money, than the federal government, while meeting or exceeding all required regulatory, engineering and environmental specifications,” he posted. “Our team strongly believes that we can complete our segments of the wall for less than half of the government’s estimated costs on a per mile basis.”

According to GoFundMe spokesman Bobby Whithorne, the campaign was not able to deliver on its initial promise, which prompted the mass refund.

At the end of his statement, Kolfage acknowledge the refund.

“When I created this fundraiser, I said if we did not reach our goal we will refund donors,” he wrote. “I am honoring that commitment today. We will promptly refund your donation unless you tell us you approve our new plan for action.”

Whithorne said all donors will be contacted by GoFundMe via email.

Kolfage is an Air Force veteran who lost both legs and his right arm in a rocket attack during his second tour in Iraq in 2004. Sheriff David Clarke, former Kansas Secretary of State Kris Kobach and Fox News contributor Sara A. Carte are also listed as being on the We Build the Wall, Inc. board, according to the nonprofit’s website. 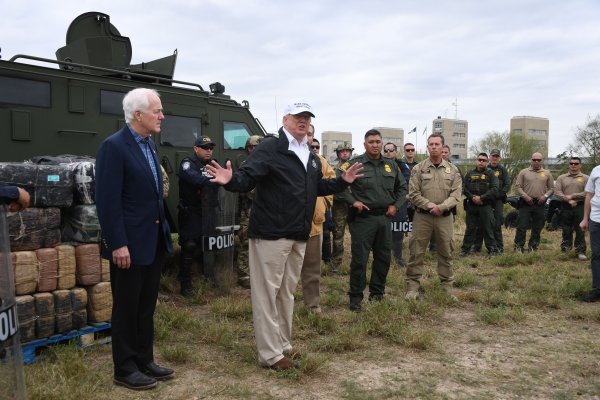 The Real Border Crisis
Next Up: Editor's Pick