When it comes to E3, the video game conference where companies like Microsoft, Nintendo, Bethesda, and Ubisoft, unveil their upcoming titles, game makers like to make a splash. In the past, that has meant Steven Spielberg and James Cameron introducing the Avatar game, Robin Williams demoing the game Spore, and Drake to introduce FIFA 14. This year, the biggest buzz wasn’t generated by a celebrity (although Keanu Reeves did make an appearance), but by a celebrity’s dog.

Jon Bernthal, best known of his roles in The Punisher and The Walking Dead is starring in Ubisoft’s upcoming game, Ghost Recon: Breakpoint. To introduce the world to his character, Cole D. Walker, which Variety describes as “a man who runs by his own moral code”, Bernthal appeared on stage. “What’s going on, everybody?” Bernthal said. “Hey, I’m Jon. This is Bam Bam the dog.“ The dog quickly settled on the stage and then proceeded to immediately upstage Bernthal by just sitting there sweetly and just generally being a very good boy.

Bam Bam, a blue pit bull who has his own Instagram feed, is one of Bernthal’s three rescue pups who make frequent appearances on Bernthal’s own Instagram feed. Bam Bam joined the family in 2017 (here’s a puppy pic, for no good reason other than adorableness) and has been at Bernthal’s side ever since, even in Esquire cover shoots and on stage at E3.

Based on the fan’s reaction to Bam Bam, hopefully next year every E3 celebrity will bring their dog. Or the celebrities can stay at home and dogs can run the video game press conference on their own. 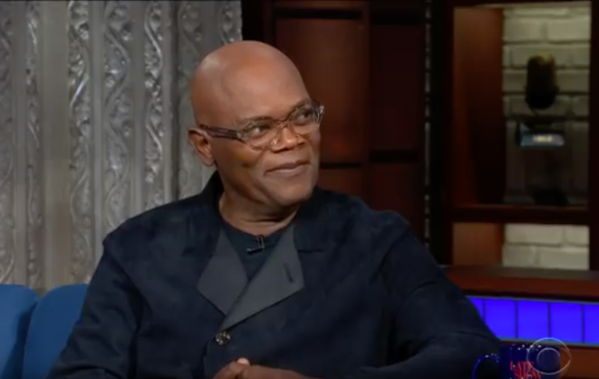 'I Hope I Was Trying to Be Funny.' Samuel L. Jackson Really Didn't Want His 2016 Trump Prediction to Come True
Next Up: Editor's Pick