John Oliver knows that this year has been rough for women, who “judging from restroom signs are just men who have swallowed a trapezoid.” To cheer women up, after the confirmation of a “Supreme Court justice with resting beer face” and “the election of a president who thinks of their genitals as handles”, Oliver has an idea—finally ratify the Equal Rights Amendment.

Tuesday marked the 100th anniversary of the 19th amendment that guaranteed the right to vote, a right that according to Oliver, women should have had “for a lot longer than Kirk Douglas has been breathing.” While voting is an important right, so is equality under the law. However, gender equality is not guaranteed by the U.S. Constitution and it won’t be unless the Equal Rights Amendment passes. The so-called ERA is just 24 words long, and according to Oliver, 80% of us think it’s already in the Constitution. “It’s one of those things that’s so obvious that you think you already have it,” he said, comparing its protections to the box of baking soda you see in the grocery store and think you definitely have at home only to get home, reach for the baking soda, and realize “f—, women still aren’t guaranteed equal rights under the Constitution.”

While there are laws and policies guaranteeing equal rights for women, Oliver points out that policy guidelines and laws can change depending on who is in charge. That is happening now, with the Senate allowing the Violence Against Women Act to expire and doing away with Obama-era guidelines protecting against discrimination based on gender. “Constitutional amendments are safe from Donald Trump, unlike Melania’s hopes and dreams and any American flag he gets close to,” said Oliver.

The ERA passed the Senate and then the House of Representatives, and then in 1972, the proposed 27th Amendment to the Constitution was sent to the states for ratification. Thirty-seven states have ratified it so far, meaning just one more is needed to make the ERA law. However, momentum for ratification came to a halt, thanks in part to Phyllis Schlafly, described by Oliver as a “pre-internet internet troll.” Due to her efforts and vitriolic debate, the deadline for ratification came and went.

That doesn’t mean that the ERA is dead on arrival though. According to Oliver, legal scholars believe that Congress can simply change the deadline again or do away with the deadline entirely and allow the ERA to be ratified. To that point, Nevada and Illinois have ratified the ERA in the last few years and now just one more state is needed to make the ERA law. There are 13 states that Oliver points out could genuinely make history by making the ERA the law of the land. “None of this is that complicated,” said Oliver. “Equality for women should be a basic principle for our society. If you think it already is, great, all the more reason to write it down. And if you think it isn’t, then we badly need the ERA.”

To do that Oliver beseeched the states to take a stand and ratify the ERA. The states that could make history, include Arizona, Georgia, Oklahoma, either Carolina, Utah, Florida, Mississippi, Louisiana, Arkansas, Alabama (“It definitely won’t be you,” said Oliver) or Virginia (“You’re the birthplace of Chris Brown, Rick Santorum and Pat Robertson, so frankly you owe America this.”)

Oliver just had one request: “Somebody please do it before Florida, because I do not want to give them credit for this.” 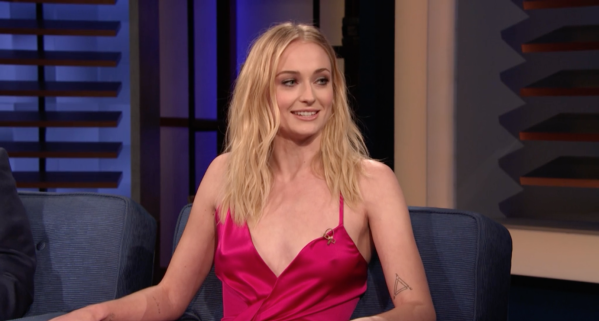 Sophie Turner Knows You Want Her to Live Happily Ever After With Maisie Williams. Here's How She Played Along.
Next Up: Editor's Pick