The 7 Most Memorable Moments From 2020 Democratic Town Halls

The historically large field of Democratic presidential candidates has spurred a boomlet in hourlong cable TV specials, getting attention for their campaigns in televised town halls.

The three major cable news networks — CNN, Fox News and MSNBC — have hosted one-on-one town halls with everyone from Sens. Bernie Sanders, Elizabeth Warren and Kamala Harris to those further down in the polls such as Rep. Seth Moulton and former Colorado Gov. John Hickenlooper. Even some who aren’t running — like former FBI Director James Comey — have gotten a town hall.

At times, the town halls have made news for not happening, as when Warren declined an invitation from Fox News, calling it a “hate-for-profit racket that gives a megaphone to racists and conspiracists.”

An hourlong Q&A on cable news is good for any campaign’s publicity, but the real key to doing well is for candidates to create a moment that goes viral on social media, leading to more news coverage and more free publicity.

Sometimes those moments come from the moderator or the crowd, and they aren’t all positive — one reason that frontrunner Joe Biden may have avoided holding one so far.

Here’s a look at seven of the most memorable moments from the 2020 cable news town halls.

South Bend, Ind., Mayor Pete Buttigieg catapulted himself from relative obscurity toward the top tier of Democratic contenders with a strong performance at a SXSW town hall.

Buttigieg, an Episcopalian who frequently talks about his Christian faith, gained particular attention for a question about whether Vice President Mike Pence, who is also from Indiana, would be a better president than Donald Trump.

California Sen. Kamala Harris had the wrong kind of viral moment during a town hall when she said she would eliminate private insurance, a position her campaign then walked back. It then walked back the walkback as well.

During a CNN town hall in January, host Jake Tapper noted that a Medicare for All proposal she supports “will totally eliminate private insurance.” He asked if people who have private insurance now would get to keep it.

“Well listen, the idea is that everyone gets access to medical care,” she said. “And you don’t have to go through the process of going through an insurance company, having them give you approval, going through the paperwork, all of the delay that may require — who of us has not had that situation, where you gotta wait for approval, and the doctor says, ‘Well, I don’t know if your insurance company is gonna cover this’? Let’s eliminate all of that, let’s move on.”

A researcher for the Republican National Committee was quick to attack, posting the clip on Twitter.

An unnamed adviser told CNN that Harris was actually open to supporting more moderate proposals that would not eliminate private insurance. Then a Harris spokesman said that her openness to other plans shouldn’t cast doubt on her support for Medicare for All.

“Medicare for All is the plan that she believes will solve the problem and get all Americans covered. Period,” spokesman Ian Sams told CNN. “She has co-sponsored other pieces of legislation that she sees as a path to getting us there, but this is the plan she is running on.”

Sometimes the moderator makes news too. During a Fox News town hall with Vermont Sen. Bernie Sanders in April, host Bret Baier sought to dramatize concerns about his Medicare for All proposal.

First, Baier asked audience members to raise their hands if they currently rely on private health insurance. Then he asked a follow-up: “Now, of those, how many are willing to transition to what the senator says, a government-run system?”

U.S. Senator Kirsten Gillibrand speaks to guests during a campaign stop at the Chrome Horse Saloon on February 18, 2019 in Cedar Rapids, Iowa. Gillibrand, who is seeking the 2020 Democratic nomination for president, made campaign stops in Cedar Rapids and Iowa City.
Scott Olson—Getty Images

Another memorable moment for a moderator also came from Fox News. During a town hall in June with moderator Chris Wallace, New York Sen. Kirsten Gillibrand pushed back against the tone of the network’s coverage of abortion:

“I think that the evidence needs to be gathered,” Gabbard replied. “And as I have said before, if there is evidence that he has committed war crimes, he should be prosecuted as such.”

“Everything that I have said requires that we take action based on evidence,” she responded. “If the evidence is there, there should be accountability.”

The answer sparked a strong reaction from Assad’s critics.

Massachusetts Rep. Seth Moulton used a town hall in June to open up about a deeply personal experience as a veteran.

Just hours after revealing on CNN’s State of the Union that he has post-traumatic stress, the Iraq War veteran, Marine captain and Bronze Star recipient told the audience at a June town hall: “Frankly, I did not have the courage to share this before. I was afraid of the political liability, even the personal liability. My own family didn’t know I was going to a therapist for post-traumatic stress. And I know that a lot of Americans go through this as well.”

Moulton aims to prioritize mental health for all Americans: “Our country is going to be healthier and stronger, and our economy will be better if we just deal with this issue. Just like we deal with physical ailments, right? There shouldn’t be a stigma. There’s no stigma if you break your leg. You just go to the hospital and you get it fixed, and then you’re back on your feet. And that should be the same with mental issues as well.”

Moulton gave credit for his decision to open up to his fellow Marines. “I hope that my talking about this is an example to others, that others will be encouraged to share their stories too,” he said. “But I also have to say that an inspiration to me is some of the young Marines that I served with. Younger than me, and who had the courage to share their stories before I shared mine.”

Not all of the viral moments are about policy. Sometimes they’re just personal stories. Former Colorado Gov. John Hickenlooper had a moment like that during a town hall with CNN when Bash asked about a story from his memoir.

“I was the youngest of four, and my dad died right after I turned eight. … I went off to college and for the first time she was alone in the house, and I didn’t realize how powerful that was until I got home at Thanksgiving.”

Hickenlooper recounted that he had agreed to see a certain movie with a friend. “I didn’t know what an X [rated] movie was. We thought it was a little naughty, but we didn’t think it was that bad. Again, you gotta understand, I was 18 years old.”

After discovering his mother had prepared dinner, he felt bad for not spending time with her and invited her along, anticipating that she would say no.

“She said, ‘I’d love to go’, because she didn’t want to be left alone in the house again. So I took my mother to see ‘Deep Throat,”’ he told the audience. 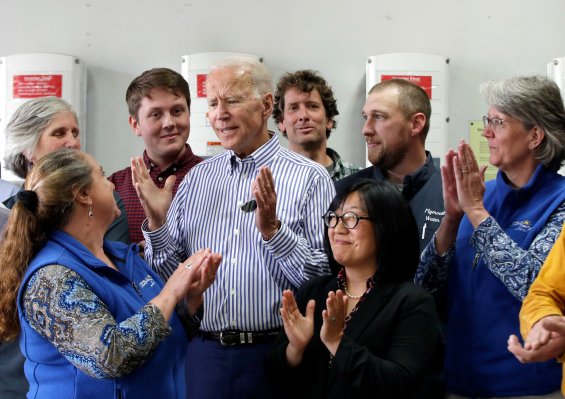 Can Biden Stay on Top of the Democratic Field?
Next Up: Editor's Pick