The Internet Is Turning Elizabeth Warren's Silencing Into a Rallying Cry: 'Nevertheless, She Persisted'

After Sen. Elizabeth Warren was silenced Tuesday night for reading a letter written by the late Coretta Scott King during the Senate debate over the nomination of Sen. Jeff Sessions as Attorney General, her supporters on the Internet took the opportunity to use Senate majority leader Mitch McConnell’s explanation for her rebuke as a rallying cry.

Reading the 1986 King letter that opposed Sessions’ federal judge nomination technically meant that Warren had violated Senate rules for “impugning the motives” of Sessions on the Senate floor, and now, the GOP-controlled Senate will not allow Warren to speak again on Sessions’ nomination. “She was warned. She was given an explanation. Nevertheless, she persisted,” McConnell said, according to The Washington Post.

It was these final three words that seemed to light a fire under social media users, inspiring the hashtags #LetLizSpeak and #ShePersists along with a barrage of posts in support of Warren that included women who made history from Rosa Parks to Princess Leia. 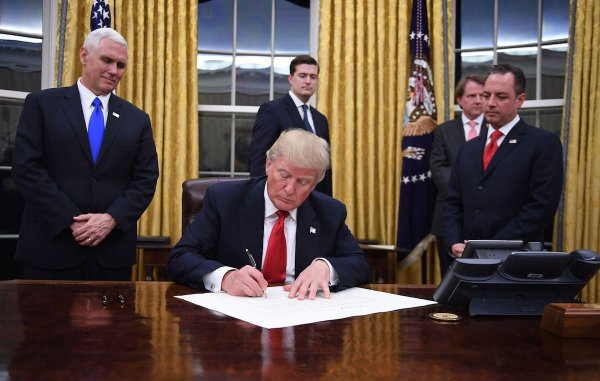 9 Executive Orders That Changed American History
Next Up: Editor's Pick