When Kyle Lowry dove into the stands to save a loose ball during Wednesday night’s Game 3 of the NBA finals — a hustle play that earns almost universal plaudits, at all levels of basketball — the last thing he expected was to be shoved by a fan he didn’t even hit, and be told to “go blank yourself.” For what? Doing his job too well? “I mean, I was furious,” says Lowry. “I’m not going to lie.”

The next day that fury turned to shock — for Lowry, his Toronto Raptors teammates, and the NBA at large. Lowry found out, via text message, that the man who shoved him wasn’t just a fan; he was Mark Stevens, the 59-year-old billionaire venture capitalist who owns a minority stake in the Golden State Warriors. “Unbelievable,” says Lowry. “Even worse. Even worse. He should understand this is what happens. This is basketball. I’m competing. I’m trying to save a basketball. I’m trying to help my team get a possession. It just sucks, man. It just sucks that you got people like that.”

Toronto’s Danny Green was on the court during the incident. “I looked at him and my first thought was, this guy, he’s court side, he’s got to be somebody,” says Green. “If you’re somebody and you’ve been court side before you should definitely know the rules and regulations. He’s an older gentleman, so I’m like what the hell are you doing? You’ve got to know better. You probably have kids.” Stevens is a father of three. “Do you teach your kids to react that way at the game?” Green says. “Why would you do that?… I was shocked, and a little appalled about his behavior.”

The Warriors apologized on Thursday; Lowry and other Raptors praised the team for the quick condemnation of one of its co-owners. Earlier on in the day, Lowry said he hadn’t heard from Stevens. “I don’t care to know him,” Lowry said. “He showed his true colors at the time.” Lowry said Stevens “shouldn’t be part of our league.”

Later Thursday, the NBA and the team announced that Stevens had been banned, effective immediately, from attending NBA games and Warriors activities for a year and fined $500,000. Stevens — a member of the USC board of trustees who donated $50 million to endow and name the USC Mark and Mary Stevens Neuroimaging and Informatics Institute, and is now managing partner at his family office, S-Cubed Capital — apologized in a statement and said he accepted his punishment. “I take full responsibility for my actions last night at the NBA Finals and am embarrassed by what transpired,” Stevens said. “What I did was wrong and there is no excuse for it. Mr. Lowry deserves better, and I have reached out today in an attempt to directly apologize to him and other members of the Raptors and Warriors organizations.”

Kyle Lowry of the Toronto Raptors argues with Warriors minority investor Mark Stevens after Lowry chased down a loose ball during Game 3 of the 2019 NBA Finals in Oakland, Calif on June 5, 2019.
Lachlan Cunningham—Getty Images

People sitting in court-side seats do occasionally overshadow the players on the court. Up in Toronto, disruptions have tended to be less serious: the rapper Drake has ticked off opposing players and coaches with his all-consuming support for his hometown Raptors. He’s exchanged words with Draymond Green in the Finals, and in the conference finals, Milwaukee Bucks coach Mike Budenholzer suggested he crossed a boundary from fan to active participant.

Part of the NBA’s appeal as a spectator sport is the crowd’s proximity to the floor, at least for those fans lucky enough to afford it. This intimacy makes the games louder and more exciting for the players, and given the prices for the seats, helps fatten their paychecks. But when fans go too far, like Stevens did, this proximity can be problematic, most famously during the 2004 Malice at the Palace in Detroit, a wild melee between the Indiana Pacers and Detroit Pistons players that spilled into the stands and scarred the league for a long time.

While this latest fan-player interaction wasn’t nearly as dramatic as that one, it’s caused considerable controversy because a team owner was involved. Outspoken Golden State star Draymond Green, for one, has argued that the term “owner” should be phased out, because it implies that players are property. Green has said the word brings slavery to mind. The racial undercurrents of the league adds another layer of sensitivity: most of the players are black, and an overwhelming majority of team owners are white — Michael Jordan is the lone black majority owner.

Some NBA teams have reportedly moved to phase out the word, and this incident, which involved a white part-owner of a team cursing at and shoving an African-American player doing his job, could speed up the process. “This idea that some white man can put hands on you, and you’re not supposed to respond, I think conjured up a lot of problematic images very specific to race,” says Todd Boyd, professor of race and popular culture at USC.

As for the actual basketball at the NBA Finals: Toronto holds a 2-1 series lead, with Game 4 on Friday at Oracle Arena in Oakland. Klay Thompson, who missed all of Game 3 because of his hamstring injury, will be back in the lineup: Kevin Durant is still out. “It’s been a fun Finals,” says Lowry. “It’s been a competitive Finals. It really sucks that this… had to be a part of it.” 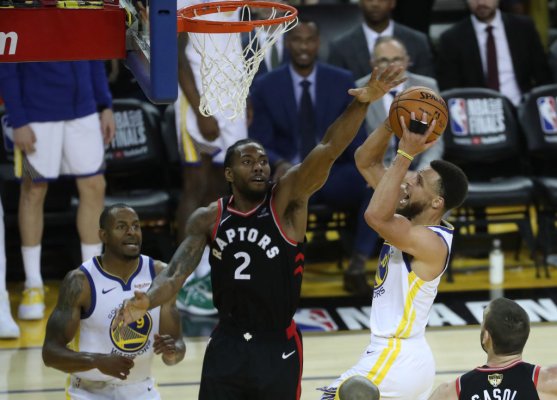 The Raptors Were Ready for Stephen Curry
Next Up: Editor's Pick