It’s a scene that plays out in living rooms around the world on a nightly basis. A parent is relaxing, watching TV while a toddler chills out nearby. In this version, though, when the dad jokingly asks his 18-month old son about the show, the toddler replies, engaging him in a lengthy conversation that is completely hilarious and completely captivated the internet.

In the now-viral video, D.J. Pryor, a comedian, uses his improv skills to start talking to his son, Kingston Jierre, about the show.

“They need to work on that, right?” Pryor says.

“Did you understand it, though?” Pryor asks.

“No,” Kingston says. From there the conversation continues with Kingston and Pryor swapping their thoughts about the show’s season finale, trying to guess what the show will do next season, all with Kingston acting like he fully understands everything going on in the conversation. The video of the exchange was shared on Facebook by Shanieke Pryor, who captioned the video, “Only this child!! Having a full-fledged conversation with Daddy and Daddy is just as bad🤣🤣” adding hashtags, “#TheseTwoAreAMess #OurHouseisAlwaysFullofLaughter #MrPersonality #HeNeedsHisOwnShow #KingstonJierre #KJP”

The video quickly racked up more than a million shares on Facebook and was shared across Twitter, even by Captain America himself, Chris Evans, who tweeted the video, writing, “I could’ve watched an hour of this.” The family was then invited to appear on Good Morning America.

While traditionally, moms appear to have a stronger baby talk game, according to one study showing that “mothers responded 88% to 94% of the time to the babies vocalizations, while dads responded only 27% to 33% of the time”, Pryor proves that dads can be just as good at the game.

While the video is undoubtedly funny, it’s also an example of a parent engaging in behavior that is beneficial to his child’s cognitive growth. Really! A recent study from York University showed that infants who are exposed to adult conversation have greater cognitive abilities.

Other studies have shown that starting from birth, the language an infant hears creates neural patterns that are retained for years. So go ahead and talk to your kid about TV or grocery shopping or the news cycle, and don’t be surprised if they talk back. 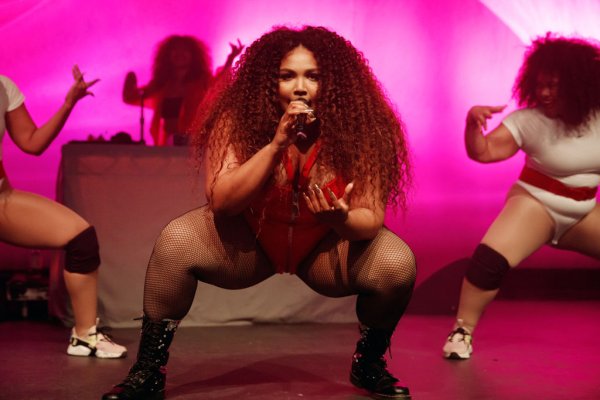 These Meme Videos Set to Lizzo's "Boys" Are an Internet Gift
Next Up: Editor's Pick