For the cover of the June 17 international issue of TIME on what author Tina Brown calls “the nervous breakdown in Britain” we reached out to British collage artist Christopher Spencer, aka “Cold War Steve.”

Spencer’s satirical artwork, published mainly on his @coldwar_steve Twitter account, has become synonymous with the frenzied zeitgeist of Brexit-era Britain. His surreal collages, where world leaders rub shoulders with minor British celebrities, have appeared in newspapers and magazines in the U.K. and have been exhibited in London galleries. This is one of the first times his highly U.K.-specific work has found a global audience.

“While I have never created something specifically for an American/international audience before,” Spencer says, “being commissioned to do the cover of TIME was mind-blowing and capped off a remarkable first half of 2019 for me.”

Asked about his inspiration for the cover, which imagines political and pop-cultural icons in a sinking London bus, Spencer replied: “The sinking London bus is a fairly obvious metaphor–as too the Union flag being waved by Boris Johnson, which is tattered and becoming torn down the middle.”

The accompanying essays, by British novelist Jonathan Coe and former Vanity Fair editor Brown, explore how the Brexit vote of June 2016 has impacted the country in the three years since. Says Spencer: “The saddest impact of Brexit I feel, is the way it has literally ripped the country in half.”

The artist’s book Cold War Steve Presents…The Festival of Brexit is out now. 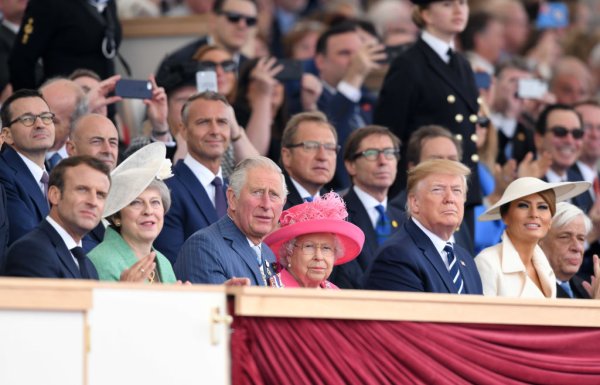 Shadow of Politics at D-Day Ceremony
Next Up: Editor's Pick