A man using a mobile phone walks past Google offices in New York on Dec. 17, 2018. A Congressional committee hearing began criticizing the spread of hate crimes in the U.S. and social media's role in the spread.
Mark Lennihan—AP
By Alana Abramson

House lawmakers are kicking off their antitrust investigations of technology companies by focusing on an industry crippled by the rise of big tech: local journalism.

The House Judiciary Committee, which announced a broad antitrust probe into the technology industry will hold its first hearing for the probe on June 11. The hearing, titled “Online Platforms and Market Power, Part 1: The Free and Diverse Press,” will focus in particular on how the dominance of Google and Facebook in online advertising has hurt the economic viability of local news organizations.

Rhode Island Rep. David Cicilline, who chairs the House Judiciary sub-committee responsible for the hearing, says the decline of local journalism has been one of the most devastating consequences of the rise of the tech giants, and must be illuminated.

“This is about the ability of people to access truthful, reliable local news which is essential to the functioning of our democracy,” he says. “The loss of a diverse and free press has consequences for the future of our democracy.”

As readership has shifted from print to online, local news organizations have been hit particularly hard by the strangle-hold Google and Facebook have on digital ad money. One media investment firm estimated that the two companies would take in 85% of all digital ad spending for 2018. The revenue loss has been disastrous for the viability of local news. According to a 2018 report from the University of North Carolina, nearly 1 in 5 newspapers, nearly 1,800 in total, have closed over the last 15 years.

While Google and Facebook have both pledged hundreds of millions of dollars into initiatives to help mitigate this problem, Cicilline says it doesn’t solve the larger issue of adequately compensating news organizations for creating content.

“You’re seeing examples all over the country where local newspapers are going out of business, laying people off, and they don’t really have the ability to negotiate because these two companies are so large and so dominant.”

Three witnesses are scheduled to appear so far at the hearing, although more could be added. They are: Gene Kimmelman, the president of Public Knowledge and a former senior antitrust official at the Department of Justice; David Chavern, the president of News Media Alliance, which represents 2,000 newspapers across the U.S. and Canada; and Sally Hubbard, Director of Enforcement Strategy at the Open Markets Institute, who worked on antitrust issues in the New York state government.

The Judiciary Committee announced on June 3 that it was opening a bipartisan investigation into the major technology companies like Google, Facebook Apple and Amazon, primarily designed to assess whether they are stifling competition. Cicilline aims to have a report completed by the end of 2020 with recommendations, including legislative fixes. But on a broader level, he says, the investigation will enable lawmakers to investigate the efficacy of antitrust laws in the 21st century.

“It’s easy to identify what the problems are and the anti-competitive behavior,” he says. “It’s harder to develop a solution. One of the values of the investigation is [making sure] we have the best data and the best thinking, so as we craft a response to this monopoly moment we are living in in this country we do it by relying on the best data and evidence.” 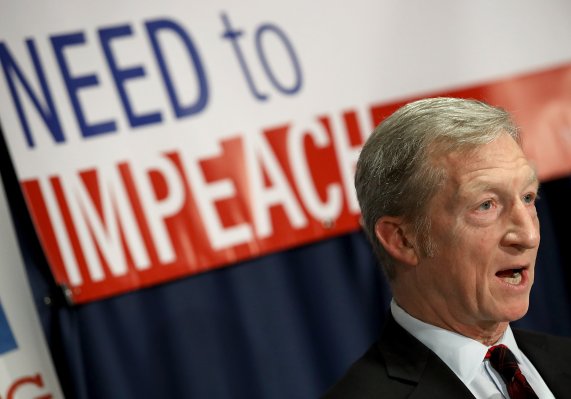 Activists Ramp Up Pressure on Congress to Start Impeachment Hearings
Next Up: Editor's Pick