Google, Amazon, Facebook and Apple Could Face Antitrust Investigations. How Do Those Work?

A man using a mobile phone walks past Google offices in New York on Dec. 17, 2018. A Congressional committee hearing began criticizing the spread of hate crimes in the U.S. and social media's role in the spread.
Mark Lennihan—AP
By Madeleine Joung

After unusual negotiations on the subject, the Federal Trade Commission agreed to handle any potential investigations into Amazon and Facebook, while the Department of Justice would handle Apple and Google parent company Alphabet. On Monday, a House Judiciary subcommittee announced that it would begin its own investigation.

The moves come as critics on both the right and left raise serious questions about the role of large tech companies.

The list of critics includes everyone from former Trump adviser Steve Bannon to Democratic presidential candidate Elizabeth Warren. President Donald Trump has also frequently targeted the companies, arguing without evidence that they are biased against conservatives and his Administration specifically.

Although Democrats and Republicans “may disagree about the specific approach that ought to be taken … from both ends of Pennsylvania Avenue, you’ve got an impressive broad coalition that says, hit them harder,” says William F. Kovacic, former FTC chairman under the George W. Bush Administration.

Here are answers to some questions you may have about the antitrust actions.

What is antitrust law?

In 1890, Congress passed the Sherman Antitrust Act, which prohibited “every contract, combination in the form of trust or otherwise, or conspiracy, in restraint of trade or commerce,” such as the Standard Oil Trust. The Clayton Act of 1914 expanded the definitions of anticompetitive activity, and the same year, the Federal Trade Commission was established to break up monopolies.

Has the tech industry faced antitrust cases before?

The Microsoft logo is pictured during the annual Microsoft shareholders meeting in Bellevue, Washington on November 29, 2017.
JASON REDMOND—AFP/Getty Images

The biggest antitrust case involving a major tech firm occurred under the Clinton Administration. From 1992 to 2001, the Department of Justice investigated whether Microsoft was abusing its market power with the Windows operating system to push consumers to use its Internet Explorer web browser.

Matt Murphy, a partner at venture capital firm Menlo Ventures, said the case ultimately fizzled out as Microsoft missed some key changes in how consumers use technology in the early 2000s. Eventually, rather than breaking up, the company settled with the Department of Justice, agreeing that they would not make exclusive licensing deals with computer manufacturers and would work better with third-party developers.

“Microsoft’s strategy became stale, they missed the move to mobile, so the regulators didn’t need to come in and split the company up,” he said. “It was companies like Apple who came in and created the mobile ecosystem, and Google who came along after that, and [Amazon Web Services] who created the new wave consuming enterprise technology. My point is that big companies were forced to innovate by their competitors, and that’s what keeps them more on their toes than, you know, DOJ.”

More recently, in 2013, a Federal Trade Commission investigation into Google came up emptyhanded.

How likely are the antitrust cases to succeed?

Experts note that antitrust cases are rare in part because regulators only like to bring cases they are sure to win. But even the potential for investigation can cause companies to rethink their approaches.

In a research note, analysts at investment banker Raymond James said the possible investigations could make it harder for the companies to continue buying up competitors.

“The biggest impact may be that future acquisitions of size will be much harder to do,” they wrote.

How do Congress’ antitrust investigations work?

Unlike the Federal Trade Commission and the Department of Justice, Congress has no enforcement power on antitrust violations. But that doesn’t mean its investigation won’t matter.

Instead, Kovacic argues that the House investigation could help build support to change antitrust laws to give regulators more power to go after tech monopolies, create new regulatory agencies to oversee Silicon Valley companies or even just to give the business owners second thoughts about their next corporate moves.

Regardless of the outcome, an antitrust investigation is “the equivalent of having the police car on the expressway that causes everybody to slow down a bit,” Kovacic says.

What role does the President have in antitrust investigations?

Though President Trump has encouraged antitrust investigations into the tech firms in interviews and tweets, he theoretically has no authority to demand them. Federal Trade Commission and Department of Justice antitrust investigations are historically independent from the White House, and regulations do not permit FTC commissioners to all be from the same political party.

In November, Donald Trump had told Axios on HBO, “I leave it to others, but I do have a lot of people talking about monopoly when they mention those three [Facebook, Amazon, and Google] in particular.”

He has routinely criticized Amazon owner Jeff Bezos, who also owns The Washington Post, and has argued for the U.S. Postal Service to raise the rates it charges the company. In December, a Trump-appointed commission recommended that the USPS raise those rates.

Trump has also argued, without evidence, that Google and Facebook are biased toward conservatives.

In February, the Federal Trade Commission launched a special task force to monitor the tech industry. 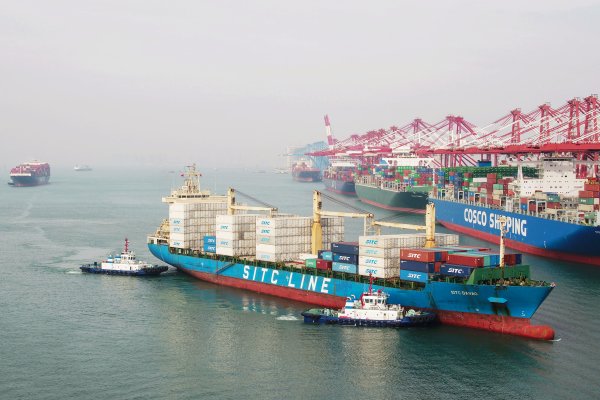 Trump's China Trade War Could Be Costly for Families
Next Up: Editor's Pick