Joe Biden Is on Top of the Democratic Primary Field. How Does He Stay There?

Before Joe Biden announced his presidential campaign, the former vice president privately worried about the fundamentals. Could he raise the money needed to mount a credible campaign? Could he assemble a diverse and experienced staff? Would he be a good fit for a Democratic base that’s drifted more to the left since he last ran?

A month into the campaign, Biden has checked each of those boxes, and then some.

He is raising — and spending — a mountain of cash; his one-day haul of $6.3 million sets him ahead of the Democratic pack, as does his $1.3 million (and counting) outlay on Facebook. He’s recruited an experienced and representative team of aides. And he has remained since his campaign launch atop the field of would-be rivals, including some who are much more liberal.

Now the question is whether that will be enough. During a recent campaign swing through New Hampshire, Biden showed some vulnerabilities that, while not fatal on their own, could be major obstacles on his path to the nomination.

A longtime senator who served two terms as vice president in what now feels like a different era, Biden has a lot of policy baggage on everything from criminal justice issues to abortion rights. An old-school pol who loves to hug old ladies and kiss babies, he continues to face scrutiny that adds an element of tension to every rally. And his position atop the polls puts him in the crosshairs of a historically large field, even as his lead feels somewhat fragile.

Aides have tried to protect Biden with a classic frontrunner’s campaign that limits accessibility and tries to keep the conversation focused. But even those efforts have their limits, as shown on Tuesday evening when aides had to play music to get Biden off stage when he talked too long. They can load the TelePrompTer but they can’t make him read it.

Ahead of that stop in a union hall in Concord, N.H., the crowd stretched around the building. The interest in Biden is real, but in a non-scientific survey of a dozen New Hampshire voters who waited in line to see him, none was a firm commitment. (This is typical at this point for famously fickle Yankees.)

Many voters, unprompted, said Biden needs to explain his handling of Anita Hill’s testimony during Clarence Thomas’ confirmation hearings, his vote in support of the Iraq invasion and his role in writing the 1994 crime bill that many in the Democratic grassroots now loathes. “He has to atone for those sins,” 29-year-old ACLU organizer Steven Kidder told TIME as he waited to get into Biden’s rally. Standing nearby, 20-year-old Alden Hussey of Concord observed dryly that at least “he’d be better than Trump.”

A day later, Biden stopped by a Manchester, N.H., Canadian-American restaurant famous for its five-pound plates of poutine, French fries smothered in cheese curds and gravy. New Hampshire voters, notoriously proud of their first-in-the-nation status on the primary calendar, were annoyed they were kept waiting. “I was a little pee-d off,” 72-year-old retiree Richard Moquin told Biden’s Sherpa-for-the-day, state Sen. Lou D’Allesandro. “He was supposed to be here at nine.” Biden walked in promptly at 10:01 a.m.

Moquin, who helped Dick Gephardt overpower Mike Dukakis in Goffstown, Manchester and Bedford precincts during the 1988 primary, said it was worth his time, but wasn’t firmly Team Joe and remained interested in seeing more from South Bend, Ind., Mayor Pete Buttigieg. “I think he’d be devastating on a debate stage against Trump,” said Moquin, who has worked on New Hampshire campaigns since 1976.

All of this speaks to the fragility to Biden’s ascent. Democrats universally say an ability to defeat Trump remains their top concern, and Biden alone dominates on that priority in polls. It alone, however, isn’t the entire ballgame. “We shouldn’t be talking about electability,” 16-year-old student Mattison Howard says. (New Hampshire lawmakers are considering a measure that would allow students like Howard to vote in the primary if they will be 18 by the general election in November of 2020.) “We should be talking about policy,” she continues. “What difference does it make if you elect someone who has bad policy?”

Rival campaigns rightly note that polls at this point are largely based on name-ID: Do people know who you are? Biden has near-universal name recognition and that helps to explain his status in the race. “I’m looking for stability. Things haven’t felt calm for the last couple years. We are sick and tired of the chaos,” 35-year-old law student Cynthia Keeley of Concord, N.H., tells TIME. “When Obama and Biden were in the White House, it didn’t feel this way.”

That familiarity may allow Biden to work at his own pace, on his own terms. His aides and allies say they will not be pressured to match the frenetic pace of some of his rivals. With more than 200 days before the lead off caucus Iowa, there is simply no reason for someone like Biden to sprint to a half-dozen events a day to introduce himself to potential supporters. Still, his problematic policy roll-outs have proven that Biden’s campaign faces challenges even on its own terms, which means treating his primary rivals as after-thoughts to his disdain of Trump. The staffers, too, have dodged engaging fellow Democrats. When last weekend’s Democratic Party confab in San Francisco turned, at times, into Biden-bashing, Team Joe declined to comment.

As has been the case in the post-World World War II politics, the front-runner has little incentive to take on would-be rivals or the press, instead hoping to run out the clock on an inevitable nomination.

While Biden has not gone as far as Hillary Clinton did four years earlier, when she used ropes to lasso reporters during one infamous New Hampshire campaign stop, there is definitely a sense that Biden is campaigning under glass. Aides sometimes wait until the last possible minute to advertise his upcoming events, minimizing his exposure. His campaign headquarters, which will be in Philadelphia, isn’t expected to open for a few more weeks. He’s working on a number of other policy proposals but is not going to rush them just to snag headlines. Biden is on-board for the slow boil approach, arguing he’s so far ahead he doesn’t need the headache or headline.

Biden aides have also done their solid best to limit his exposure to potentially problematic scenarios, although he has at times responded to unscheduled shouted questions and routinely does interviews with local reporters.

And then there are concerns that can’t be managed, such as the question of age. If elected, Biden would be the oldest President ever to take the oath.

“I’d probably prefer a younger candidate. With the new problems that we face, I don’t know if someone in their 40s or 50s gets the new solutions,” says 20-year-old Nick Beall, a public-policy student from Manchester, N.H., who is looking at former Rep. Beto O’Rourke of Texas and Buttigieg. And it’s not just young voters who have worries about Biden’s age. “I am concerned about his age,” says Cathy Martone, a 66-year-old retired fifth-grade science teacher who arrived more than two hours before the doors opened to make sure she got inside to see if Biden were better in person than he’s been on TV. She has now seen Rep. Tulsi Gabbard of Hawaii, Sen. Bernie Sanders of Vermont and former Massachusetts Gov. Bill Weld, a Republican. (Her efforts to see Buttigieg proved unsuccessful.) “I saw him on ‘The View.’ It was not a good debut. I think he was all over the place,” Martone said of Biden.

That’s not to say Biden isn’t good at hand-to-hand politicking. His second trip here in New Hampshire was in part a response to his first, when he faced questions about his environmental record from the likes of freshman Rep. Alexandria Ocasio-Cortez, who all but called Biden a candidate from yesterday who represented a bland moderation. On this, his second trip as a declared candidate, he wanted to aim an air horn at that knock. He claimed his version of a Green New Deal would make the United States into the “single greatest exporter of renewable energy technology in the world.” “We can turn this around. We really can,” Biden said in Plymouth, N.H.

Some of his supporters think Biden is more attuned to his party than he’s given credit for. “A lot of people think the party has moved far to the left,” former four-term New Hampshire Gov. John Lynch tells TIME. “I don’t think the party has moved since I was Governor. The noise is on the far left, but that’s not where the party is,” adds Lynch, who is backing his longtime friend, Biden. (For his part, Biden suggested Lynch would be a member of his Administration.)

Biden’s team is also looking ahead to the first primary debates later this month. Aides say that he’ll abide by a promise not to attack other Democrats, but he will point to past decisions that raise concerns about their political judgement. If, say, California Sen. Kamala Harris were to attack Biden’s support for the Clinton-era crime bill, he might parry with a studied response of her record as a local prosecutor and attorney general in California.

Meanwhile, the Biden campaign is working to monopolize the political establishment in statehouses and lining up delegate slates for the convention in Milwaukee — dreadfully dull work that consumes time and cash, but moves many of his rivals haven’t yet begun in earnest. His team tasked with delegates can almost recite delegate-selection rules from memory. Rules changes, meanwhile, drastically reduced the number of states who pick delegates at caucus sites, greatly cutting into a potential threat from candidates like Vermont Sen. Bernie Sanders.

As others campaign as outsiders catering to those who feel aggrieved by the political system, Biden is embracing his four decades in national politics as an asset. The doubts if Biden, the ultimate insider, could hack it among voters looking for change seem to have faded for the moment. No one is more relieved — and nervous — than Biden himself. 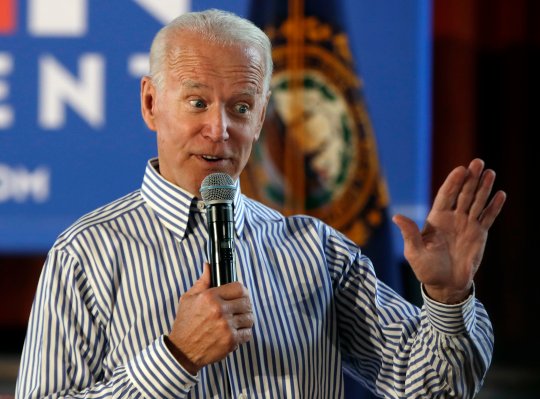