Joe Biden had fun on his second campaign trip to New Hampshire. The same could not be said for his campaign staff, nervously watching from the sidelines.

On several occasions, the former vice president signaled that he was going to ignore the advice of his large and experienced staff, make needlessly risky jokes and go on conversational detours far away from the message of the day onto any of a half-dozen topics.

It was a technique at odds with the carefully laid-out campaign strategy of maintaining the frontrunner’s aura of invincibility, avoiding contentious subjects and glossing over problem areas. But it was the essence of Joe Biden himself, the core of campaign instincts forged well before he became a national figure.

Sometimes it meant telling a story that was not quite right, despite aides’ reminder that, no, that’s not entirely accurate. Other times it was citing statistics that he acknowledged might be wrong. (“Don’t hold me to that” was a favorite refrain.) And at still other times it seemed he hadn’t quite learned the lessons from a pre-campaign conversation about his frequent invasions of women’s personal space.

Biden was clearly aware of the sore spots. When he was about to venture into a story filled with warning signs, he would point to the press and say he was going to be very, very intentional with the details and, as President Donald Trump is prone to do, imply they lacked credibility — in this case, because they were too young to have the full context. (“I want to be very careful how I say this so the press doesn’t go nuts on me,” he said Tuesday.)

In a Concord, N.H., town hall, he said he was taking great care not to mimic an islander affect of someone he met in Saint Croix, he immediately reversed that instincts 10 seconds later when he adopted a vaguely Caribbean accent to share an electrician’s side of a conversation.

“I won’t say, exactly what he said because, as you know, a lot of folks down there speak Creole,” Biden told the crowd. Biden said he thanked the worker for helping restore power after storms hit the island where he and his wife rent a home during New Year holidays. “He came down said some version of, ‘Are you kidding me, fella?’” Biden told his crowd. Then, came the affected version: “Are you serious, man?” The “man” sounded more like “mah-n.”

The scene was but one piece of an otherwise problematic Tuesday for Biden. As he was traveling southward from New Hampshire’s vast and sparsely populated North Country, critics were charging that parts of a clean-energy plan his campaign released that morning appeared to closely track the wording of other plans. It was a minor story, but the kind he can’t afford given the allegations of plagiarism that sank his 1988 campaign.

Aides quickly added links to Biden’s source material, but it was an unnecessary headache for a candidate with a Rolodex of experts at his command who had mapped out the release of the plan and visits to New Hampshire green-tech sites ahead of time.

At an evening town hall aimed at electrical workers who could benefit from such a green-tech investment, Biden was slated to deliver a brief opening statement, loaded onto teleprompters, and then take voters’ questions. He deviated from the script, left the podium and then the stage altogether. He started with what aides had hoped would have been his headline of the day, the environmental policy.

But by the end of opening statement to his town hall, Biden had noted that his home-state of Delaware has more minorities than New Hampshire, mentioned that he wanted former New Hampshire Gov. John Lynch in his Administration, reminisced about how he enjoyed having a new car for the prom because his dad ran a dealership and recalled how Barack Obama often overstated Biden’s working-class roots. There was also loose talk about overtime regulations, NATO’s future, Mitch McConnell’s deal-making, Chinese “xenophobia” and gay rights. Eventually, the teleprompter operator just gave up trying. Biden kept trying to wrap up but kept having another thought. He said “lastly” at least three times in trying to nail his landing.

Forty-five minutes later, Biden then said he would take questions “if you’re willing to stick around.” Some people left. Others stayed to hear the questions. Biden took four, at which point he recognized he had wrongly said being LGBT was a “decision.” One self-described ACLU voter asked Biden if he would commit to reducing the prison population, which many believe to have swelled because of a tough-on-crime law he helped pass in the 1990s. Biden rejected that: “To arbitrarily say, I’m just going to make a commitment I will cut arbitrarily in half or by a third or by 90% is not a rational way of going about it.”

A staffer had announced it would be the last question. Then, Biden spotted someone in the audience he wanted to answer. “I know they said last question…” he said, not at all sheepishly. He then answered a fifth question, about the Social Security system, by saying immigrants in the United States were propping up a teetering system. He then made a detour to tell a version of his visit with Chinese leaders back when he was Vice President. At the time, Biden said he told his Chinese counterparts that their country, too, was heading toward an imbalance between workers and retirees unless they either embrace newcomers or end their One-Child Policy. “They’re xenophobic. They don’t want anybody in,” he said.

When Biden tried to take a sixth question, his staff started playing music, just as they do when an Oscar speech goes long. It was time to cut him off.

Biden then met with voters and took selfies for the next 18 minutes. During that time, nervous aides kept reporters away from the former vice president. Music was blaring so that his conversations couldn’t be heard. (To be fair, other campaigns do that as well.) And, as he was walking toward the door, Biden picked up on the one reporter-driven question that wasn’t necessarily about him: What about Trump’s visit with the British royals?

“God save the Queen,” came his reply as he exited a side door. Finally, it seemed, Biden was remembering the need for discipline. 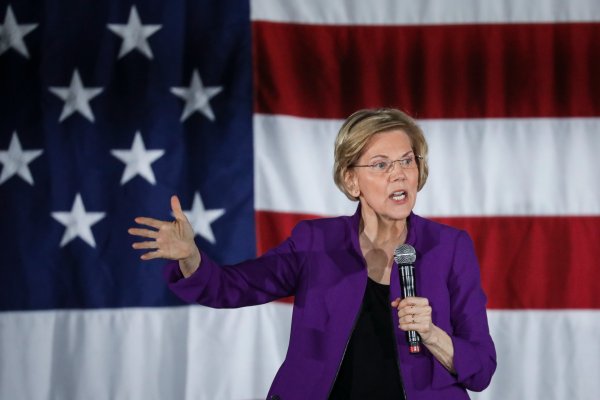 Elizabeth Warren: End the Commerce Department
Next Up: Editor's Pick