For the second time in his life, Tom Rice, a 97-year-old from San Diego, has parachuted into Normandy. Wednesday’s feat, however, was a lot more joyous than his first jump three-quarters of a century earlier.

Rice’s leap was part of the 75th anniversary of D-Day, the allied invasion of the French region of Normandy that began on June 6, 1944, and marked a turning point in World War II. Among the commemorative events was a parachute jump, which included Rice and about 200 other parachutists.

“It went perfect, perfect jump,” he said, according to the Associated Press.

Rice jumped in tandem from a C-47 transporter Wednesday and landed in the same area as his first jump — outside the Normandy town of Carentan, the site of a key WWII battle.

D-Day was a joint effort by the Allied forces in World War II to liberate Europe from Nazi occupation. It was the largest documented sea-born invasion in human history and is widely regarded as a turning point in the war. Rice and other parachutists risked their lives parachuting into the region before the sea invasion, entering into battles and heavy fire.

World leaders are marking D-Day in several ways this week. On Wednesday, President Trump joined Queen Elizabeth II in Portsmouth, England to honor those who fought.

Rice, meanwhile, proved he was as courageous Wednesday as he was 75 years ago. 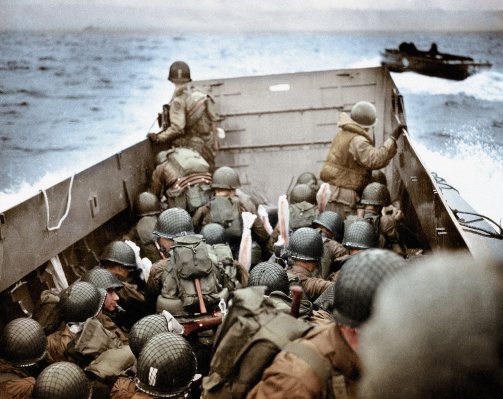 What Does the ‘D’ in ‘D-Day’ Stand For? Experts Disagree With Eisenhower’s Answer
Next Up: Editor's Pick