Local leaders originally intended it to be a humble ceremony of remembrance for the surviving combatants of Europe’s finest hour. But the presence of glittering royals and heads of state at Portsmouth’s D-Day commemoration on Wednesday turned the event into a far more formal — and occasionally contentious — affair.

President Donald Trump, whose first state visit to the U.K. had been organized to coincide with the 75th anniversary of the D-Day landings in 1944, took pride of place next to Queen Elizabeth II in the royal box. The sometimes emotional ceremony marked the day when more than 75,000 mostly British, American and Canadian troops departed from this city in southern England toward the beaches of France, in what would become a turning point in the war against Nazi Germany.

Before the ceremony started, residents of Portsmouth told TIME they were skeptical of whether the presence of so many world leaders would actually benefit veterans, who are now all aged in their 90s or beyond. Security had to be ramped up significantly, with extra police officers sent from across the country.

“When we originally planned the event, this was going to be an opportunity for the veterans to meet the Queen, probably for the very last time,” said the leader of Portsmouth city council, Gerald Vernon-Jackson. “It was going to be a very open event for the public to watch and attend. Now it’s a very different thing.”

Each of the world leaders had signed a “D-Day Proclamation” in which they pledged to “work constructively as friends and allies to find common ground where we have differences of opinion and to work together to resolve international tensions peacefully.” But amid the military flypast, speeches from veterans, and commitments from political leaders to work together and never forget that historic sacrifice, the event served to highlight political divisions apparent in the host country.

May, overseeing the proceedings, is scheduled to resign as leader of her country this summer after being forced out over Brexit. Trump, who haltingly read a short commemorative prayer by FDR, had seemed much more comfortable two days earlier dining in opulence in Buckingham Palace — despite protests on the streets of London against his visit. Macron, whose popularity has waned amid the Yellow Vest protests, apparently felt comfortable enough to depart from the script of the mostly stage-managed affair to say a few words: “Let me first thank you, sincerely, on behalf of my nation.”

Yet for the most part, politics took a backseat on Wednesday to the military parades, historical reenactments and readings of wartime documents. May read from a letter written by Captain Norman Skinner to his wife Gladys two days before D-Day: “I’m sure that anyone with imagination must dislike the thought of what’s coming, but my fears will be more of being afraid than of what can happen to me,” she read. “You and I have had some lovely years which now seemed to have passed at lightning speed.” Captain Skinner died in the assault.

Les Hammond, one D-Day veteran aged 94, told TIME on Southsea Common that he was happy so many heads of state were there to commemorate him and his fallen comrades. “I feel the top brass, the important people, they represent us,” he said. “I don’t feel in any way that we are second class [compared to them]. I’m very much a royalist.” What about Trump’s presence, though? On that, Hammond was diplomatic. “Do I have to tell you?,” he asked with a wry smile.

Hammond was one of more than 250 veterans attending D-Day commemorations in Portsmouth on Wednesday; he is part of a dwindling group of men and women who can remember a time when Britain faced an existential threat from abroad.

Historians and social scientists often say that war memorials are just as much about fostering a national narrative as they are about remembering the fallen. But in a Britain divided by Brexit, that sense of national identity is less secure than ever. In that context, what else is there to do but stand in awe of the human sacrifice of those 75,000 troops who piled into boats on June 6, 1944 to save Europe from Nazi rule, and the few survivors who represent that generation?

“It’s quite emotional I suppose,” said Hammond, the veteran, eyes welling up. “I didn’t think I’d feel like this, but I do.” 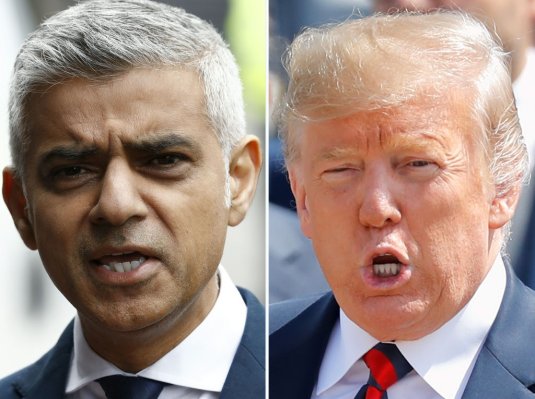 Trump Lashes Out at London Mayor Ahead of U.K. Landing
Next Up: Editor's Pick