Homelessness in the city of Los Angeles has increased an estimated 16% since 2018, according to the Los Angeles Homeless Services Authority (LAHSA), an agency that oversees government funds for homeless services in Los Angeles County.

Previously, the 2018 survey had shown a slight decrease in the homeless population from 2017.

The uptick comes two years into a local 10-year initiative to aid people in need, which includes investments of about $355 million annually, along with a $1.2 billion investment by the city, to build thousands of supportive housing units over the course of the next decade.

The LAHSA blamed “economic forces” that have outpaced the growth in resources for people who are experiencing homelessness in a statement released on Tuesday.

“Our ability to reach, serve, and house people experiencing homelessness has risen enormously since voters made unprecedented investments in our homeless services system in 2016 and 2017,” said Peter Lynn, executive director of LAHSA. “And at the same time our regional housing affordability crisis continues to drive thousands into homelessness. It’s critical that we work with local community members and every level of government to increase affordable housing, limit rent increases, and prevent unjust evictions while we continue to scale up and refine our system.”

Los Angeles Mayor Eric Garcetti responded to the report on Twitter Tuesday, calling for continued dedication to the issue.

“We cannot let a set of difficult numbers discourage us, or weaken our resolve,” Garcetti said in a tweet. “And I know that, if we keep working together, believing in one another, and caring for people in desperate situations, we will end homelessness in this city.” 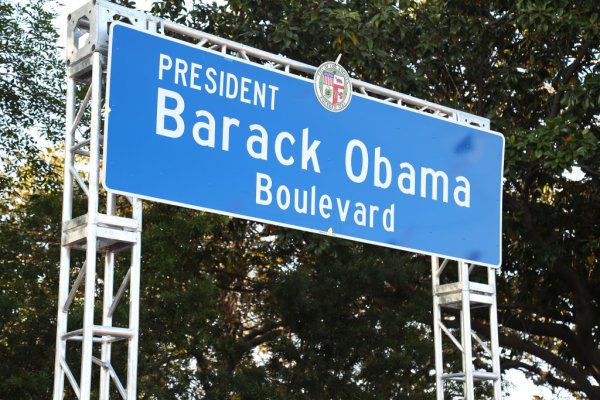 Los Angeles Renames Road in Honor of Barack Obama
Next Up: Editor's Pick