Homeless encampment resident Tammy Schuler kisses one of her pet dogs beside a row of tents and tarps that line the Santa Ana River bicycle path, near Angel Stadium in Anaheim, California, January 25, 2018.
Robyn Beck—AFP/Getty Images
By Katy Steinmetz

Tackling California’s homelessness crisis is a major focus for lawmakers in Sacramento. Several weeks into the current session, dozens of bills related to the issue have already been filed. Among them is a measure that state Sen. Robert Hertzberg describes as “raging common sense:” spending money to shelter not only homeless people, but also their pets.

Hertzberg said he started hearing about the problem while attending neighborhood council meetings back in his Los Angeles-area district. Over and again, constituents who were worried about the well-being of the growing homeless population — as well as the proliferation of tent cities — voiced the same concern. “People wouldn’t go into shelters because they want to take care of their pets,” Hertzberg says. “Well,” he recalls thinking, “here’s an easy way to get a lot of people off the street.”

According to federal estimates, about a quarter of all homeless people in the nation live in California, totaling nearly 130,000 on any given day. And the state has the highest rate of unsheltered homeless individuals, around 70%, meaning that they are very likely to be spending their nights outside rather than in a bed provided by a city or non-profit.

Sometimes there aren’t enough beds to go around. And sometimes people forgo available beds, which can be gateways to other services and more stable housing. One reason this happens is because many homeless individuals have pets, and many shelters don’t have infrastructure necessary to care for them, advocates say. A bill Hertzberg has proposed, S.B. 258, would dedicate $5 million to shelters to provide food and basic care for animals belonging to residents.

“And if it starts working,” Hertzberg says, “I’m going to ask for more.”

According to one non-profit’s estimate, up to 10% of homeless people may have pets. Other estimates suggest the number could be twice that. “For some of them, it may be their only family, their only friend,” says Jennifer Fearing, an animal advocate and lobbyist who worked with Hertzberg’s office on the bill. “If they’re going to transition into other housing, their animal is part of that puzzle.” Some shelters put conditions on allowing pets, requiring documentation that shows they are support animals or up-to-date on their vaccinations. Others don’t allow them period. And this leads to a subset of people “who are just going to be unwilling and unable to access the help they need,” Fearing says.

It’s not clear how much a measure like this could affect California’s outsized homelessness problem. Hertzberg doesn’t have a specific goal in mind but contrasts this small step with comprehensive programs that can take months or years to come to fruition, whether that’s because they’re so ambitious or because they get tied up in court. “I’m just trying to find something that has an immediate impact,” he says.

Some shelters are already embracing this more holistic approach. In Sacramento, Front Street Animal Shelter — part of the city’s animal control services — opened a pet-friendly facility in December 2017, hoping to bring more people inside a local triage center during winter by offering to shelter their pets as well. “Pets created a barrier,” says communications manager Bobby Mann. “People didn’t want to feel like they were abandoning their animals.”

Over the course of the past year, residents brought in more than 300 pitbulls, Labrador retrievers, chihuahuas and German shepherds. The policy attracted people who wouldn’t have used the shelter otherwise, Mann says, and also presented an opportunity to provide basic veterinary care for animals that can pose public safety risks. While Volunteers of America saw to the owners, Front Street employees would vaccinate, microchip and feed their pets. Mann says they also offered free spay and neuter services, as well as training for owners of animals that are at a higher risk for biting people.

The cost for this was roughly $50,000, according to Mann. But he says it’s hard to quantify the return on investment. Making sure animals in the city are healthy is an end in itself, he explains, and offering to care for the pets helped staff build trust with people who can often be suspicious of officials. “Some people wouldn’t accept medical care for themselves but would for their animals,” Mann says.

In heated conversations about animal welfare, some people will question whether homeless people should have animals whom they might struggle to feed or provide proper medical attention. Mann points out that some people who showed up at the triage center had lived in a home with their pet before losing housing. “Many people are just two or three paychecks away from being homeless,” he says.

Many advocates also suggest that it would be inhumane to break up pairs. Pets can provide emotional and social stability for individuals who lack it elsewhere, they say, as well as protection. “This is a relationship we want to support,” Fearing says. “We believe in the human-animal bond.” One study of homeless youth in Los Angeles found that, while having a pet made it more difficult to stay in a shelter, those with animals also reported fewer symptoms of depression and loneliness. Nearly a quarter of people in the study had pets.

Hertzberg knows this bill is not a panacea but is hopeful that it will be a measure that can get broad support as lawmakers and other leaders try to reverse the tide on homelessness. “Every corner of the state,” he says, “sees this as a top priority.” 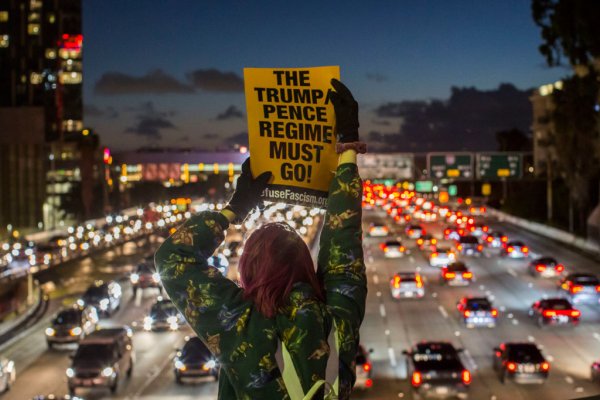 California's Lawsuit Over Trump's Border Wall Is the State's Latest Act of Resistance
Next Up: Editor's Pick