Asian American Chefs Are Embracing Spam. But How Did the Canned Meat Make Its Way Into Their Cultures?

From a food truck peddling Hawaiian-Korean fusion dishes in Seattle to an underground Japanese speakeasy in D.C. to a Korean barbecue restaurant that focuses on home cooking in New York City, one ingredient is surprisingly constant: Spam.

In recent years, a growing number of Asian American and Pacific Islander chefs are working against anti-Spam stigma to bring the meat to the American fine-dining scene. But how did the pink block of meat, a product of American industrialization, make its way into these Asian cuisines in the first place?

Hormel Foods Corporation, a U.S.-based food conglomerate, produced the first can of Spam — a mix of pork, salt, water, sugar and sodium nitrite — in 1937 in Minnesota. (Modified potato starch was added in 2001 to minimize the thick layer of gelatin.) But the canned meat really rose to international prominence during World War II.

After the bombing of Pearl Harbor, the American military was deployed to the Pacific, and troops made their way to places like Guam, Japan, the Philippines and South Korea. Wherever American troops went, Spam followed, says Robert Ku, a professor of Asian American Studies at the State University of New York at Binghamton and the author of Dubious Gastronomy: The Cultural Politics of Eating Asian in the USA. Though brand-name Spam was not always part of official G.I. rations, it had a number of wartime and post-war uses, and stuck around in places that experienced prolonged American military presence after the war ended.

But the food brought with it a complicated set of meanings. With mass destruction having created food shortages and the U.S. participating in rebuilding the region, Spam became a symbol of American generosity in helping feed the people, Ku says. At the same time, however, it was a reminder of immense suffering.

In the Philippines, people were fleeing from Japanese invasion, and resisting its occupation from 1941 to 1945, when they were first introduced to Spam. On some Pacific Islands, Spam became a necessity for survival for many local residents due to food rationing and restrictions during the war. And for many Japanese Americans, their love for Spam began with one of the most painful memories, Ku writes in his book: The U.S. government sent canned meat to the incarceration camps where people of Japanese descent were forced to relocate and later detained from 1942 to 1945.

During this period, Spam began to make its way into local dishes. Barbara Funamura, a Japanese-American woman from Hawaii, is credited with having invented Spam musubi, a slice of grilled Spam on top of a block of rice, wrapped together with nori. A similar narrative repeated itself on the Korean peninsula during the Korean War: People would rummage through the leftovers of the American military bases and create a dish using items they found. The dish, known as budae jjigae or army stew, combines traditional Korean ingredients, such as kimchi and rice cakes, with American “novelty,” like Spam and American cheese.

“It’s tinged with a certain amount of sadness,” says Sohui Kim, the owner and chef of Insa, a Korean barbecue restaurant in Brooklyn, N.Y. “But the resiliency of Korean people — they’ve taken something that was so foreign and then they were able to assimilate it and sort of make it make sense in their cuisine.”

The Asian regions that were introduced to Spam weren’t the only places where the meat showed up in the post-war years. In Britain, during the economic hardship that followed WWII, Spam was an affordable alternative to fresh meat. But, Ku says, as its popularity there waned, the British contributed to many stereotypes people now have about Spam — notably, thanks to the Monty Python sketch that famously highlights the ubiquity of the meat. In the Asia-Pacific region, however, Ku says that locals never had an opportunity to make fun of Spam.

“It may speak to the relative economic differences between Britain and the Pacific during the post-war time,” he says. “The British were able to recover somewhat economically, whereas the Asian-Pacific places were slower to.”

The stigma kept Andrew Chiou, a Taiwanese American chef, from using the ingredient early in his culinary career. For Chiou, Spam was a convenience food. His family would take it straight out of a can, fry it like deli meat and then throw it in his backpack when he would go hiking or camping. Chiou’s Washington, D.C., restaurant Momo Yakitori now uses Spam, but he says that’s not because of any fond childhood memories. Rather, he started doing more research about Spam after guests asked repeatedly if he could make a dish with it. “It was delicious,” he recalls experimenting with the ingredient. “It wasn’t the Spam I remember eating.”

Now, he grills Spam, wrapping it in rice and nori, along with soft scrambled eggs, kewpie mayonnaise and grilled cabbage in musubi. He also sautés it and puts chopped Spam in potato salad, a play on a dish his mother used to make.

Sohui Kim of Insa also says she had a “rocky” relationship with the ingredient and avoided it throughout her youth. She didn’t enjoy the flavor and saw the food as something that belonged to hard times. She recalls that she would always poke the Spam strips out of kimbap, a Korean rice roll her mom made. But as Kim grew older, she started embracing more different types of food and her palate turned around. “It’s all about your identity, your national identity, your personal identity, your family identity, and it sort of fuses,” she says. “And somehow Spam is there.”

She makes her own version of Spam in-house and guests can add it into dishes like army stew, kimchi fried rice and bibimbap (vegetables over rice).

Ku says the stigma about Spam as a “poor man’s meal” still exists in the United States, and “the only time you will see Spam in an American restaurant is if the restaurant is Filipino or Korean or something of that ilk.” However, he says that Asian American chefs are contributing to elevating Spam into an interesting culinary ingredient. “There is something quirky yet meaningful to these Asian Americans, who by consuming Spam are really embracing their histories and experience and the legacy as Asian Americans.”

Kamala Saxton is a co-founder of Marination, which features Hawaiian-Korean fusion food. She started with a food truck in 2009 and has since expanded the business to six restaurants. She recalls not being able to find Spam on any menus in Seattle’s restaurants when she first started in the industry. Now Spam musubi sells out every day at her restaurant. “People are making their own homemade Spam,” she says. “It has come a long way in the last ten years.”

“The Spam brand is special to those cultures and generations have grown up eating creative dishes like Spam musubi or budae jjigae,” said Brian Lillis, the product’s brand manager. “It’s no surprise that if they become chefs, that the Spam products can be found onto their menus.”

Ravi Kapur, the chef and one of the owners of Liholiho Yacht Club, makes Spam in-house, too — and he did not know there was a stigma about Spam until he left his hometown Oahu, Hawaii, for college. “It was just a part of everyday life in a way,” says Kapur.

That said, he hopes the story he tells doesn’t stop at Spam.

He says when he uses Spam in his cooking, it ties him back to his roots, but that’s not the only tether he has. “Is it my favorite dish on the menu? Absolutely not. Is it the most important tool in my tool kit? Absolutely not,” Kapur said. “It’s just one of the many things that remind me of where I came from.”

Armando Litiatco, who owns F.O.B., a restaurant featuring Filipino barbecue in Brooklyn, shares similar sentiments. He only serves Spam twice a week for brunch, slicing the meat and smothering it in mustard, brown sugar and then searing it the same way his mother would make them when he was growing up.

He says even though he keeps it on the menu for customers who love it, he battles with himself every time he tweaks or reprints the menu at the restaurant. Litiatco says it bothers him when people associate Spam with Filipino food: “I don’t want it to define the cuisine.” Despite this, he recognizes the shifting perspectives among American diners. He thinks they are not only more open to Spam, but also “deep Asian food” that goes beyond Asian-American staples like chow mein and General Tso’s chicken. “There are so many islands — 7,000-plus islands in the Philippines,” he said. “There are so many different flavors.”

Ku, the author of Dubious Gastronomy, says that new openness says something about the country’s multicultural palate — and that, in fact, it’s important to remember that the unique international history of dishes like these spins on Spam is what makes them not just Asian American. They’re also, he says, simply American, period.

“Asians have contributed to American food since the 19th century,” Ku said. “When we talk about these Asian chefs opening up restaurants, showcasing Asian food, it’s very much an American phenomenon as much as it is any other kind of phenomenon.” 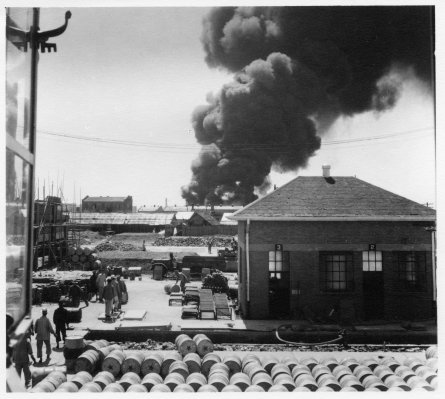 'Sitting on Top of Liquid Dynamite.' Inside a Long-Lost Eyewitness Account of the Communist Takeover of Shanghai
Next Up: Editor's Pick