If season 8 of Game of Thrones has taught us anything, it’s that prophecies aren’t always what they seem. Take the infamous valonqar prophecy, for example. Many fans believed that Jaime or Tyrion would ultimately be the one to kill Cersei because of Maggy the Frog’s final prediction for Cersei’s future in George R. R. Martin’s A Song of Ice and Fire book series. However, it turns out the show didn’t just nix the valonqar line so as to not give away what was coming. Despite the fact that all of Maggy’s other predictions came true, in the end, it was the crumbling Red Keep that killed both Cersei and Jaime.

Unlike with the valonqar, the show has emphasized the importance of the Prince That Was Promised prophecy several times, leading some fans to believe its fulfillment was inevitable. But due to the uncertain nature of prophecies in the world of Game of Thrones, it’s still unclear whether any of Westeros’ major players actually turned out to be the Prince. Not to mention that since Martin has yet to release the final two novels in his series, it’s also possible that the prophecy will play out differently in the books and the evidence we’ve cited from A Song of Ice and Fire will be irrelevant.

But for now, let’s focus on how the prophecy appeared to play a role in Game of Thrones‘ final season. After Arya killed the Night King in the third episode of season 8, some fans were convinced that, after all this time, it was actually the youngest Stark sister who was the Prince That Was Promised.

But judging by that heartbreaking twist in the series finale, it seems as though Jon Snow may be the true reincarnation of legendary hero Azor Ahai. Let’s dig into all of the details.

After getting a firsthand look at the death and destruction that Daenerys had wrought on King’s Landing and hearing Tyrion’s argument for why she was not the right person to rule the Seven Kingdoms, Jon sought out the Mother of Dragons in the Red Keep’s throne room.

The two then had an emotional final conversation in which Daenerys pled with Jon to be with her so that they could rule together and Jon questioned how she knew she was doing the right thing. Jon then proclaimed that she would always be his queen and they kissed before he stabbed her in the heart with a dagger, killing her.

Other than being the one who killed the Night King, Arya didn’t really fit any of the other criteria for being the chosen one. Jon, on the other hand, has not only long been touted as one of the most likely candidates to be Azor Ahai come again, but he also fits the Prince That Was Promised mold presented in Martin’s series — in a metaphorical sense, at least.

In the books, the Prince That Was Promised prophecy foretells that the Prince is destined to “lead the people against a darkness” with a flaming sword called Lightbringer. “There will come a day after a long summer when the stars bleed and the cold breath of darkness falls heavy on the world,” Melisandre tells Davos in A Clash of Kings, the second novel in the series. “In this dread hour a warrior shall draw from the fire a burning sword. And that sword shall be Lightbringer, the Red Sword of Heroes, and he who clasps it shall be Azor Ahai come again, and the darkness shall flee before him.”

We first learned about the Prince That Was Promised prophecy in the show when Melisandre, a Red Priestess in the faith of R’hllor, proclaimed Stannis Baratheon to be the chosen one in season 2. But after Stannis was defeated by Ramsay Bolton and killed by Brienne, Melisandre changed her tune. Following Jon’s resurrection and Daenerys’ arrival in Westeros, Mel came to believe that both the former King in the North and the Dragon Queen were destined to play a part in the prophecy. Game of Thrones continued to lean into the idea that either Jon or Dany would be the one to kill the Night King, and ostensibly fulfill the prophecy — right up until the moment Arya destroyed him.

The theories surrounding this idea were largely based on the assumption that the “darkness” mentioned in the prophecy was a reference to the White Walkers. But now that the finale has aired, it seems as though it could have actually been a reference to Mad Queen Daenerys or, perhaps more broadly, the darkness of humanity itself. “What if the Night King was never the one to bring true darkness to the realm,” one Reddit user theorized leading up to the episode. “What if Jon snow is still the Prince That Was Promised and will still fulfill the prophecy of Azor Ahai by plunging his sword into the true bringer of darkness: Daenerys Targaryen.”

We’ll get back to how Lightbringer fits into Jon’s story in a minute, but first let’s address some of the other pieces of the Prince That Was Promised prophecy. In the third book, A Storm of Swords, Melisandre reveals a few more details: “When the red star bleeds and the darkness gathers, Azor Ahai shall be born again amidst smoke and salt to wake dragons out of stone.”

Some fans thought that the bleeding red star was a reference to the red comet that appeared in the sky after Daenerys hatched her dragons. But during the flashback in which Bran witnessed Jon’s birth in the Tower of Joy, the show seemed to purposefully emphasize young Ned Stark resting Arthur Dayne’s bloodied sword Dawn — the ancestral sword of House Dayne that is said to have been forged from a fallen star — at the foot of the bed in which Lyanna Stark is lying.

As for being “born amidst salt and smoke,” when Jon is killed by his Night’s Watch brothers in the books, his wounds are described as “smoking” and Bowen Marsh cries tears of salt as he stabs him. Therefore, this line could theoretically be attributed to his rebirth, a.k.a. when he is brought back to life by Melisandre. Since Jon is a Targaryen, his resurrection could also fit the bill for waking “dragons out of stone.”

Now, back to Lightbringer. In the original Azor Ahai legend, the hero was forced to stab his beloved wife with the sword in order to impart the blade with its full power.

Since Jon didn’t use Longclaw to kill Daenerys, it’s important to note that while some think Lightbringer is a physical sword, others believe that it’s metaphorical and could even be a person. Lightbringer is described to be a sword made of living fire. So if Jon carries on Daenerys’ memory — “You are my queen. Now, and always.” — for the rest of his days, it could be said that her soul, the soul of a Targaryen, became one with him when she was stabbed like Nissa Nissa’s did with the original Lightbringer. This would lend even more credence to the theory that Jon is the Prince That Was Promised. Not to mention that Jon truly did love Dany just as Azor Ahai loved Nissa Nissa — creating yet another parallel with the story.

A caveat: Given that Martin has yet to release the final two books in his series and Thrones never delved as deeply into the specific details of the prophecy, we don’t know for sure if Jon Snow is truly the Prince. But Jon being the one to kill Daenerys in order to fulfill his destiny as Azor Ahai reborn would very much square with what Melisandre told Dany about the prophecy in season 7.

“The Long Night is coming. Only the Prince Who Was Promised can bring the dawn,” the Red Priestess said. “Prophecies are dangerous things. I believe you have a role to play, as does another — the King in the North, Jon Snow.” 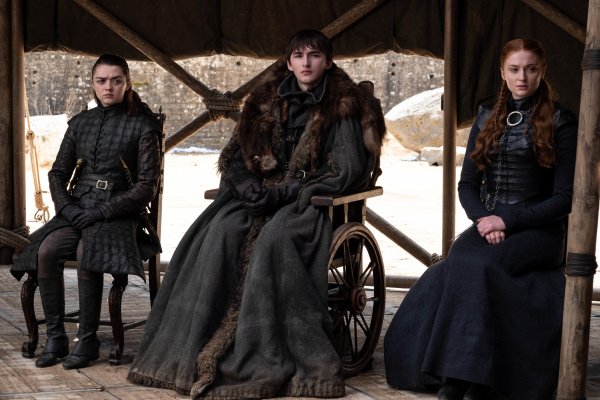 People Had Incredibly Divided Reactions to the Game of Thrones Finale
Next Up: Editor's Pick