How Will Game of Thrones End for Daenerys? Here's What Real Military History Can Tell Us

When Daenerys Targaryen chose to make a fiery, devastating attack on King’s Landing in the penultimate episode of Game of Thrones, some fans may have felt the Mother of Dragons and Breaker of Chains was departing from her character. But her actions were in keeping with a long real-life history of tactical military maneuvers that have razed cities and destroyed civilian populations. And whether or not her massacre was premeditated, she will have to deal with the consequences.

Given that Game of Thrones has often turned to real history for inspiration, what can our own wartime past tell us about what might come next for Dany in Westeros — or what history lessons she might have benefited from before making her attack?

TIME turned to Jesse Tumblin, visiting assistant professor at Boston College, for answers. Tumblin studies war, politics and colonialism — and unfortunately for Dany, his survey of history suggests that her military choice doesn’t bode well for her ruling future.

First, Tumblin points back to ancient history. “We have a lot of accounts of more or less total destruction of cities,” he says, citing the biblical story of the fall of Jericho, during which the Israelites take the city during their conquest of the land God has promised them. To a certain extent, that story mirrors Daenerys’ belief in her own right to rule the Seven Kingdoms. But, Tumblin says, the motivations behind Dany’s sack of King’s Landing and the Israelites’ sack of Jericho are actually an area of difference. Access to land and resources was a key driver for that kind of ancient conquest, but in the Thrones case, Daenerys doesn’t seem concerned about either.

Perhaps an even better example is the famous siege of Troy, which was motivated by something personal: “It’s a fundamentally punitive mission,” Tumblin notes of that battle. (As the story goes, King Menelaus and King Agamemnon attacked Troy to retake Helen, Menelaus’s wife, who had been stolen away by Prince Paris of Troy.) As a result, Troy was “basically wiped off the map” by the Greeks.

Similarly, Daenerys’s attack is fundamentally punitive — in this case, taking back the Red Keep and the Iron Throne from Cersei. She succeeded, as did the Greeks, but now she intends to rule the land whose capital she destroyed. Troy’s disappearance from world history seems like a bad sign for her.

The 30 Years’ War: The Destruction of Magdeburg

Skipping ahead to the period closer to the time Game of Thrones often echoes in look and theme, the 30 Years’ War provides some fair comparisons to Dany’s latest moves.

In the early 17th century, much of Europe was divided into fortified city-states that paid tribute to the ruling Holy Roman Empire. When some city-states began to turn away from Catholicism, war erupted. That was the case in 1631 at the German city of Magdeburg, a Protestant enclave that endured a couple months of siege from Catholic forces before trying to surrender. But as Tumblin notes, as in the case of King’s Landing, the message did not get through. Instead, the attacking forces opened fire — and caused literal fires that burned the city. In the end, despite the surrender, about 20,000 of its 25,000 estimated residents died. The city did not recover for about a century.

“The point of this was to make an example of the city,” Tumblin suggests: other city-states would hopefully acquiesce to the Holy Roman Empire after seeing Magdeburg’s fate.

But, he notes, it didn’t really work. The 30 Years’ War continued for nearly two more decades, rife with similar sieges. Thanks to the role of religion, passions ran high, with few willing to surrender. In Dany’s case, it remains to be seen whether making an “example” of King’s Landing will be effective; it seems possible that the lords of Westeros would, instead of being cowed into surrender, be motivated by her actions to support someone else.

World War I also holds a history lesson Dany could have used.

In 1916, Austria invaded Italy on a mission called the “Strafexpedition,” meaning to punish the Italians for breaking an alliance they’d had prior to the war. But Austria suffered a major defeat, which turned the Italians even further against them and weakened their forces right before they had to face other, bigger enemies. In the Game of Thrones context, the Night King’s army of the dead may have already been taken care of, but Dany may very well have other enemies lying in the wings — like the North. “Watching Dany do something that’s both punitive and cruel, but also potentially politically harmful, has started to turn more characters against the notion of her leadership,” Tumblin says. That strategic miscalculation is not dissimilar from the error the Austrians made in invading Italy in 1916, he says.

World War II: Death From Above

World War II brings the advent of weapons of mass destruction and serious air power. It brings another change too: a new paradigm in which military leaders tried to use civilian deaths to influence political leaders.

This strategy can be seen in the firebombing of Dresden, an attack by Allied forces on the German city, which led to both the destruction of military targets and the loss of civilian lives. Tumblin says one clear lesson from Dresden was that it was a waste of time for the Allies to think civilian deaths might sway Hitler’s hand. “Hitler would have seen Germany burn before he would have surrendered,” he says. And the Axis powers were clearly willing to put civilians at the center of their own attacks from above; more than 40,000 British civilians were killed by Nazi bombs during the Blitz. However, in some ways, the Blitz only strengthened Allied resolve to keep fighting.

The atomic bombings of Hiroshima and Nagasaki by American forces are another example of the mass destruction of cities from above. The U.S. military wanted to avoid a direct invasion of the Japanese home islands, and also to signal to the rest of the world its atomic capabilities, potentially deterring the communist world from later questioning Western military superiority. The former motivation is a difference between real life and fiction; though Dany says she’s showing mercy to future generations, it’s hard to argue she’s saving anyone by opting to destroy the city rather than accepting a surrender. She may, however, be signaling to potential rebels in the North and elsewhere that she still controls the most powerful weapon in Westeros. “She’s saying, ‘Don’t forget: I have [a dragon],'” Tumblin says.

Perhaps more importantly, however, the psychological aftermath of these attacks has continued for decades after the war’s end. Whether the bombing of Dresden was militarily justified is still debated by scholars, and that debate is only intensified when it comes to the question of the morality of the atomic bombings. That kind of attack, whether or not it contributes to a military victory, is not quickly forgotten.

In the cases of Germany and Japan after WWII, the U.S. won the war — and the victory, too. “They are rebuilt, their societies are reconstructed, their regimes are reconstituted, and in ways that are friendly to the U.S.,” Tumblin says. “In a lot of ways, this is the most incredible, improbable and difficult to predict reconstruction project in all of world history: that the utter destruction of the Second World War is both renewed and rebuilt in a short amount of time.”

He cites two critical factors to this recovery: advanced industrial capitalism and an “unprecedented and overwhelming” commitment of resources from the U.S. into Germany and Japan, thanks to policies like the Marshall Plan and an ongoing military occupation.

“It’s not clear what a similar commitment [to reconstruction] would look like in the world of Game of Thrones,” he says. “If you want to do a massive reconstruction project of the capital city you just destroyed, you’ve got to have access to funds.” But Dany is short on cash, the Iron Bank has been lending to the now-defunct Lannisters and all of Westeros is resource-poor thanks to winter and the ongoing conflicts. Add to that the fact that neither the Dothraki nor the Unsullied are necessarily in for a long-haul occupation, and the Northerners are leery of her leadership.

In other words, the most important components of the historical examples of a conquering power rehabilitating its relationship with conquered territories — in this case, the U.S. with Germany and Japan — seems extremely unlikely to be repeated in the context of Thrones.

Mother of Dragons though she may be, history seems to suggest that Daenerys Targaryen may have just destroyed her best hope of a way forward. “It’s kind of hard to see the series ending with her sitting on the throne,” Tumblin says. “There’s only 80 minutes left to tie up all these ends. What are they going to tell us?” 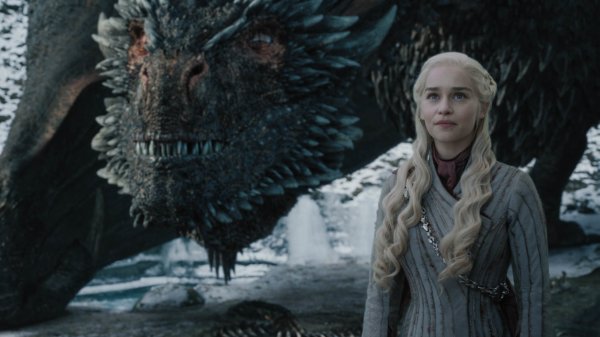 9 Shows to Watch After Game of Thrones Ends
Next Up: Editor's Pick