Julian Assange Could Face Extradition Requests From 2 Countries. What Happens Next?

With WikiLeaks founder Julian Assange likely about to face two separate extradition requests — one already made by the United States on hacking charges, another likely from Sweden related to a recently reopened rape case — his future is less clear than ever.

If Sweden makes a fresh extradition request, the decision over what to do with Assange — who’s currently sitting in a London prison — will fall to U.K. Home Secretary Sajid Javid. In such an event, under U.K. law, Javid would have to weigh specific legal criteria to make his decision. They are:

Those criteria, however, are broad and leave space for individual judgment. “The Secretary of State has to follow the law; it is highly likely that there will a legal challenge if he doesn’t,” says Katherine Tyler, a leading extradition lawyer at London law firm Kingsley Napley.

The point of contention, Tyler predicts, is likely to be the relative seriousness of each offense. Both sides could argue that their case is more urgent than the other. “It’s hard to predict how the Secretary of State will weigh up the seriousness of each allegation. The accusation of rape, being an offense against the person, is a very different kind of allegation to the password cracking accusation which, in this context, will be said to be a political matter,” she says.

Sweden has not yet re-issued a formal extradition request for Assange. But given the nature of the allegations there, some lawmakers are already pressuring Javid to bow to Sweden’s request, if it makes one. “Allegations of sexual violence in Sweden should clearly take precedence,” wrote opposition Labour Party lawmaker Dawn Butler in a letter to Javid on Monday. “The U.K. Government should send a clear message that we are committed to tackling sexual violence.”

Home Secretary Javid, a leading contender for beleaguered Prime Minister Theresa May’s job, has cultivated an image of a hardliner. He welcomed Assange’s arrest at the Ecuadorian embassy in London last month, and last year refused to seek assurances from the U.S. that two suspected ISIS members would not be executed if extradited — a violation of convention in the U.K., where the death penalty is illegal. (Capital punishment is not on the table for Assange, who faces U.S. charges of conspiring to gain access to a government computer with a maximum sentence of five years, though experts say the U.S. may unseal more serious charges at a later date.) Geopolitics may play a role as well. Assange’s arrest comes at a time of increased bilateral tensions between the U.K. and the U.S., with the Trump Administration frustrated with May’s resistance to block 5G wireless infrastructure made by Chinese telecom firm Huawei from the U.K. market.

If anything is certain, it’s that Assange may not leave the U.K. any time soon. “Contested extradition hearings can take a long time,” says Tyler. “I would expect the U.S. request alone to take in the region of a year to 18 months; were there to be an additional request from Sweden, consideration of how to deal with this is likely to make the overall process longer still.” 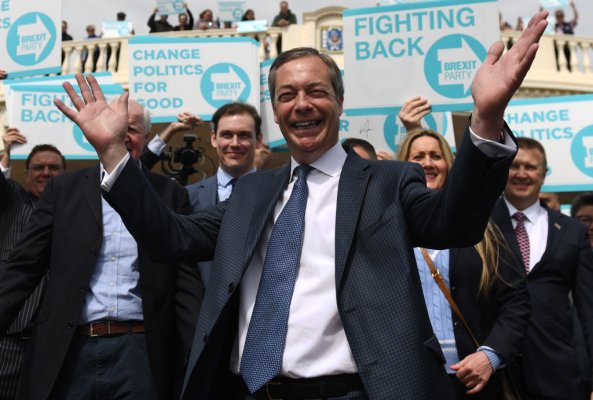 The ‘Brexit Godfather’ Thought He Was Out. But the E.U. Elections Have Pulled Him Back In
Next Up: Editor's Pick