As Daenerys set Drogon loose on King’s Landing and its civilians in “The Bells,” the fifth episode of Game of Thrones‘ eighth season, it became pretty clear that she has officially turned into the Mad Queen she long feared becoming. But amidst the bursts of dragonfire, there were also explosions of green flames that may hint at a tragic ending for both Dany and Jon in the finale.

Throughout the course of Game of Thrones, Daenerys has always been fearful of becoming the same type of ruler as her father, Aerys II “The Mad King” Targaryen. But When Jaime told Brienne the truth about the day he murdered the Mad King in season 3, he revealed that the reason he did it was to prevent the Mad King from burning down King’s Landing and all the city’s people with wildfire.

If Daenerys is so far gone that the sight of her father’s wildfire stores exploding throughout King’s Landing didn’t get her to rein in her vengeful mission, then it’s possible that it’s time for a new monarch slayer to follow in Jaime’s footsteps. As for who that might be, there was no one who appeared more horrified by the dragon queen’s actions on Sunday than Jon — except for maybe Arya.

After seeing the carnage that Daenerys unleashed on the city, Jon may finally be convinced that, just as his sisters Sansa and Arya and not to mention Varys tried to warn him, Daenerys is not be the right person to rule the Seven Kingdoms. But at this point, it seems like the only way he will be able to remove her from the Iron Throne is to kill her.

A major aspect of the Azor Ahai legend that’s part of the Prince That Was Promised prophecy in George R.R. Martin’s A Song of Ice and Fire book series was that Azor Ahai was forced to stab his wife with his sword, Lightbringer, in order to impart the blade with its full power. So Jon killing Dany may lend credence to the theory that Jon is, in fact, the Prince That Was Promised.

According to the prophecy, the Prince is destined to “lead the people against a darkness” with a flaming sword called Lightbringer. “There will come a day after a long summer when the stars bleed and the cold breath of darkness falls heavy on the world,” it reads. “In this dread hour a warrior shall draw from the fire a burning sword. And that sword shall be Lightbringer, the Red Sword of Heroes, and he who clasps it shall be Azor Ahai come again, and the darkness shall flee before him.”

It’s important to note that while some think Lightbringer is a physical sword, others believe it could be metaphorical. But if the “darkness” mentioned is actually a reference to Daenerys rather than the Night King, as many fans assumed, Jon being the one to kill Daenerys would also square with Melisandre’s prediction that both Daenerys and Jon would have a role to play in the prophecy.

Maybe Daenerys’ role just didn’t quite turn out to be what she thought it would. 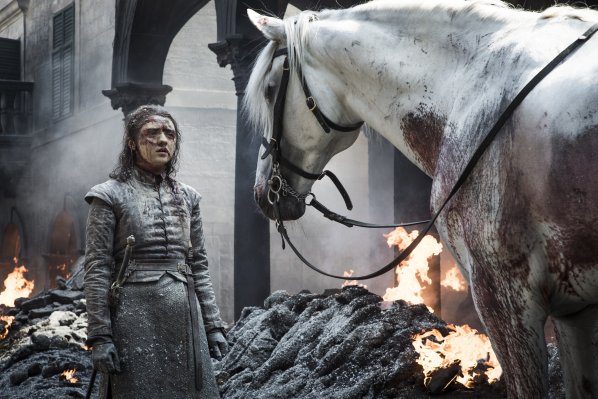 Why Arya's Pale Horse Could Portend Daenerys' Doom
Next Up: Editor's Pick