Rihanna confirmed on Friday the launch of her much-rumored new luxury fashion brand in partnership with LVMH Moët Hennessy (LVMH), the largest luxury goods conglomerate in the world. The new deal makes Rihanna the first woman of color to lead an LVMH label, and cements her position amongst the fashion industry’s biggest names.

The fashion house, which LVMH has reportedly already invested $30 million into, will live under the Fenty umbrella Rihanna has already built out in the beauty business, with Fenty Beauty, and with her lingerie brand Savage X Fenty. She shared the news in a post on Instagram revealing the monogram-ready logo for the brand.

In the year and a half since she launched Fenty Beauty, her first venture with LVMH, Rihanna has demonstrated the formidable popularity of her brand — and its game-changing potential. In 2018, Fenty Beauty — one of TIME’s Most Genius Companies of 2018 — grossed more than $500 million dollars in sales and quickly cultivated a more diverse consumer base than its rivals due in large part to its products and campaigns celebrating inclusivity, and offering a wider range of skin tones.

Rihanna is also not a rookie to the apparel market either. In 2014, she was named a creative director of the sportswear brand Puma under the brand FENTY X PUMA; she has also previously collaborated on collections with the British high street chain River Island, and on a socks line with hosiery and apparel brand Stance.

So while the announcement of a Fenty expansion into an full-fledged fashion house may not come as a surprise, it still marks a significant moment, and milestone for an industry grappling with influencer culture, new revenue streams and diversified customer bases. Here’s what you need to know:

‘Big day for the culture’: Rihanna’s deal marks a shift for the fashion industry

Fenty Maison will be based in France, and will be the first label in the prestigious LVMH stable — which includes Dior, Fendi, Givenchy, Marc Jacobs, and Céline among many others — to be created and run by a woman of color. It has also been over 30 years since LVMH launched a new luxury-apparel brand, the last being Christian Lacroix in 1987.

More than a considerable landmark for the luxury fashion business, the creation of a Fenty fashion house is emblematic of cultural change, especially for a company like LVMH, whose reputation asserts an aspirational aesthetic rooted in European hegemony. “Big day for the culture…,” Rihanna wrote in an Instagram caption celebrating the news. “This is proof that nothing is impossible.”

“LVMH consists of many brands associated with what the French call patrimoine culturel — cultural heritage — or francité,” Rhonda Garelick, a professor and fashion historian at Parsons School of Design, told TIME in an email. “Rihanna enters into this line-up, taking her place alongside venerable, historic, and iconic figures. It is symbolic of a seismic shift in how we view, sustain, and rewrite the canons of European prestige and history. And it signals the growing understanding of the need to embrace new, global definitions of what constitutes prestige, history, and luxury.”

“Given France’s own colonial history, we must not overlook the potent symbolism of a woman of color, from a former European colony in the Caribbean, rising to helm a new luxury brand from this iconic French company,” Garelick said.

European luxury labels have been the slow in diversifying their creative leadership and related branding, from campaign imagery to runway representation. When Virgil Abloh was named was named artistic director of LVMH namesake brand Louis Vuitton’s menswear line in 2018, he became (and still is) one of the only black designers to have ever headed a heritage fashion house.

“Through our partnership at Fenty Beauty, I discovered a true entrepreneur, a real CEO and a terrific leader,” LVMH CEO Bernard Arnault said in a press release announcing the new venture Friday morning. “She naturally finds her full place within LVMH.” Arnault, who at a net worth of more than $94 billion is currently the fourth-wealthiest person in the world, has been a scion in the luxury fashion industry for more than four decades.

“Mr. Arnault has given me a unique opportunity to develop a fashion house in the luxury sector, with no artistic limits,” Rihanna teased in the same statement. “I’m ready for the world to see what we have built together.”

The new venture stands as a reflection of LVMH’s booming business — the company reported more than $14 billion in revenue in Q1 of 2019, a 16% increase in growth in comparison to last year. Furthermore, it illustrates the potential still to be tapped by famous figures and the loyal followings they’ve cultivated.

While celebrity fashion labels are far from revolutionary, Rihanna is likely to be set apart due to the demonstrated reach of her brand (which can only be expanded upon in this new partnership), and the credentials she has already established.

“Rihanna’s value to LVMH lies also in her vast social media following,” Garelick explained. “She has tens of millions of followers… not just for her talent, fame, or beauty, but because she projects a very real, authentic self on these platforms, and takes seriously what her followers say and think.”

Beyond reach alone, the combined industry expertise of LVMH makes this collaboration unlike other celebrity fashion projects. Editor of Womenswear Daily Miles Socha told the Associated Press: “what’s different about this Rihanna project is her partner, which is the world’s largest luxury group, which has expertise across a range of leather goods, perfumes, fashion, beauty — so it really raises the bar for celebrity-led fashion brands.”

While little about the brand has yet to be revealed beyond the logo and a teaser digital presence, eager devotees won’t have to wait long. The first Fenty collection is set to debut in Paris later this summer. 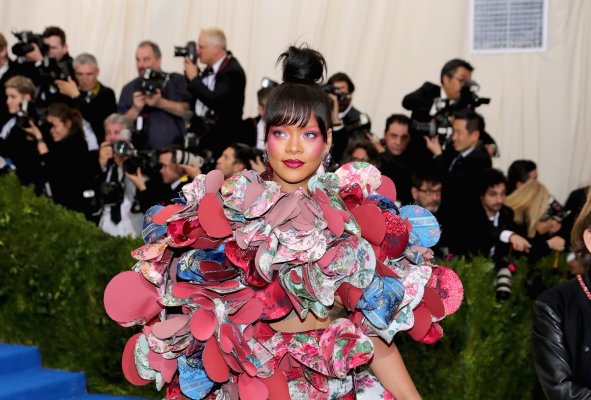