All eyes were on Ezra Miller as he strutted the red carpet at the 2019 Met Gala on Monday in a look that fully embraced this year’s “Camp” theme.

The Fantastic Beasts star arrived at the 2019 Metropolitan Museum of Art’s annual Costume Institute benefit decked out in a Burberry suit, rhinestone corset and matching bejeweled wingtips, and covering his face with a mask of his own face. But the real show-stopping detail was only revealed after Miller lowered his mask to show that his face was painted with five optical-illusion eyeballs surrounding his real eyes.

“The celebration of camp is almost funereal,” Miller told Vice of his look. “It’s almost like it dies as it walks in the room. But I think it consumes the other as well. You know? I think it’s like fire and oxygen.”

Miller collaborated on his surreal appearance — which called to mind the work of artists like Dali and Magritte — with Burberry creative director Riccardo Tisci.

“I had a lot of bizarre thoughts in my brain and was trying to explain them to several people who, in many cases, received it with apprehension, even fear,” Miller said. “Riccardo was immediately super-exuberant and enthusiastic about the notion. We talked on the phone and from what I’m told, two minutes into the conversation he was drawing the look.” 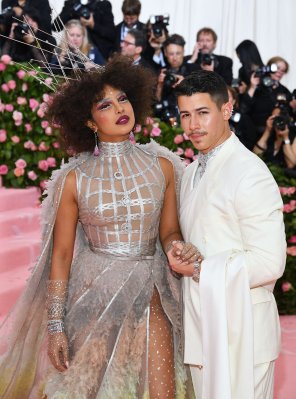 People Were Seriously Convinced Nick Jonas Was Really Game of Thrones’ Littlefinger Invading the 2019 Met Gala
Next Up: Editor's Pick