Celine Dion has arrived to the 2019 Metropolitan Museum of Art’s annual Costume Institute Benefit and she is serving looks.

Though the fashionista’s hit songs came after the peak of campiness, her Oscar de la Renta dress and matching crown prove that she’s ready for the “Camp: Notes on Fashion” themed Met Gala.

The Grammy winner told E! on the red carpet that it took some collaboration with de la Renta and his team to get the cohesive look together. “I was ready to camp and sleep all night. They said, ‘Girl, you don’t know what camp is. Oscar de la Renta’s going to show you,'” she said, according to People.

Just moments after she first arrived to Monday’s event in New York, Twitter users were shaking along with the tassels on the shiny look.

This is only the second time the singer has attended the annual ball. Her previous time as a guest of the event was in 2017. Dressed in a Versace gown, she wore a headpiece then, too. 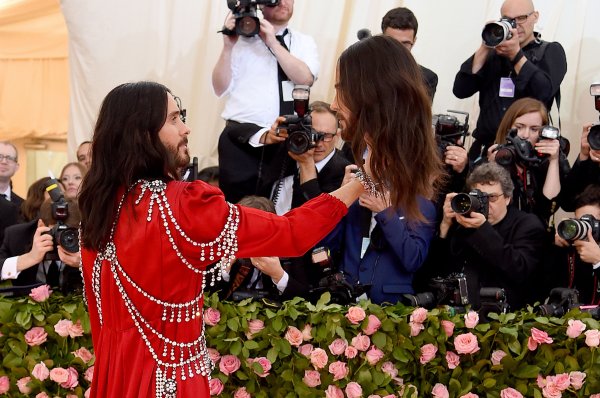 Jared Leto Casually Accessorized With a Replica of His Head at the 2019 Met Gala
Next Up: Editor's Pick