Clashes between anti-government protestors and Venezuelan security forces broke out Tuesday following a call from Guaidó for a mutiny. The demonstrations included one moment when several armored vehicles hit at least two people while driving into a group of opposition protestors, the Associated Press reports. Video footage of the unrest showed protestors running from armored vehicles, defending themselves with rocks and homemade bombs.

Maduro said Tuesday that attempted “coup” by Guaidó was defeated and that the country will never surrender to “imperialist forces” in an address on state television.

“Now you can see Venezuela largely in peace,” he said.

Pompeo, who previously claimed that Maduro was ready to fly to Cuba after the military uprising but decided to stay in Venezuela after being persuaded by Russia to remain, said Wednesday that military intervention could happen in light of the uprising.

“Military action is possible. If that’s what’s required, that’s what the United States will do,” he told Fox Business Network.

Maduro has denied Pompeo’s claim that the Venezuelan president was ready to leave to Cuba. “How crazy can things get? That I, Maduro, had a plane ready to escape to Cuba and that the Russians prohibited me from leaving,” he said during his televised address. “Mr. Pompeo, please. Such a lack of seriousness.”

Pompeo likely warned of military intervention in Venezuela as part of the U.S.’s strategy to apply enough pressure that would convince armed forces in the country to turn against Maduro, says Frank Mora, a professor at Florida International University who previously served as Deputy Assistant Secretary of Defense for Western Hemisphere Affairs with the Department of Defense.

“Their own logic is that if they hit themselves in the chest a lot and have a warlike rhetoric that somehow the military in Venezuela, in order to avoid the alleged intervention, will move against Maduro,” he tells TIME.

Now, both the government and the opposition are pushing forward for more demonstrations. Despite the setbacks, Guaidó has pushed forward in his calls for more protest on Wednesday. And Maduro has called for his backers to rally in support, the AP reports.

Guaidó and Maduro have clashed over who will control Venezuela since January, when Guaidó claimed Maduro’s second term as president, won through an election that many considered rigged, was invalid and counted as a “vacuum of power.” Guaidó declared himself the rightful president of Venezuela, an assertion backed by the Trump administration and at least 54 other countries.

It’s unclear why Guaidó prompted people to begin demonstrations on Tuesday, says Mora. Over the past few weeks, the opposition leader has worked to set the stage for a big demonstration on May 1, in which people were asked to march on to the Miraflores Palace, or the presidential palace.

“It’s important and significant and not something they had done before — a critical moment to see what armed forces would do,” Mora says. By asking people to protest 24 hours in advance, Guaidó surprised everyone, including his supporters, in a call for a sudden rebellion, he says.

Guaidó has worked to get an uprising to take off for about four months to little result, which indicates that the military in Venezuela has little incentive to turn against Maduro, according to Mora. Already, drug trafficking and other issues have caused rampant corruption in the armed forces. Many officers in the military feel they have no option but to stay, he says.

“They have no other choice — it’s either jail, exile or death,” he says. 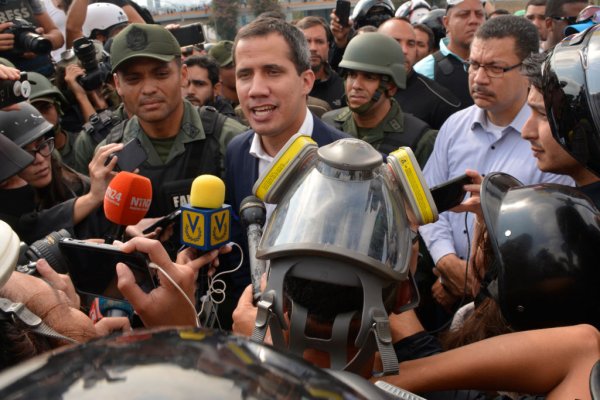