Just when it seemed like there was no hope for the living to defeat the dead in the Battle of Winterfell on Game of Thrones, Arya Stark popped up out of nowhere to kill the Night King. This act, along with a closer reading of her encounter with Melisandre, may hint at an even bigger role for Arya in the show’s final three episodes.

The key to taking down the Night King was the Valyrian steel dagger that Bran gave Arya last season. Using the same hand-switch trick that she first tested out on Brienne, Arya managed to stab him in the stomach despite the fact that he had her hoisted in the air by the throat.

The army of the dead, including the undead Viserion, fell as soon as the Night King — who was the one who had turned them — did, rescuing most of our heroes from almost certain death.

Arya killing the Night King was a surprise for many, except for apparently Melisandre. The Red Priestess had famously told Arya back in season 3 that she would shut many eyes, including blue eyes, forever. The blue eyes she spoke of turned out not to be Melisandre’s own eyes, as some fans believed, but the Night King’s.

In retrospect, it seems that Game of Thrones has long been hinting that Arya would be the one to take out the leader of the White Walkers. When she first began training with Syrio Forel way back in season 1, he taught her the saying, “What do we say to the god of death? Not today.”

Melisandre reminded Arya of her late dancing master’s favorite maxim just before she sprinted off to kill the Night King, a callback that brought Arya’s story full circle.

However, Arya’s defining moment does beg the question of whether or not she — and not Jon or Dany as has been widely speculated — is the One Who Was Promised.

According to the prophecy of the One Who Was Promised, the One, a prophesied savior in the religion of R’hllor who is the reincarnation of legendary hero Azor Ahai, is destined to “lead the people against a darkness” by wielding a flaming sword called Lightbringer.

“There will come a day after a long summer when the stars bleed and the cold breath of darkness falls heavy on the world,” it reads. “In this dread hour a warrior shall draw from the fire a burning sword. And that sword shall be Lightbringer, the Red Sword of Heroes, and he who clasps it shall be Azor Ahai come again, and the darkness shall flee before him.”

Obviously Arya didn’t kill the Night King with a sword, let alone one that was on fire. But if there’s one thing we’ve learned from Game of Thrones it’s that prophecies don’t usually pan out in a literal sense. And with three episodes to go, it’s likely that there’s still plenty we don’t know about the truth of the Azor Ahai prophecy.

Whether or not Arya does turn out to be Azor Ahai reborn, it’s clear that she’s an important figure in the religion of R’hllor. Not only was Melisandre’s fate directly entwined with hers, but we now know that Beric Dondarrion was brought back to life six times by the Lord of Light purely so that he could sacrifice himself to save Arya from death by wight during the battle.

Of course, we also have to find out what Jon’s ultimate purpose is in the Lord of Light’s grand scheme since he was brought back as well. But with Cersei gearing up to go head to head with the survivors of Winterfell, it’s likely that revelations about every unresolved prophecy are about to rapidly be made. 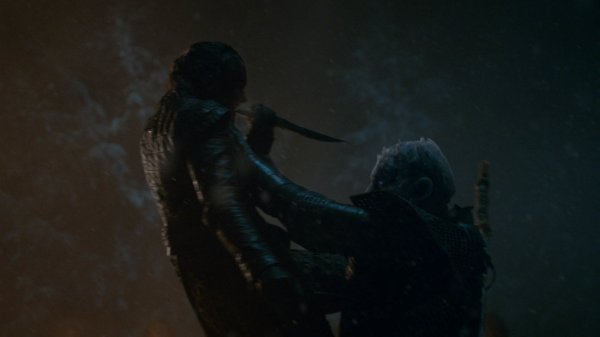 Arya Just Changed Game of Thrones History. Here's How She Did It
Next Up: Editor's Pick