1 Dead, Rabbi and 2 Others Injured in Synagogue Shooting Near San Diego

A woman was killed and three people, including a rabbi and a juvenile, were injured at a shooting in a synagogue in Poway, Calif., on Saturday.

Police say that a 19-year-old white man allegedly entered the Chabad of Poway at about 11:23 a.m. PST carrying an assault rifle. He shot an older woman, two men and a girl. The four victims were brought to Palomar Medical Center at 12:30 p.m., hospital spokesperson Derryl Acosta confirmed.

An off-duty Border Patrol agent opened fire at the suspect as he left the temple, striking the suspect’s car.

The alleged shooter drove his vehicle away from the scene and called the police, giving them his location near Rancho Bernardo Road, north of San Diego, and Interstate 15. Police said the suspect left his vehicle with his hands up and surrendered to authorities without incident. Police say that a rifle was seen in the front seat of his vehicle.

According to a statement from the San Diego County Sheriff’s Department, the older woman did not survive the shooting. A rabbi had surgery from defensive wounds he suffered on his fingers. A 34-year-old man and the juvenile suffered wounds from shrapnel caused by bullets. The statement says that both the 34-year-old man and the juvenile are now doing well and the girl has been transferred to Rady’s Children’s Hospital in San Diego.

Police have identified the suspect as John T. Earnest of San Diego and said that law enforcement could find no prior engagement with him. Authorities are currently investigating his possible involvement in the March 24 arson and vandalism of a mosque in Escondido, Calif.

They are also investigation the authenticity of claims the subject made online of a written manifesto. The Associated Press reports that a person who identified themselves as Earnest posted a long, anti-Semitic message online about an hour before the Poway attack. The message praised alleged shooters in attacks like last month’s Christchurch mosque massacre and last October’s Tree of Life synagogue shooting.

Saturday was the final day of the Jewish holiday of Passover. The Chabad of Poway announced on Facebook on Thursday that it would be holding a celebration at 11 a.m. on Saturday, and a final Passover meal at 7 p.m.

The San Diego County Sheriff’s Department said that there are currently “no known threats to religious gatherings” in the county and that additional deputies have been assigned to religious centers for the weekend.

Poway Mayor Steve Vaus told reporters at a press briefing that the shooting “…is not Poway.”

“We will get through this. Poway will say strong. We will always be a community that cares for one another,” Vaus said.

Police asked that the public avoid sharing misinformation on Twitter, and asked people to check their official account for updates.

President Donald Trump sent the community his “thoughts and prayers” after the shooting.

“Thoughts and prayers to all of those affected by the shooting at the Synagogue in Poway, California. God bless you all. Suspect apprehended. Law enforcement did outstanding job. Thank you!” Trump tweeted.

The President’s comments came a day after he appeared at the annual NRA convention, where he discussed his plans for the U.S. to leave an arms treaty.

Melania Trump also responded to the shooting on Twitter, writing, “On this last day of Passover, I was heartbroken to hear of another senseless shooting in a place of worship. My heart & prayers go out to all affected in the community.”

This is a developing story; check back here for updates. 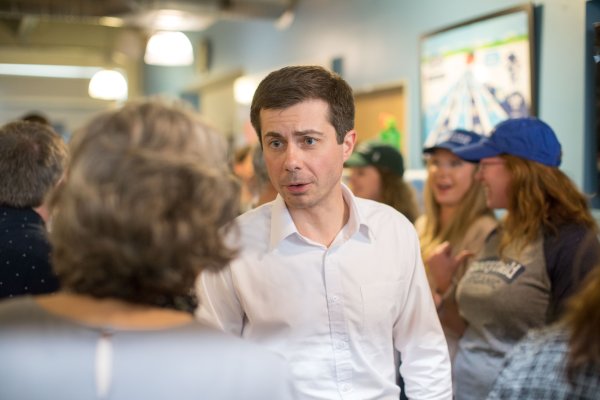 Buttigieg Promises to Return All Lobbyist Donations
Next Up: Editor's Pick