Warning: This interview contains spoilers for Game of Thrones.

Sunday night’s Battle of Winterfell flipped the script on Game of Thrones: the biggest threat in the history of Westeros has now been demolished, with the living suffering heavy losses in their defense of Winterfell. Yet most of the main characters emerged alive — until next week, at least.

That includes actor Jacob Anderson, who plays the loyal Unsullied warrior leader Grey Worm. He’s had quite a run in his five seasons on the hit HBO show, rising up to lead Daenerys Targaryen’s armies as a character of intense devotion and understated strength — not to mention his prowess with a spear. He’s been there ever since the Mother of Dragons bought — and freed — him and his army from the Masters of Astapor in the third season, releasing them from their bonds of slavery, and helping lead in the conquests of Yunkai, Meereen and Casterly Rock before joining the North’s war against the Night King. Throughout, Anderson’s Grey Worm has served steadfastly as Daenerys’s valued advisor, while also developing a tender relationship with her attendant Missandei.

Now that the show is in its eighth and final season, fans believe Anderson’s character’s days might be numbered. But that doesn’t mean he didn’t have some powerful onscreen moments in the first few episodes, sharing a meaningful conversation with Missandei and helping lead the Battle of Winterfell, providing critical support for the priestess Melisandre as she set the trenches ablaze to beat back the army of the dead.

TIME caught up with Anderson the morning after the third episode of the final season aired to discuss Grey Worm’s role in the epic — and brutal — Battle of Winterfell, what could be ahead for Westeros on season 8 and the next creative phase for the actor and musician now that Thrones has finally wrapped.

TIME: This season in episode two, Grey Worm has a beautiful conversation with Missandei about their future together. It’s one of the first times we see Grey Worm think about something outside of his job to protect Dany. How has Grey Worm evolved, and how has that relationship changed him?

ANDERSON: Grey Worm’s entire story arc is like Pinocchio. He’s a wooden boy who has become a person. Miguel [Sapochnik], who directed episode three, talked about this: sometimes fear showcases a person’s humanity. Missandei definitely represents Grey Worm’s fear of dying. I really enjoyed that in episode three, you actually see Grey Worm scared. He’s got something to lose now. That whole thing is very much about solidifying him being a human being now, with his own internal life, and he actually wants something other than vengeance or duty or honor. He’s got a lot to lose.

Before episode three aired, there was speculation it would be a total bloodbath. But amazingly, many characters came out alive. What do you think are the qualities that determine if you live or die on the show?

Basically everyone who died yesterday is just a horrible person to work with [laughs], like Bella Ramsey, who played Lyanna Mormont. Ha! No. At this point, it’s just whatever serves the story. I think Lyanna in particular, that’s such a beautiful metaphor. She’s a young woman who took on a giant, as a hero. I think that as we get closer to the end of the story, we’ll see those moments a little bit more, those full circle moments where you see characters — I’m trying to be careful — where you see characters meet their maker [in a way] that makes the most sense. I don’t think there’s any specific qualification to die in the show; it’s just what worked for the episode. But [in episode three] that’s the most Game of Thrones thing ever: it just completely pulled the rug away from you. We’ve got so used to characters that you love dying that characters surviving feels like a real shock. You don’t get that in most storytelling.

Grey Worm leads the Unsullied in the Battle of Winterfell.
Helen Sloan/HBO

There’s an exchange between Grey Worm and Melisandre just before the battle starts; she says “Valar morghulis” and your character responds with “valar dohaeris.” What did Grey Worm think of Melisandre and her use of the Lord of Light’s power?

Maybe in part it was just him thinking, “Oh, I speak that language!” But he also had seen her before. Mel had showed up to Dragonstone to meet with Dany, so he’s already aware of who she is and what she represents. But I think part of that moment from a narrative point of view was to acknowledge that he saw her setting fire to the arakhs, so when it came to the trench time, he got a smart idea and she went and executed it.

Why do you think that the Dothraki and the Unsullied were first in the line of defense? There have been conversations online about how the show’s characters of color have been placed in some of the most dangerous positions.

Good question. I don’t have a definitive answer for that. From a plot point of view, the Dothraki are the most reckless, and they’ll start with a bit of intimidation, and they will just run into a fight. And the Unsullied, as they’ve proved, have got a tight formation and can create the most solid wall. However, there is precedent in real wars with people of color being put on the front lines and being considered disposable. That kind of thing isn’t lost on me. Maybe in the world of Game of Thrones there is that. There are hints that the North isn’t particularly welcoming of people of color. So I wouldn’t rule that out. But I don’t know if Dany would subscribe to that thinking.

Do you think there’s a conflict between Grey Worm’s love of Missandei and his commitment to Dany? What’s next?

I think Grey Worm has proved at this point that he is fiercely loyal. He will fight to the death for Daenerys. I think that conversation in episode two with Missandei — it’s more like, it’s once the queen has got what she deserves, then we’ll go. I don’t think he wants to duck and run now. He’s sacrificed thousands of his own men for this war that he has nothing to do with, that he has no real stake in. To Grey Worm, they’re not random disposable soldiers. They’re people and he’s responsible for them. So I think that sets up an interesting question, of whether or not that makes him want to take it to the next level or get away.

Which character do you think Grey Worm would lose out to in a one-on-one battle?

Arya Stark! Her spear skills were amazing. I thought it was tied, me and Pedro Pascal, for spear guys. But Maisie [Williams] left us both in the dust. Arya Stark, no question.

What was the toughest part of filming the Battle of Winterfell?

It was the most challenged I’ve ever been in acting. In some ways it was miserable. You’re fighting in armor without much rest, for just a few seconds of footage. And you’re out of focus in the background. It was a lot of nights the whole night; three or four consecutive nights in a row. But Miguel [Sapochnick] really gave us all the sense of a greater purpose. He’s got such relentless focus. I had moments [watching] last night where I was like, “How did they make this?” Even though I was there. I cannot overstate how incredible every single person that worked on that episode really is. Every single person pushed themselves past their limits. We were not sleeping; you get home to the hotel at like 6 a.m. And you go back to work at 4 [p.m.] I did maybe 20 of the 55 nights; they did that every night. They put their all into it.

You’re also a musician under the name Raleigh Ritchie. When we spoke last summer, I asked what the mood of the album would be that best describes this season of Thrones; you said “really secret.” Now that we’re looking to the second half of the season, what do you think the mood of the album is that you’d write?

Now that Thrones is done for you, what’s next?

The album is pretty much done now. I feel pretty confident in saying it will be out this summer. I’m waiting a little bit until Thrones is finished before putting it out; I want a little bit of distance.

Will you have a listening party with the cast members?

No, I would never have a listening party! That’s super awkward. Having to watch other people listen to or appraise something you’ve done is the most uncomfortable experience you could ever have. You feel bad, they feel bad because they’ve got to tell you it’s great, so no, there will be no listening party! 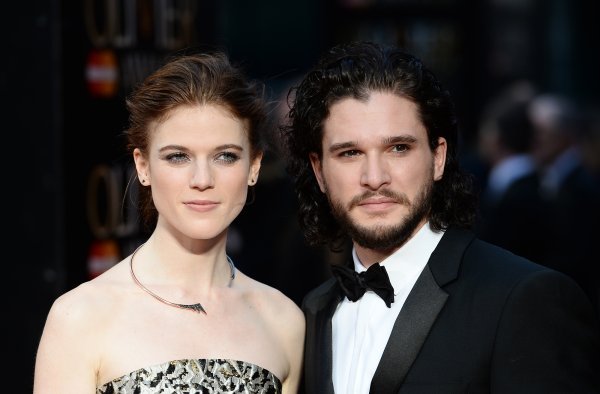 Kit Harington's Game of Thrones Favorite Scene With Rose Leslie Might Make You Weep
Next Up: Editor's Pick