Exactly How Old Are the Characters on Game of Thrones?

In the second episode of the season 8 of Game of Thrones, Arya proved that she’s grown up since the first season when she ran through the crowds at Winterfell sporting an oversized helmet. Not only has she evolved into an impressive warrior but a woman who knows what she wants: The night before the Battle of Winterfell, Arya seduces Gendry because she “wants to know what it feels like” before they face their death the next day.

The encounter left a lot of fans wondering: How old is Arya Stark? And while we’re on the topic, how old are the characters who began as children on the show and grew up before our very eyes? One important thing to note: The HBO TV series aged up several of the characters from George R.R. Martin’s books. Here’s a guide to characters’ ages during season 8 of Game of Thrones.

Arya says that she’s 11 years old on the first season of Game of Thrones. The show has moved at about the pace of one year per season, which means that Arya is currently 18 on Game of Thrones. Maisie Williams, who portrays Arya on the show, is 22 in real life.

Sansa Stark is two years older than her sister Arya, which means that she’s about 20 years old on the show. Sophie Turner is 23 in real life.

Bran Stark states that he is 10 years old in the first season of Game of Thrones, which means he’s 18 years old on the show — though does the Three-Eyed Raven really have an age? Regardless, Isaac Hempstead Wright, who plays the greenseer, is 20 years old.

Daenerys was about 17 years old when the show began: We hear that it’s been 17 years since Robert’s Rebellion — when Dany was born. So she’s about 24 on Game of Thrones now. Actor Emilia Clarke is 32.

By the same logic, Jon Snow — who was born in the Tower of Joy during Robert’s Rebellion — is also about 24 years old by the time of the Battle of Winterfell. Kit Harington, who plays Jon, is 32 in real life.

This one is a little more complicated. Gendry is the illegitimate son of Robert Baratheon, which would place him somewhere in his teens at the beginning of the show. In the books, he’s said to be five years older than Arya, though the show seems to do away with that math since Gendry states in season 2 that he had worked for Blacksmith Tobho Mott for 10 years. Assuming he was somewhere between the ages of 16 and 20 when the show began, that means he’s probably somewhere between 23 and 27 now. Actor Joe Dempsie is 31.

In the first season of Game of Thrones, Theon says he has lived with the Starks since he was eight years old. In the same season, Ned Stark says the Starks haven’t gone to war in nine years, the last war being the Greyjoy rebellion that ended with Theon becoming a ward to the Starks. So assuming Theon was 17 when the show began, he would be 24 years old. Actor Alfie Allen is 32 in real life. 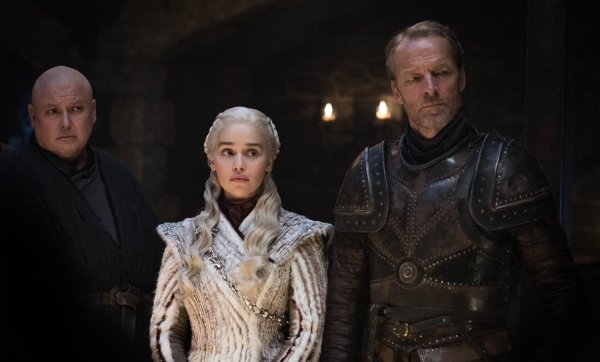 The Best Game of Thrones Memes of Season 8 Episode 2
Next Up: Editor's Pick