President Donald Trump’s lawyer Rudy Giuliani said there was “nothing wrong” with Trump’s presidential campaign taking information from Russia in an interview on Sunday.

“There’s nothing wrong with taking information from Russians,” Giuliani said to CNN’s Jake Tapper on State of the Union, days after special counsel Robert Mueller’s report detailed more than 100 interactions between Trump’s associates and Russians.

In the interview, Giuliani was specifically responding to Tapper mentioning a statement tweeted by Sen. Mitt Romney (R-UT) on Friday. Romney, after reading the redacted Mueller report, said he was “appalled that, among other things, fellow citizens working in a campaign for President welcomed help from Russia—including information that had been illegally obtained.”

Giuliani responded by calling Romney a “hypocrite,” though he did not specify any similar incidents on the part of Romney’s 2012 presidential campaign.

In addition to saying there was “nothing wrong” with Trump’s campaign taking information from Russians, Giuliani also attempted to deflect Romney’s moralistic sentiment regarding the findings of the Mueller report.

“I’d like to take a good look at Romney’s campaign and see if there are any immoral or unethical things done by the people working for him that he didn’t know about,” he added.

Giuliani appeared to express a similar sentiment in a Sunday interview with NBC’s Chuck Todd on “Meet the Press.”

“It is not OK for political campaigns to work with material stolen by foreign adversaries?” Todd asked.

“Well, it depends on the stolen material,” Giuliani responded. 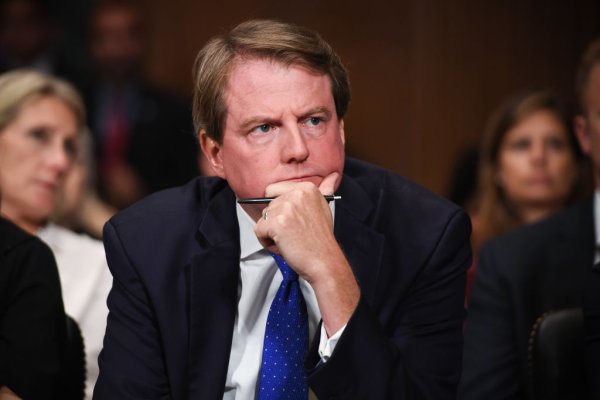 Don McGahn Emerged as a Key Player in the Mueller Report
Next Up: Editor's Pick