Michael Phelps has done it again. No, not another Olympic medal: but another viral face.

During Wednesday’s episode of Today, the most-decorated Olympic athlete of all time spoke about what it was like to watch Tiger Woods’ iconic comeback as he won the Masters on Sunday for the fifth time, but the first time in over a decade.

Phelps, who had an amazing seat for the championship, called Woods’ win one of the “coolest things I’ve ever seen live in sports, and definitely in golf.”

Phelps’ excitement definitely was visible. Some viewers of the Masters in Augusta, Georgia, which Phelps says was the first he’d ever attended, caught a pretty excellent (and soon viral) moment on camera. Phelps had a seat just behind Tiger for his shot at the 16th hole in the tournament.

Phelps told Today just how special that moment felt. “I mean, just watching Tiger come back, watching him be able to do that and get back on top of the mountain, it’s so cool.” And it was even cooler, the swimmer said, because he didn’t have his phone on him during the Masters. Afterwards, he did receive some texts from people who noticed him during the broadcast. His wife, Nicole, captured the moment in an Instagram post as she watched with their son, Boomer, on TV.

During the 2016 Olympics in Rio, the internet fell in love with the #PhelpsFace, an intensely meme-able mug he had on before competing against Olympian Chad le Clos. 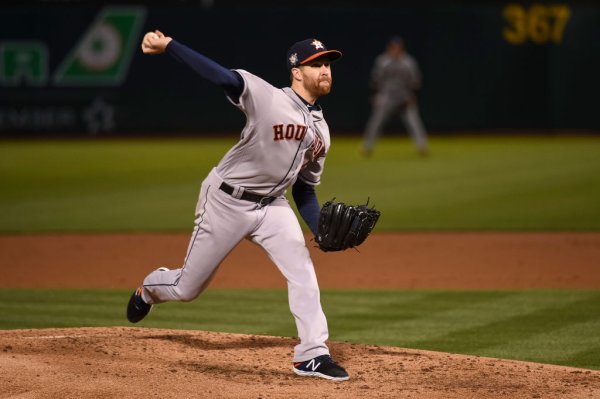 Give This Baseball Pitcher Who Pulled Off the Matrix Move a Trophy Immediately
Next Up: Editor's Pick